2.1 This career episode is based on my engineering activity at the University of Western Australia. It is about an assignment I carried out during the second semester of my master’s degree in the unit “Process synthesis and design”, worth 25 % of the overall grade. The assignment was released on 11 August 2015 and was due on the 18 September 2015.Thus the entire task was completed in just five weeks’ time.

2.2. The project on “Cost Estimation for Meeting Perth’s Water Needs” was carried out as an assignment for the unit ‘Process Synthesis and Design’. I was part of a group of six people. The project required the calculation of CAPEX and OPEX for two different scenarios and comparison of both to determine the suitable one for real life implementation. This assignment involved several design stages along with the study of flow in a pipeline in order to select the appropriate piping and the length required to meet the water requirement over a 50 year lifetime. The project was completed successfully under the guidance of Prof. Mike Johns, School of Mechanical and Chemical Engineering at the University of Western Australia.

2.3 Decreasing annual rainfall and subsequent decrease in water supply had become the talk of media and local government in Perth. This has caused an interest in techniques to supply fresh water to Perth. The project aimed at evaluating two different scenarios to meet with Perth’s increasing water demands. The first scenario considered in the project was a two stage RO Desalination plant that would intake seawater and produce fresh water at 1000 ð‘€ð¿/ð‘‘ð‘Žð‘¦. The second scenario was the design construction of a 2435 km Kimberly pipeline from Argyle dam to Perth capable of meeting the same fresh water requirement per day.

2.4 Some of the core duties I was involved in are as follows: 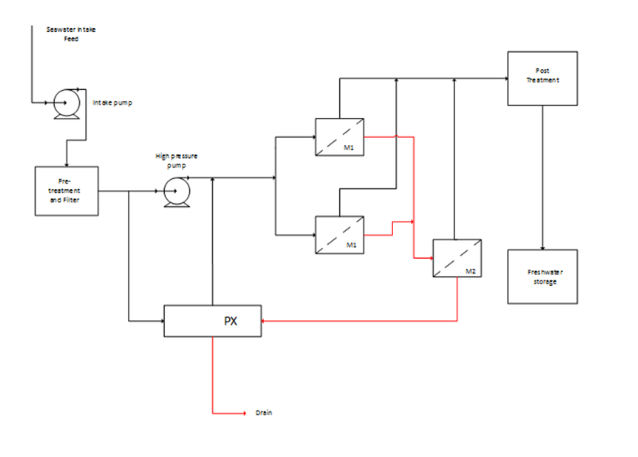 2.6 In order to determine the OPEX, all the steps involved in the process had to be accounted. In order to do so, I broke down the process into independent steps. The first step was the pre-treatment of feed water to avoid fouling in the membrane system. Managing membrane fouling with pre-treatment methods reduces the replacement rate of membranes and lowers the ongoing OPEX costs. The next step involved in the process was coagulation. I chose Ferric Salts as a coagulant because of its tendency to disinfect microorganisms, partially degrade and oxidize the organic and inorganic impurities, and remove suspended particulate materials in a single dosing and mixing unit process. The next step in the process was the passage of feed water through Dual-filters. After extensive research, I decided that the Anthracite bed on silica sand was best suited to remove suspended solids and colloids formed in the ferric salt treatment. Lastly the feed was passed through micron cartridge filters to remove fine particles and bacterial matter before it was processed through a high pressure pump to the membranes.

2.7 The final and the most important step of the process was the selection of membrane. Referring to a number of papers, I found out that the best suited membrane for the specific purpose was the Toray TM820-440 membranes. These membrane elements had a high salt rejection percentage, large flux, low cost and are efficient on energy use to minimize OPEX costs. Before distribution, the permeate needs to be treated to maintain pH and remove corrosion potential. Lime contactors can increase hardness, alkalinity and pH while preventing calcium to leech from pipes into the distribution system.

2.8 I prepared the CAPEX by scaling up the capacity of an existing desalination plant to match the desired capacity. I considered The Perth Seawater Desalination Plant in Kwinana which has a capacity of 45ðºð¿/ð‘¦ð‘’ð‘Žð‘Ÿ and incurred a capital cost of $387 million AUD. I also took Southern Seawater Desalination Plant into consideration in Binningup which had a capital cost of $1400 million AUD and produces 100 GL/year. Of the two, I selected the Binningup desalination plant as it was built much more recently compared to that of kwinana. From calculations, I found that the proposed plant is 3.65 times larger than the Binningup plant and as such, the CAPEX could be approximated to $5110 million AUD.

2.9 Operating Costs can be classified as fixed or variable.

The table below summarizes the OPEX estimation for the Desalination plant.

Parameters such as Reynolds number, relative roughness, pressure drop, volumetric flow rate and pipeline elevation were also determined when selecting the appropriate pipeline for this project. Estimating the appropriate number of pumping stations at remote areas along the length of the pipeline was one of the tedious task in the project as it involved a lot calculations and literature reviews. A different approach to this project was the consideration of solar technology over wave supply to be the best present day strategy at remote areas as the supply of power to pumping stations was not be a viable option by the latter. Unfortunately, these winds are not a reliable option in the interior parts of Western Australia and so would not be a feasible selection for power supply to a potential pipeline. Overall, I was able to achieve all the objectives of the project successfully within the specified time and prepared a final report incorporating all the necessary design calculations, ideas and suggestions which could have improved the overall outcome of the project. A peer review was also submitted at the end of the project as a reflection on how each team member contributed individually for the project.

2.15 This project provided me with a valuable experience and great insight into an industrial project. I gained profound knowledge on process economics and also helped boost my confidence. During the course of the project, I understood the importance of team work and team management. I utilized my engineering knowledge for the successful completion of the project and as a whole, this project served as a stepping stone into the industrial world.