The main objective of this experiment is to become familiar with the primary components of the RankineCycler Steam Turbine Power System. Another objective of this experiment is to understand and be able to analyze the Rankine cycle. In the Rankine cycle, there are four main components. These components include the pump, the boiler, the turbine, and the condenser. In this module, the procedure given to operate this apparatus was discussed. The different types of boilers and turbines used in power plants and their advantages and disadvantages were explored. Lastly, some light numerical calculations were performed to analyze the components of the Rankine Cycler system.

The Rankine cycle is the most common thermodynamic cycle used in electricity generation in the United States. In a Rankine cycle, steam is the working fluid. There are four main components in a Rankine cycle. These components consist of a pump, boiler, turbine, and condenser. The Rankine cycle begins in the boiler in which water is heated to a high temperature and high pressure steam. This steam then enters the turbine, where it expands and turns the blades of the turbine. The turbine shaft, which is connected to a generator, rotates and produces electricity. The steam then exits the turbine and enters the condenser at a much lower temperature and pressure. The condenser than condenses the steam back into a saturated liquid. The water then leaves the condenser and pumped back to the boiler, where the process starts again. A schematic of the four component Rankine cycle is shown below in Figure 1. This basic, four component Rankine cycle is rarely used in application, and instead, a more complicated cycle is used.  In the case of a power plant, components such as feed water heater and multiple steps in both the turbine as well as multiple turbines. In general, a power plant is named after its energy source. For example, a nuclear power plant’s heat source is a nuclear reactor. To properly analyze the Rankine cycle, the energy of each main component is considered. For this purpose, a thermodynamic property of a system called enthalpy is used. Enthalpy is described as the summation of a system’s internal energy and the pressure and volume. In this experiment, the Rankine Cycler Steam Turbine Power Steam will be studied. In this system, it should be noted that there is no physical pump. Instead, the water reservoir sits at an elevated height above the boiler so the water is fed to it due to the gravitational potential difference. For this model power plant, liquid propane is the heat source. Liquid propane is advantageous to use since it has 2.5 times higher energy than natural gas. The boiler used in this system is a shell and tube configuration in which flames pass through the tubes to heat the water. The pressure value is mounted on top of the boiler and the water level is shown on the site gauge. The boiler is connected to the turbine by the steam admission valve. The steam admission valve can be adjusted to control the flow rate of the steam, which turns the blades of the turbine. Figure 1 shows a detailed view of the turbine mechanism.

An image of the Rankine Cycler apparatus with all parts labeled are shown below in Figure 2. A summary and step by step guide detailing the procedures to operate the Rankine Cycler are shown below: 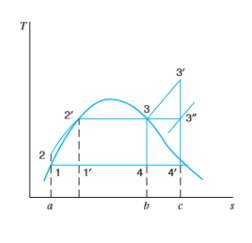 Figure 3 — The relationship between temperature and entropy in a simple steam power plant.

In Figure 3, it can be seen that there are four main processes. From steps 1-2, there is a reversible adiabatic (no heat transfer) process in the pump. From steps 2-3, constant pressure heat transfer occurs in the boiler. From steps 3-4, a reversible adiabatic expansion occurs within the turbine. From step 4-1, a constant pressure heat transfer occurs in the condenser. It should be noted that the liquid can be heated to a superheated state, as shown in the cycle 1-2-3’-4’-1. If the kinetic and potential in the system can be assumed negligible, the heat transferred to the fluid can be represented as the area underneath a-2-2’-3-b-a. The heat transferred from the fluid may be represented as the area underneath a-1-4-b-a [1].

A boiler is a closed chamber that is used to heat fluids, usually water. This fluid is usually brought to a temperature and pressure that causes the fluid to become a vapor. There are many types of boilers that can be used in a power plant depending on the type of power plant. For a solid fuel power plant, a grate boiler, a fuel boiler, or a bed boiler can be used. For a nuclear power plant, a water boiler or a gas-cooled boiler can be used. The type of boiler that is used in the Rankine Cycler is a bed boiler in which propane is the fuel source. In the boiler, water enters and is then heated to a superheated state. The boiler configuration is a fire tube, in which fire heats the water inside the boiler. Boilers that use propane as the fuel source are advantageous because it has higher energy density than other fuel alternatives. Due to this, propane as a fuel source is efficient. However, propane can be disadvantageous to use because it is not environmentally safe and it is relatively expensive compared with other fuel source alternatives. The energy content per unit volume of liquid propane is 95, 067 kJ/m3 [3].

The most noticeable difference between the standard rankine cycle and the Rankine Cycler is that the pump component of the rankine cycle is not included in the Rankine Cycler. To account for this, the reservoir that supplies water to the condenser tower is placed at a higher elevation. Therefore, water will enter into the system due to gravitational difference rather than being pumped from a lower elevation to a higher elevation. Because the work done by the pump is much less compared to the work done by the turbine, the pump contribution can be neglected when calculating the net work of the system. Another notable difference is the fact that the Rankine Cycler is not a closed, continuous process, while the rankine cycle is. In the standard rankine cycle, the liquid that is produced in the condenser step is then pumped back into the boiler. This part is not included in the Rankine Cycler because measurements must be taken regarding the mass of the water. This discrepancy is accounted for by supplying the system with a known amount of water, and having indications on the apparatus when the water runs low.

It is very important to preheat the system. Preheating the system allows the steam lines, valves, and turbine to reach the adequate operating temperatures. It is also important to ensure that the water level of the boiler does not fall below 25 mm mark on the site glass. The boiler and burner may experience serious damage if the water level of the boiler falls beneath this point.

It is given that the system flow meter measures gaseous liquid propane (LP) flow rate to be 6 L/min. The steady state energy consumption per hour can then be determined by using the energy content of liquid propane from the following calculation: Figure 4 — Schematic of the shell and tube configuration of the boiler.

It can be seen from Figure 4 that there are 17 smaller tubes and one main flame tube. The geometries of the boiler are shown in the Appendix. To determine the available volume for water in the boiler, the total internal volume of the boiler is first calculated. This calculation is shown below:

The volume of the flame tubes are then calculated:

Finally, the net internal volume of the boiler can then be calculated by:

Therefore, there is 7141 mL of available volume for the water to flow. If the boiler is filled with 6000 mL, there will be 1141 mL of unoccupied space. The calculation to obtain the water level is shown below.

The location of the water is shown below in Figure 5. Figure 5 — Schematic of the water level if 6000 mL of water are added to the boiler.

It can be seen from Figure 5 that all of the tubes will be covered with water except the top two tubes which will be partially covered.