In this chapter, two study areas are selected for the application of the selected change detection techniques. The first area is a part of Sharm el-Sheikh city. It is located on the southern landfill of the Sinai Peninsula, in the South Sinai Governorate, Egypt, on the coastal bar along the Red Sea as shown in figure (3.1). 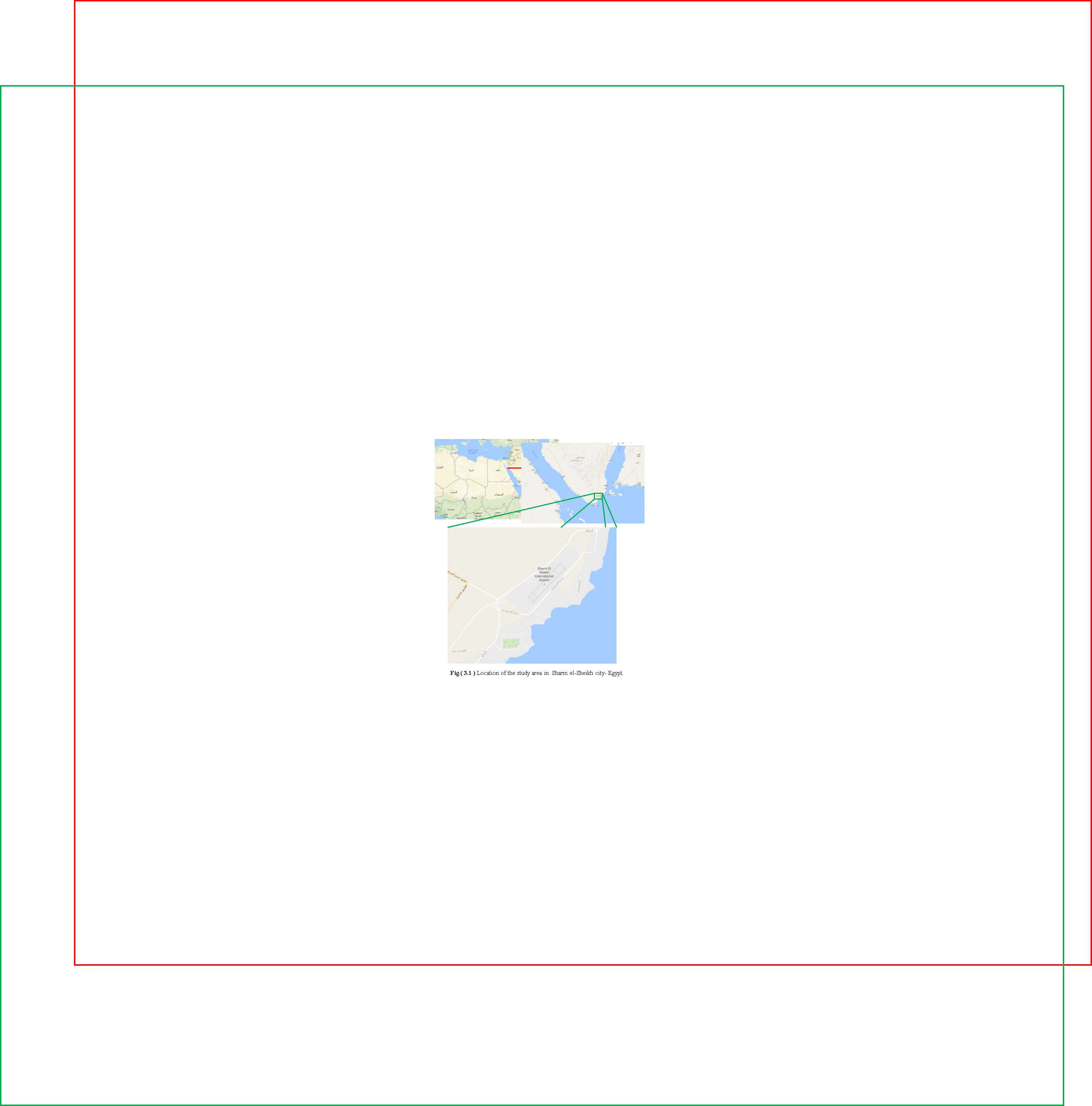 Its population is approximately 73,000 as of 2015 [62]. Sharm El Sheikh is the administrative hub of Egypt’s South Sinai Governorate, which includes the smaller coastal towns of Dahab and Nuweiba as well as the mountainous interior, St. Catherine and Mount Sinai. Today the city is a holiday resort and significant center for tourism in Egypt. The selected area is about 12.5 Km2.

The second study area is a village belongs to El Mahalla El Kubra city. El Mahalla El Kubra is a large industrial and agricultural city in Egypt, located in the middle of the Nile Delta on the western bank of the Damietta Branch tributary, as shown in figure (3.2). The city is known for its textile industry. It is the largest city of the Gharbia Governorate and the second largest in the Nile Delta [63]. The selected area is about 38 Km2.

1.3 Images datasets of the study areas 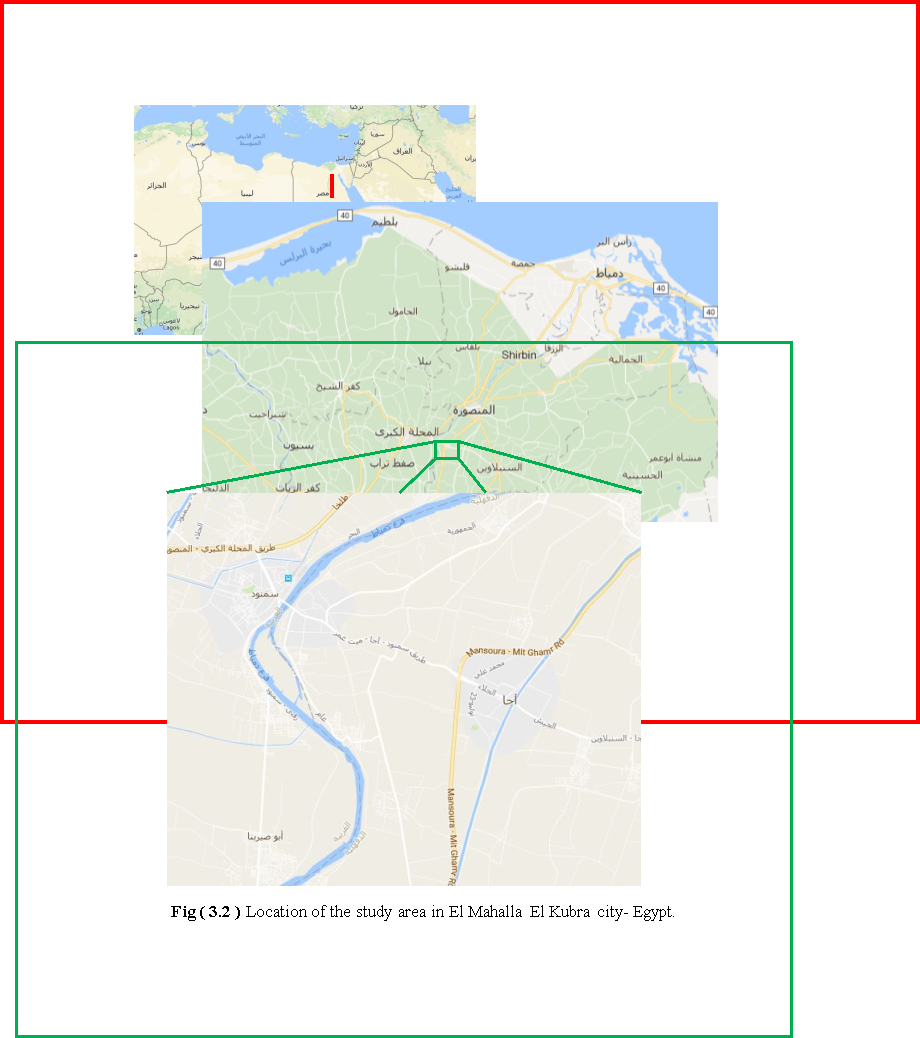 Accuracy assessment techniques in change detection originate from those of remote sensing images classification. It is natural to extend the accuracy assessment techniques for processing single time image to that of bi-temporal or multi-temporal images. Among various assessment techniques, the most efficient and widely-used is the error matrix [26]. It describes the comparison or cross-tabulation of the classified land cover to the actual land cover revealed by the sample sites results in an error matrix as demonstrated in the table (3.3). It can be called a confusion matrix, contingency table [67], evaluation matrix [68] or misclassification matrix [69]. Different measures and statistics can be derived from the values in an error matrix. These measures are used to evaluate the change detection process. These measures are overall accuracy, procedures accuracy and user accuracy [70].

It is a measure of the reliability of change map generated from a CD process. It is a statistic that can tell the user of the map what percentage of a class corresponds to the ground-truthed class. It is calculated by dividing the number of correct pixels for a class by the total pixels assigned to that class.

It is a measure of the accuracy of a particular classification scheme. It shows what percentage of a particular ground class was correctly classified. It is calculated by dividing the number of correct pixels for a class by the actual number of ground truth pixels for that class.

Itis based on the subtraction of two spatially registered imageries, pixel by pixel, as follows:

The pixels of changed area are predictable to be scattered in the two ends of the histogram of the resulting image (change map), and the no changed area is grouped around zero as shown in figure (3.5). This simple manner easily infers the resulting image; conversely, it is vital to properly describe the thresholds to perceive the change from non-change regions [71].

It is similar to image differencing method. The only difference between them is the replacement of the differencing images by rationed images [71].

it is based on the useof symmetric relative difference formula to measure change [72], as follows:

Separating the change by the pixel’s value at time 1 and time 2 permits the derivation of a change map that measures the proportion change in the pixel, nonetheless of which image is selected to be the first image. For instance, a pixel that had a value of 20 at time 1 and a value of 80 at time 2 would have an absolute change of 60, and a proportion change value in the change map of 375%:

In general, it can be supposed that the proportion change of a pixel’s brightness value is more revealing of real change in the image than purely the absolute change  [73].

It generates two outputs: a change vector image and a magnitude image. The spectral change vector (SCV) explains the direction and magnitude of change from the first to the second date. The overall change extent per pixel is considered by defining the Euclidean distance between end points over dimensional change space, as follows:

A decision on change is made based on whether the change magnitude exceeds a specific threshold. The geometric concept of CVA is applicable to any number of spectral bands [41].

It is often accepted as effective transforms to derive information and compress dimensions. Most of the information is focused on the first two components. Particularly, the first component has the most information. The difference between the first principle component of two dates has the potential to advance the change detection outcomes, i.e.

The change detection is implemented based on threshold [28].

It combines the two images (X (t2) and X (t1)) into a single image on which a classiï¬cation is performed. The areas of changes are expected to present different statistics (i. e., distinct classes) compared to the areas with no changes [74].

It is based on the classification of the two images (X (t2) and X(t1)) separately and then compared. Ideally, similar thematic classes are produced for each classiï¬cation. Changes between the two dates can be visualized using a change matrix indicating, for both dates, the number of pixels in each class. This matrix allows us to interpret what changes occurred for a speciï¬c class. The main advantage of this method is the minimal impacts of radiometric and geometric differences between multi-date images. However, the accuracy of the ï¬nal result is the product of accuracies of the two independent classiï¬cations (e.g., 64% ï¬nal accuracy for two 80% independent classiï¬cation accuracies) [74].

This section describes the environment and the implementation procedures of seven selected change detection techniques on the first dataset of Sham el-Sheikh city.

Applying methods described in section 3.5 requires a suitable setup (environment). The setup requirements are summarized in software and hardware. A laptop machine with processor Intel(R) core (TM)i7-4500U CPU @1.80 GH  2.40 GH and RAM 8 GB is used as hardware environment. ERDASD IMAGINE 2014 is selected to be the software environment. It has the Model maker toolbox which is used as a programming language. It is chosen for its ability to combine matrix datasets and multi-dimensional arrays that are used to represent multi-dimensional images, and also for its ability to visualize and interrogate results in an interactive manner. Moreover, it allows providing the integration of the necessary datasets and algorithmic customizations for the development of the described method.

Dataset of EL mahalla al-kubra described in section 3.3 had already registered before. Radiometric correction is carried out to minimize the false change detection by applying histogram matching between the two images. So, the pixel of the no changed areas in one date should take the same or close gray level values of the corresponding pixels in the other date as shown in figure  (3.6) [75].

1.7.3 Implementation of the change detection techniques

The selected techniques are implemented by the model maker in the ERDAS IMAGINE 2014 software for a dataset of Sharm el-Sheikhto provide an overview and assessment of LULC change detection techniques. 250 random variables are used to generate an error matrix to calculate the overall accuracy according to equation (3.1). The reference points are driven visually by comparing the two images. Table (3.4) summarizes the implementation of the selected methods.

The results of applying the selected change detection techniques on the first dataset of Sham el-Sheikh city are introduced in the following:

The change map generated using the image differencing method described in section 3.6 is shown in figure (3.7). The change map has two colors. The white color represents the changed area while the black color represents the no changed area. The change error matrix is generated using 250 random variables as demonstrated in the table (3.5). The reference information is taken visually by comparing the dataset. It is used to calculate the overall accuracy, user accuracy, and the procedures accuracy. The overall accuracy of the change map is 92.4%.