In this literature review, the topic CAD and CAM materials was the main focus of the review. Throughout the review, a total of four aspects were discussed in relation to the topic. Those aspects include processing, structures, properties and performance. In the performance aspect, different types of scanners, which include the optical scanners, mechanical scanners and IOS scanners. Advantages were also provided for the IOS scanner and design softwares where it was discussed is to how they function and operate. The structures aspects touches on the new hybrid structure which was introduced. The properties aspect mainly touches on the hardness as the mechanical properties and translucency as the optical properties. The performance aspect discusses the CEREC system and see the different components of the system and explain how it operates and functions.

The CAD/CAM process in dentistry describes an unintended restoration which was designed by a computer (Computer Aided Design) and was milled by a computer assisted machine (Computer Aided Machined). The very first system was introduced/launched and developed by Duret and colleagues in 1971, but it was not commonly used because of it’s lack of precision of it’s digitizing, computing power and materials. After 10 years, Mormann and Brandestini invented the CEREC System in Zurich, Switzerland (Rekow 1991). The abbreviation form the system was Ceramic Reconstruction. The system was responsible for the exponential increase in demand of CAD/CAM technology through the industry and the world (Liu 2008).

In the last 20 years of the technology’s existence, new and exciting developments have led to the success of dental CAD and CAM technology. Different methods have been gathered to collect 3D data of the tooth using optical cameras, mechanical cameras and design softwares (Giordano 2006).

Processing- As in many other industries, production stages are increasingly becoming automated in dental technology. Dental restorations which are formed with computer assistance have become even more common in the last couple of years. Many different components, such as scanners and design softwares which have been introduced in the field and they all have a significant purpose to making the dentist’s job easier. The more common scanners which are used are called optical scanners, intraoral 3D scanners and mechanical scanners. (Beuer 2008).

There are various types of optical sensors available, which may be used intra and extra-orally. The optical sensor works with an active triangulation process, this is where a sensors captures the patterns of the light and shade which is projected. The receptor of the sensor interprets the changes in depth in the terms of it’s distances, generating a tridimensional image. However, as digitalization of the data is obtained by the reflection of light captured by a PSD sensor (Fig 1), diffusion may interfere in the precision of the digitalized images. This may be minimized, for example, with the help of sprays that must be applied on the surfaces to be copied, especially in the oral cavity (Samra 2016). The need for performing this procedure must be considered in the choice of the data acquisition process.

Intraoral scanners (IOS) are devices for capturing optical impressions in dentistry. They are also similar to other three -dimensional scanners, a light source is projected on to the object that is due to be scanned, in this scenario, it includes prepared teeth and implant scan bodies on the implant, which is used for transferring the 3D implant position (Mangano 2017). The images of the tissues are captured by imaging sensor which are then processed by the software, which then generate point cloud. These clouds are triangulated by the same software which results in a 3D surface model. The surface model of the tissues are the result of the optical impressions (Mangano 2017). The scanner itself offers many advantages, such as time efficiency, elimination of plaster casts and increased and better communication with the technicians.

In several studies which have been conducted in the past, have shown that optical impressions are time-efficient, as they are reducing the working times when they are compared to other conventional impressions. Even though the recent introduction of IOS, with the latest technology that is introduced can complete a full arch scan in less than 3 minutes (Mangano 2017).  With normal conventional impressions which can take a full 3-5minutes. This does not seem like a massive difference, but when added throughout the year it is massive.

In mechanical scanners, the master cast is read mechanically line-by-line by the means of a ruby ball and the three-dimensional structure is then measured. An example of a mechanical scanner in the industry is the Procera Scanner from Nobel Biocare (Samra 2016). This specific type of scanner is established by it’s ability to scan at a high accuracy, this is where the diameter of the ruby ball is set to the smallest grinder which is present in the milling system. Design Softwares are mainly provided by the manufacturers for the production and to design various dental restorations. With this type of software being available to dentists, crown and fixed partial dentures frameworks (FDP) can be made (fig 2); some systems also offer the function to design full anatomical crowns, partial crowns, inlays, inlay retained FDPs. The software of CAD/CAM systems presently available on the market is being constantly improved. 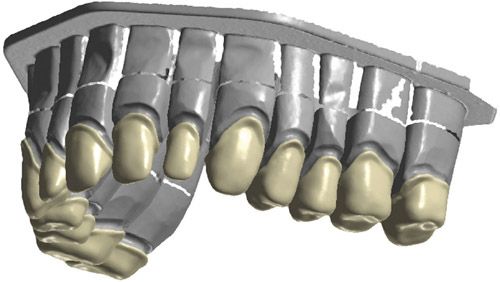 Mechanical properties mainly include it’s hardness. Hardness of a material is defined as the resistance to permanent deformation. The testing for hardness is completed by applying a secure load to an indenter, which then forms a symmetrical shaped indentation on the surface of the material, which is finally then measured by a microscope (Palin 2017). The values of hardness are then calculated using the dimensions of the indentation and the load applied. Overall, there are multiple methods for the testing of hardness of a material (Alhenak 2015). The Vickers hardness is test is more commonly used in the dental. It consists of a 136-degree diamond pyramid-shaped indenter under a standardized force, to produce a square indentation, which are also then are measured under the use of a microscope. Hardness is a vital property when restorative materials are compared. The hardness of the restoration may indicate the level of abrasiveness of a material against the natural dentition. Now, moving on to the next importance property, which are optical properties.

Optical properties which include translucency. Translucency has been characterised as the one of the primary optical characteristics to achieve a good match to a natural tooth structure. (Alhenak 2015). Translucency occurs when light partially spreads or reflects while passing through an object. More the light that passes through the tooth structure, the translucency of the material increases. The translucency of a natural tooth is evident when a noticeable amount of light passes through its incisal and/or proximal aspect due to the presence of a high proportion of enamel compared to the underlying dentin. Now to discuss how the performance of the CEREC system and see the different components of the system and explain how it operates and functions.

The CEREC systems starts with an optical impression of the preparation and antagonist teeth. The Optical impression of is captured by an IOS camera, which then sends the image of the prepared teeth right into the software of the system (Constantiniuc 2014). The finished product is the equivalent of the actual clinical situation, which then appears on the screen in a 3D view, which then offers the opportunity to picture the appearance of the dental preparation.

The system is able to detect limits of the preparation, but there is an second option where it is possible for the practitioner to manually keep track off all the limits. The system is also able to plan the occlusion using an algorithm which is based on a biomechanical principle which is similar to natural dentition eruption (Constantiniuc 2014).

Components of the CEREC System-    All images/info was found and used here are from (Constantiniuc 2014).

The CEREC system is a modular system which is consisted of two units which is connected Hertzian waves; the first image used is for acquisition (Fig 5) and the second (Fig 6) for the production of dental restoration. 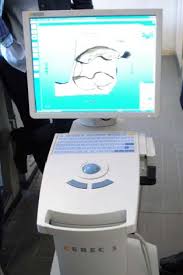 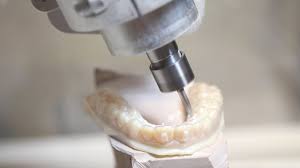 The milling device is equipped with two diamond burrs, which have conical and cylindrical shape. The cylindral diamond burr performs under a jet of water, which results in a speedy and concise modeling  of the ceramic block. (Fig 7) The burr allows reproduction of the fine details of occlusal morphology. 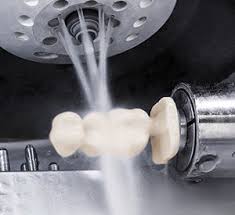 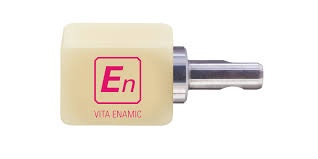 Using supportable and biocompatible materials, which is associated with correct dental preparation, with the use of the CEREC systems provides prosthetic repair with superior durability. Primarily, fine- structured feldspathic ceramics were exclusively used, this is due to the material’s mechanical properties which reduces crack propagation. The fedspathic porcelain is then joint together with different manufactured crystals which are processed through the CEREC system. (Fig 8)

Besides fedspathic porcelains, there are a wide range of options to the type of materials available for CAD and CAM materials for dental; zirconium oxide, aluminium, lithium disilicate, synthetic materials, precious and nonprecious alloys. The choice for which material is used, followed by certain requirements that also include the advantages of these materials:

To sum the information discussed, the procedure involved for the CEREC system includes two main stages. The first stage mainly consists in the preparation of the surfaces of the tooth, which is then followed by the optical impression of the dental preparation and the antagonist teeth. Finally, also at this stage, the last form of the prosthetic restoration is designed. The second stage consists of milling and refinement of the restoration which is obtained in the first stage. If the working session is split in two stages, the duration of the clinical phase is reduced. In the final and last stage, adhesive fixation is completed by the practitioner, where the final product (tooth) is inserted with the other 14 crowns (Fig 9). To conclude, a total of four aspects were discussed, processing, structure, properties and performance.  The processing aspect discussed the different types of scanners, which include the optical scanners, mechanical scanners and IOS scanners. The structures aspects touches on the new hybrid structure which was introduced. The properties aspect mainly touches on the hardness as the mechanical properties and translucency as the optical properties. The performance aspect discusses the CEREC system and see the different components of the system