Cable stayed bridges around the world are usually experiencing excessive and unexpected vibrations of the main stays, often related to the synchronal occurrence of wind and rain. These large amplitude vibrations have become significant considerations because they induce excessive and unexpected stresses and fatigue in the cables themselves and in the connections at the bridge deck and tower [1]. This final report will represent how the wind and rain affect the cable vibration of cable-stayed bridge and its relationship.

Vibrations of cable-stayed bridges become harmful when a predominant excitation frequency is in the vicinity of a natural frequency of the structural system or structural members such as stay cables, which can vibrate with the deck and the tower or independently from the main bridge. Wind, rain are loads that contain a broad spectrum of excitation frequencies and cause large dynamic amplification of the structural response, especially in these low-damped structures.  It is generally accepted that wind, rain or wind-rain conditions must be present for inducing large-amplitude cable motion [2].

The current understanding of the nature of these problematic vibrations and the environmental factors that induce them is based on a limited number of field observations. Typical amplitudes and frequencies of vibration have been reported; the vital role of rainfall in inducing vibration has additionally been reported, along with recommended correlations with wind speed and wind direction. However, these observations have not always been in agreement. Early reports suggested that the vibrations occur only during rainfall [3], while subsequent observations on other bridges have revealed vibrations of significant amplitude with no rain [4]. There is also some confusion about the importance of wind direction in inducing vibrations. Early reports indicated that only the cables that declined in the direction of the wind were excited [3], while instances have been reported subsequently of simultaneous vibration of stays with opposite inclination to the wind [4].

Under favorable conditions such as wind at moderate speeds, wind direction at an angle concerning the cable or the cable declined in the wind direction, streams form in the upper and lower surfaces of the cable. The streams change the aerodynamic shape of an otherwise circular cable cross-section, thereby causing aerodynamic instability similar to the one caused in galloping. As the cable oscillates the streams change location, creating oscillatory aerodynamic forces acting on the cable that keep feeding energy to the oscillations [5].

The Fred Hartman Bridge, a cable-stayed bridge, has become a significant architectural landmark in the U.S. state of Texas spanning the Houston Ship Channel. The bridge carries 2.6 miles of State Highway 146, between the cities of Baytown and La Porte. It has two independent steel-girder decks supported by four 436 ft A-shaped towers and 192 steel-stranded stay-cables. Some of the widest decks on any cable-stayed bridge in the world at 78 ft in width are supported by the bridge and see almost 200,000 vehicles cross them per day. The cables, in a fan-type of the arrangement, support a main-span bridge length of 1250 ft and a total span length of 2475 ft [5]. This paper presents statistics computed from approximately 2700 five-minute records generated during the first year of monitoring, before the installation of a temporary restraining system [1]. We will focus on the correlation of cable acceleration with wind speed, wind direction, and rainfall.

One-minute root-mean-square (RMS) values are presented for cable acceleration, as a measure of vibration amplitude. The two parts of acceleration are measured on every stay: in-plane and lateral. The range of the accelerometers is ±4g, and in some cases of high-amplitude vibration, the 4g level is sometimes exceeded. The consequence of this is that the RMS statistic is underestimated for the particular record [1].

Figures 2 shows typical plots of in-plane vibration amplitude vs. wind speed. The responses appear to be velocity-limited, as previously reported [6]. For the stays examined here, the bulk of large-amplitude responses falls in a wind speed range with a lower limit of around 10 mph and an upper limit of 24-33 mph; the precise limits vary from each stay. A few high-amplitude events at lower wind speeds are evident in the figure below, outside the main cluster of high-amplitude responses. Wind speeds did not reach sufficient levels to witness large-amplitude vibrations observed at very high wind speeds by Matsumoto et al. [7]. A general trend of increasing vibration amplitude with wind speed is evident [1]. Figure 4a, 4b, 4c present plots of vibration amplitude of the for different rates of rainfall: no rain, moderate rain, and heavy rain. As the resolution of the rain gauges is limited to 0.01″, some records collected during very light rainfall may not record rainfall during the 5-minute period. These data files were identified by finding measured rain within the close records on that day and eliminating them from the “no-rain” data information. The data presented in Figure 4a, labeled “no rain”, correspond to records collected on days in which no rain was detected in any record [1].

Under no-rain conditions, the vibration amplitudes are relatively small and occur at relatively low wind speeds (Figure 4a). The data presented here are from a stay, which exhibits modest vibration levels even without rainfall – some data points here are in excess of 1g RMS acceleration. Other stays show much lower vibration levels without rain. The observed vibrations do appear to be velocity-restricted, but this is difficult to confirm. The responses occur over a broad range of wind directions, mostly where the stay inclines in the direction of the wind (Figure 5a). 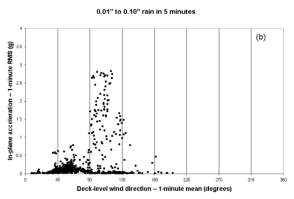 Under heavy-rain conditions, large amplitude vibrations are observed at quite low mean wind speeds (Figure 4c). A relatively small number of data files were recorded with such high rates of rainfall, but in those files that were recorded, nearly all of the instrumented stays were vibrating simultaneously with large amplitudes. These large amplitude events occurred during gusty wind, with a rapidly changing direction, so the dependence on wind direction does not seem important, or the relationship is not clear at this time (Figure 5c) [1]. From the Hartman Bridge data, three distinct regimes of cable vibration have been identified from the full-scale measurements: no-rain vibrations, moderate-rain vibrations, and heavy-rain vibrations. These response regimes exhibit different dependence on wind speed and wind direction, and different acceleration orbits. Relatively low levels of vibration were evident in the absence of rainfall. The bulk of the high-amplitude responses were associated with moderate rain, and the characteristics of these events were similar to those previously reported. High-amplitude vibrations related to very heavy rainfall were observed at comparatively low wind speeds. The observed motions exhibit significant two-dimensionality and participation of numerous cable modes, particularly during heavy rain [1].