Pneumatic systems they are also known as vacuum or pressure systems, the power many functions which are important to the aircraft. Power instrument landing gear, flaps, windows, air conditioning, doors and auto pilot devises are some of many operations powered by pneumatic system. Pneumatic and hydraulic systems are similar and use compressed fluids. Fluid property could be liquids as water, oil, or something that flows. And both liquids and gases flow, since they are considered as fluids; however, there is a great deal of difference in the characteristics of the two.

Liquids cannot be compressible; a quart of water still occupies about a quart of space regardless of how hard it is compressed. But gases can be compressed, a quart of air can be compressed into a thimbleful of space. Considering this differences gases and liquids are fluids and can be made to transmit power. The type of unit used to provide pressurized air for pneumatic systems is determined by the system’s air pressure requirements.

Hydraulic systems are sometimes compared to, pneumatic systems but some similarities can only be true in general terms. Such as

Pneumatic systems do not

But similarities do exist in some components.

Simply an air compressor is a Pump that compresses air, its job is raising air pressure to above established pressure for use in pneumatic systems on some aircraft, air compressors have permanently installed and added to recharge air bottles when pressure is used to operate a unit. Several types of compressors that are used for this purpose. Some have three stages of compression, while the others have two, depending on the desired operating pressure.

Relief valves are used to prevent damage. They act as a pressure limiting units and prevent bursting lines and blowing out seals from excessive pressures. 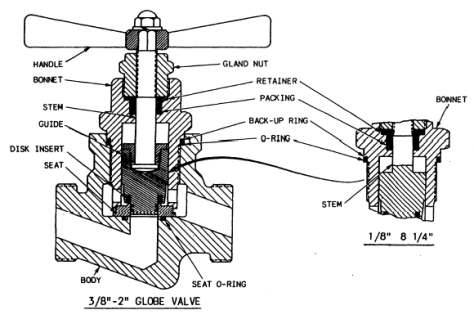 Control valves are also a necessary part of a typical pneumatic system. It is used to control conditions such aspressure, flow,temperature, andliquidlevel by fully or gradually opening or closing. Control Valve is also called a Final Control Element. 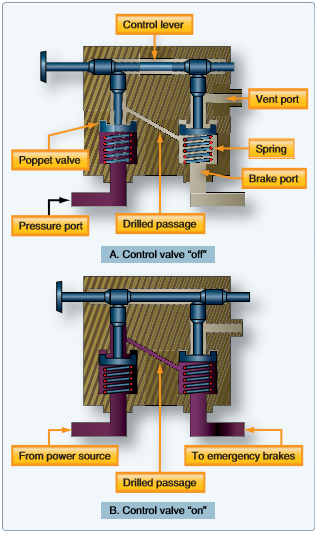 Check valves are used in both hydraulic and pneumatic systems. Check valve is also called a one way valve which allows pressurized air to enter the system, but it prevents backflow of air toward the Compressor when Compressor system is stopped which prevent loss of pressure in the system. 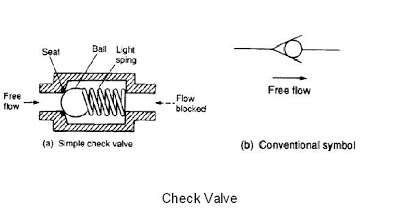 Restrictor is type of control valve used in pneumatic system. Figure below 1llustrates an orifice type restrictor which has a large inlet port and a small outlet port. The rate of the airflow and the speed of operation of the actuating unit will be reduce by the small outlet port. 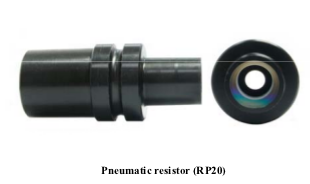 The variable restrictor is a type of speed regulating unit it contains an adjustable needle valve, therefore has threads around top and the lower end. Depending on the direction turned and the needle valve turns the sharp point either into or out the small opening to decrease or to increase the size of the opening. Since air entering the inlet port must be able to pass through this opening before reaching the outlet port adjustment determines the rate of airflow through the restrictor. 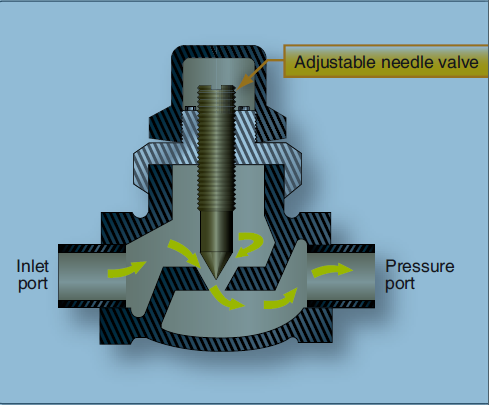 The pressure regulator is to control the maximum pressure in the system and to off-load the compressor when the system is idle. 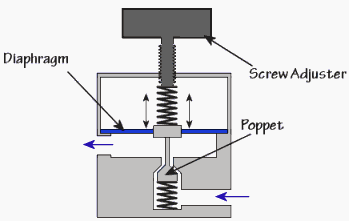 The oil and water trap is designed to remove any water or oil which may be suspended in the air delivered by the compressor. 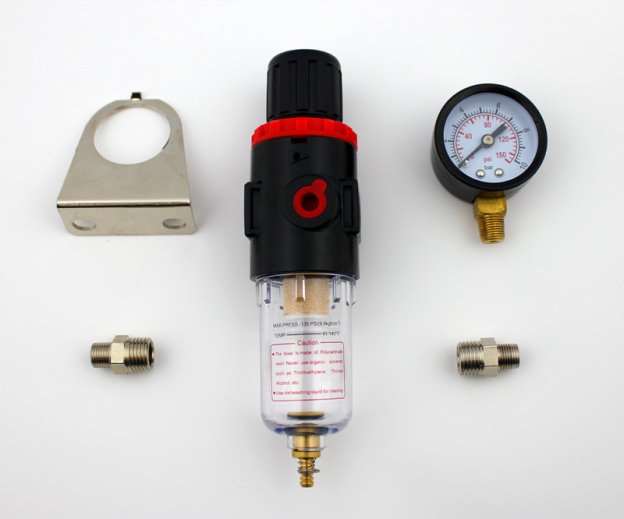 Air filters purpose is to prevent oil vapor, dirt or moisture from passing into the various services. It is installed vertically with the drain plug at the bottom. 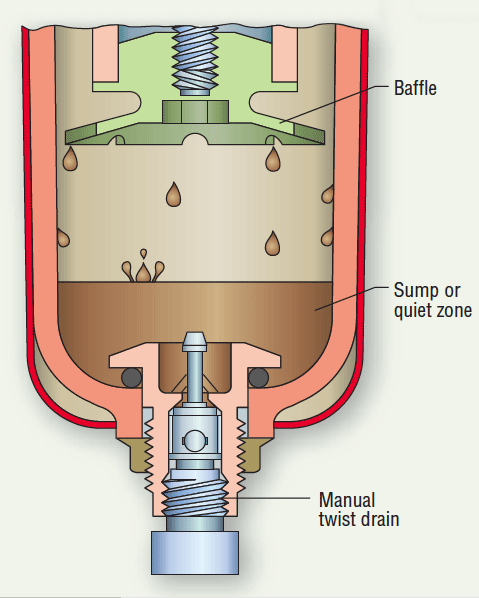 Figure 1. View of Cutaway air filter. Air entering the top of section first flows through the element to remove solid particles. Then flows in a circular motion, where centrifugal force separates water from the air stream, andthen the water falls to the filters sump.

Storage bottles act as a reservoir of compressed air which operates all services to pneumatic system. Compressors main use is to build up system pressure when it falls below normal pressure level. The size of the bottles are taken from the volume of actuators and pipelines determines required for the normal and emergency pneumatic services.

Storage bottles are generally made of steel, and may use a wire wound construction for maximum strength. Light ally or fiberglass materials may be other typs of material wich will be used. 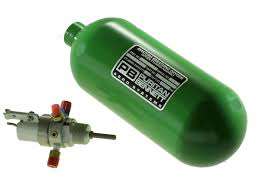 Heart of pneumatic system is pressure or vacuum air pump. Which is usually engine driven)

There are two basic types: •Wet air pumps which use engine oil to lubricate pump internally 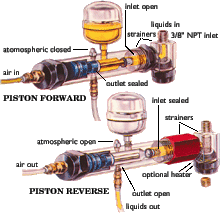 High pressure system is driven by an engine driven compressor feeds air from an unloading valve through the system keeping the pressure. The pressure around this system is 3000 psi but this will vary from manufacturer to another. There will usually also be a ground valve on the aircraft system to enable to pressurize when the main engines are not running. In high pressure systems air is normally stored in a metal bottles at pressures from 1000-3000 psi, depending on the particular aircraft system.

Some high pressure systems are

Low pressure systems are pressurized up to 1000 psi and uses an engine driven vane type pump. They are may be used to drive

A medium-pressure pneumatic system usually does not include an air bottle. Instead, it draws air from the compressor section of a turbine engine. Which is generally around 50 to 150 psi This is often called bleed air process and is used to provide pneumatic power for engine starts, engine deicing, wing deicing, and in some cases, it provides hydraulic power to the aircraft systems but only if the hydraulic system is equipped with an air-driven hydraulic pump. Engine bleed air is also used to pressurize the reservoirs of the hydraulic system.

There are two bottles of nitrogen stored for emergency use, mostly bottles located on each side of nose wheel well. Actuation of an outlet valve released by Nitrogen from the bottles. Once depleted, maintenance personnel must recharge the bottles. Fully serviced pressure will be approximately 3,100 psi at 70 °F/21 °C, which is only enough for one extension of the landing gear.

The illustrator below is a typical full pneumatic system as is used on a twin engine commuter transport aircraft.

Each procedure is shown below in dot points

In a failure of the hydraulic system, the pilot of a large aircraft can operate a pneumatic valve on the instrument panel and direct compressed air or nitrogen into the brake system. When the pilot turns the handle, a regulator is adjusted that controls the air pressure to the brakes. When sufficient pressure reaches the brake line, the piston moves up against the force of the control spring and shuts off the inlet valve. The compression of the spring determines the amount of pressure supplied to the brake. When the brake handle is rotated in the direction to release the brakes, the air is exhausted overboard.

Then rather than allowing compressed air to enter the wheel cylinder, which would require the entire brake system to be bled of air, the emergency air may be directed into a transfer tube. The air forces hydraulic fluid from the tube into the brake system.

Emergency operation of the brakes is also achieved in many aircraft by the use of compressed air. When the pilot is sure that there is no hydraulic pressure to the brakes, the pneumatic brake handle, located on the left instrument panel, can be rotated. Clockwise rotation of this handle increases the brake pressure. Nitrogen pressure released by this control handle forces hydraulic fluid in the transfer tube into the main wheel brakes through shuttle valves. When the brake handle is rotated counterclockwise pressure is released and the nitrogen is exhausted overboard.