“Smart materials are reactive materials. Their properties can be changed by exposure to stimuli, such as electric and magnetic fields, stress, moisture and temperature.”(BBC UK)

The smart material can of

In construction these sort of materials are used to achieve the desired strength, they should be economical and prove beneficial to the environment and to the stakeholders. A large number of innovations are seen in this modern world e.g. self healing concrete ,green cement ,carbon neutral cements etc.

The materials , which have been recently invented by two MIT students and Professor Carmen Trudall are eco blac brick and Breathe bricks respectively. The detailed analysis of such an inventions are discussed below

Brick is mostly considered as a major component of a building. It is found generally in a rectangular shape with different dimensions. They are famous for their strength at low cost. These bricks when introduced to high temperature during their manufacturing. These kilns are mainly operated by coal and diesel resulting in harmful waste affecting both the environment and the people working in these kilns.

Currently the modern world is facing some serious environmental issues , which is resulting in global warming . the fuel used for these kilns are the major contributors to the pollution and the environment is exposed directly to them. In today’s day ,the think tanks of the industry and the environmental agencies are trying to make building more greener and at least carbon neutral. Moreover, recently a Chinese artist made a brick from the pollutants entrapped in the air. This shocked the whole country and then the authorities came into action and started to take the environmental issues seriously.

For the purposes mentioned above ,it is important to use these sort of bricks to make the environment more greener.

The idea of these bricks was first introduced by the students of MIT with the aim that how to manufacture bricks without using kilns. 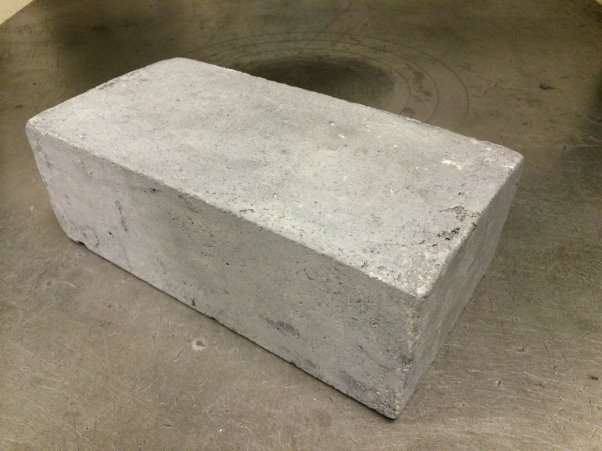 These bricks are mainly made from boiler ash. Boiler ash is an ash produced by the burning of various materials, mainly paper ,wood etc in the factories or anywhere else. Boiler ash is mainly dumped in the land ,resulting in clogging .

The boiler ash is combined with the alkali activation technology .This technology utilizes the boiler ash as an alumino-silicate,fusing it with an alkaline activator solution. When they are combined, the ash dissolves, followed by the construction of a geo-polymer gel, a solid 3D network that gives the bricks strength and durability. This solution reuses industrial waste (70% in the current model) rather than topsoil, and is low-cost and low energy. By using a chemical reaction rather than firing, the bricks gain strength at ambient temperatures, not requiring the massive consumption of coal (roughly 24 million tons annually) in traditional clay-fired brick production. This process also produces no emissions, unlike the traditional kiln technology, which produces carbon dioxide (roughly 76 million tons CO2/ year), carbon monoxide, sulphur dioxide, nitrogen oxides, black carbon, and particulate matter.(arch daily)

These bricks when subjected to different test , had more durability, showed more water resistance and had more compressive strength then the normal clay brick.

Some features of these bricks are:

Breathe bricks are invented by a Carmen Trudell, an assistant professor at Cal Poly San Luis Obispo’s school of architecture . 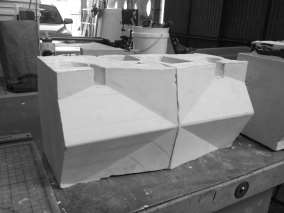 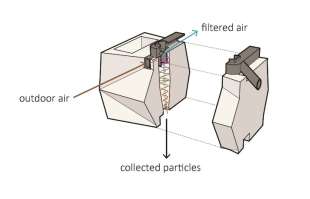 The Breathe Brick is designed on an idea to form a part of a building’s regular ventilation system, with a double-layered facade ,exterior of the building is made of these special bricks , accompanied by a standard internal layer providing insulation. At the mid , the breathe brick’s function is cyclone filtration, an idea inspired from modern vacuum cleaners, which separates out the heavy pollutant particles from the air and drops them into a removable hopper at the base of the wall. 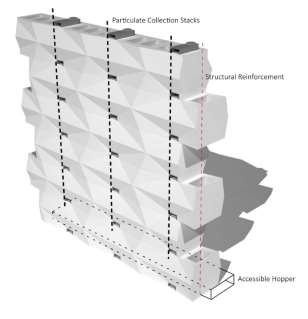 The system is composed of two key parts: concrete bricks, and a recycled plastic coupler, which both helps to align bricks and creates a route from the outside into the brick’s hollow centre. The concrete bricks themselves feature a faceted surface which helps to direct airflow into the system, and a separate cavity for inserting steel structure.

The Breathe Brick can perform multiple functions i.e. mechanical and passive ventilation systems, as the brick simply transports strained air into the walls general assembly, this air can then be sent to the building’s interior through mechanical equipment or through filter vents driven by passive systems such as stack ventilation

In wind tunnel tests, the system was found more efficient filtering 30% of fine particles (such as airborne pollutants) and 100% of coarse particles such as dust. As the entire system is relatively inexpensive, the Trudell posits the Breathe Brick as a way to lower pollution levels in developing countries, where rapid expansion of industry and less stringent environmental regulations often cause problems.

To conclude, the bricks made of clay has strength but are major contributors to the pollution as on other hand the eco bricks which are made from wastes is useful for the environment as well as the people. With equivalent stent as the ordinary bricks these brisk can take over the future and has the ability to replace these bricks in the near future.