In first part, the purpose is measuring the mechanical and iron losses of a synchronous generator or alternator which is most commonly used machine for generation of electrical power for commercial purpose.

In second part, the purpose is determining the ohmic and stray losses of a alternator at various speeds and calculating synchronous reactance.

In the last part, the purpose is measuring the response of the alternator (which is operating with the constant excitation and speed) under different kinds of load.

b) Background and Theoretical Discussion

The most commonly used machine for generation of electrical power for commercial purpose is the synchronous generator or alternator. An alternator works as a generator when its rotor carrying the field system is rotated by a prime-mover which in this case is DC shunt motor. The terminal voltage of an alternator changes with load.

Alternators are by far the most important source of electric energy. Alternators generate an AC voltage whose frequency depends entirely upon the speed of rotation. The generated voltage value depends upon the speed, the dc field excitation and the power factor of the load.

As the DC field excitation of an alternator is increased, its speed being held constant, the magnetic flux, and hence, the output voltage, will also increase in direct proportion to the current. However, with progressive increases in DC field current, the flux will eventually reach a high enough value to saturate the iron in the alternator. Saturation in the iron means that there will be a smaller increase in flux for a given increase in DC field current. Because the generated voltage is directly related to the magnetic flux intensity, it can be used as a measure of the degree of saturation.

The open-circuit test or the no-load test, is performed by driving the generator at its rated speed while the armature winding is left open. The field current is varied in suitable steps and the corresponding values of the open-circuit voltage varied in suitable steps and corresponding values of the open-circuit voltage between any two pair of terminals of the armature windings are recorded. The OCC follows a straight-line relation as long as the magnetic circuit of the synchronous generator does not saturate. In the linear region, most of the applied mmf is consumed by the air-gap; the straight line is appropriately called the air-gap line. As the saturation sets in, the OCC starts deviating from the air-gap line.

In the end, stator voltages for three speeds as a function of the exciter currents measured(Table 1) when the alternator is running at different constant speeds.

In the last part, after assemble the circuit according to the foregoing topographic diagram, the resistive load was used as the first load, after that experiment repeated with inductive loads and finally with capacitive loads too. Load are connected in star connection. It could be connected as delta connection too but preferred as star connection because the alternator is already connected in star connection too. After loads connections set, value of the dc supply voltage of motor-alternator set increased until nominal speed of the alternator is reached. With the no-load exciter current IE0 (which were founded in first part of the experiment) given to the alternator field, measurements was starts with steps from R1 to R5 value. After that resistive load replaced and measurements repeated for inductive and capacitive loads too (Table 3). 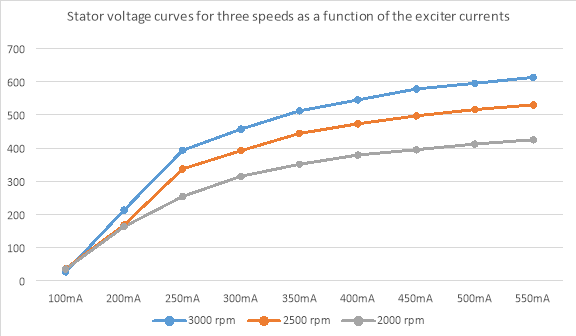 Plot 1 : Stator voltage curves for three speeds as a function of the exciter currents 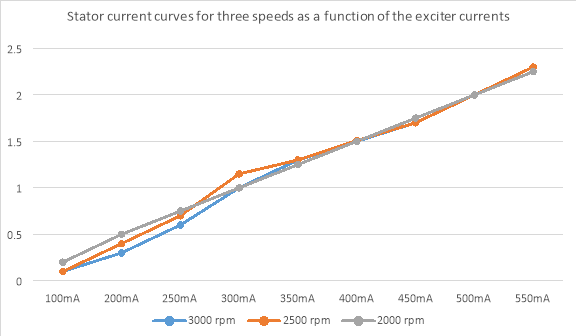 Plot 2 : Stator current curves for three speeds as a function of the exciter currents 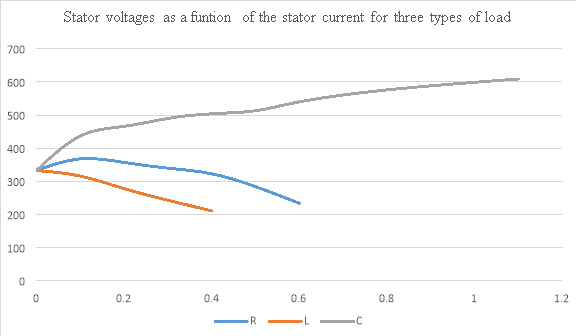 Plot 3 : Stator voltages as a funtion of the stator current for three types of load

In first part, it is possible that, learning about some machine characteristics with no-load test such as mechanical losses and the iron losses of alternator. In addition to that, it is observered that (Plot 1), with constant excitation the no-load voltage is proportional to the speed.

In second part, just like in first part it is possible that, learning about some machine characteristics with short-circuit test such as ohmic and stray of alternator. Also, theoretically it is possible that synchronous reactance could be calculate In addition to that (Plot 2), it is observered that, short-circuit current is independent of the speed of the alternator and is proportional to the exciter current.

In last part, the response of the alternator (which is operating with the constant excitation and speed) measured under different kinds of load. As expected, under capacitive load the stator voltage increases with increasing current, whereas under resistive and inductive loads it drops. Furthermore, in the case of inductive load a more sever voltage drop can be observed than under resistive load (Plot 3).