INTRODUCTION ORIENTATION OF THE PROBLEM

Education is a basic tool used by society for transmission of its societal values and culture. so, every parents are the most immediate relation of a child for their development and growth. Their financial status and education do have an important influence on the personality of child. For instance educated parents can better understand the educational needs and their children’s aptitude. They can help their children in their early education which affects their proficiency in their relative area of knowledge, confidence, idea, etc.

While, Belonging to strong financial background, parents can provide latest technologies and facilities in a best possible way to enhance educational capability of their children as well as they provide good education facilities also. Socioeconomic status is an economic and sociological combined total measure of a person’s work experience and of an individual’s or family’s economic and social position relative to others, based on income and education, and occupation (Marmot, Michael, 2004) indicates When analyzing a family’s social economic status, the household income, earners’ education and occupation are examined, as well as combined income, versus with an individual, when their own attributes are assessed. Many factors and reasons have been given as being responsible for the continuous falling in the academic standard of our present educational system. These includes; attitudes of teachers to work, lack of seriousness on the part of the students, effect of the dwindled economy and to some extent the increasing degenerating moral system.

According to Lareau, Annette ( 2003) observes that Socioeconomic status is typically broken into three categories, high, middle, and low to describe the three areas a family or an individual may fall into when placing a family or individual into one of these categories any or all of the three variables income, education, and occupation can be assessed. Additionally, low income and little education have shown to be strong predictors of a range of physical and mental health problems due to environmental conditions may be the entire cause of that person’s social predicament to begin with. Most economically disadvantaged children have effectively mastered the usual developmental childhood tasks of motor and language skills, and have learned the values of social practices of their homes and neighborhoods (Harry & Klingner, 2007); but they may not have learned particular forms of language or the ways in which schools use specific forms of language to the extent that their middle income peers have. Therefore, it can be assumed that students’ failure to achieve academically may be explained by other factors also. The amount of money that a family has or the color of a child’s skin should not influence how well that child learns (Rothstein, 2004)

These chapter focus on the relevant and related literature of various researches in an attempt to relate their work to this study.

Sub topic related to the literature review are as follows:

While sociology use some broad theoretical sense to explain the concept and meaning of society and its activities. They divide the macro-level society into two broad perspectives, namely functionalism and conflict theory, and then the feminist theory, which combines both micro and micro-levels of analysis, and also the interactions theory, a micro –level analysis which is by far the most influential of the social psychological theories in sociology. (Coleman and Cressey, 1999).The idea make up of the society in such that individual and group of individual is co-exist in the society and make them as a harmony and pace without any threat to the society. Moreover the concept of social and economic problems is that misconstrued by many people.

(ii)Relationship between parents income to the students.

APA ( 2001) describe the relationship of family socioeconomic status to children’s readiness for school, Across all socioeconomic groups; parents face major challenges when it comes to providing optimal care and education for their children. For families in poverty these challenges can be formidable. Sometimes, when basic necessities are lacking, parents must place top priority on housing, food, clothing, and health care. Educational toys, games, and books may appear to be luxuries, and parents may not have the time, energy, or knowledge to find innovative and less-expensive ways to foster young children’s development.

Furthermore,( Ominde, S.H 1964) observes that even in families with above average income parents often lack the time and energy to invest fully in their children’s preparation for school, and they sometimes face a limited array of options for high-quality child care both before their children start school and during the early school years. Kindergarten teachers throughout the country report that children are increasingly arriving at school inadequately prepared.

Families with low socioeconomic status often lack the financial, social, and educational supports that characterize families with high socioeconomic status. Poor families also may have inadequate or limited access to community resources that promote and support children’s development and school readiness. Parents may have inadequate skills for such activities as reading to and with their children, and they may lack information about childhood immunizations and nutrition.

Lareau, Annette (2004) state that “low maternal education and minority-language status are most consistently associated with fewer signs of emerging literacy and a greater number of difficulties in preschoolers.” Having inadequate resources and limited access to available resources can negatively affect families’ decisions regarding their young children’s development and learning. As a result, children from families with low socioeconomic status are at greater risk of entering kindergarten unprepared than their peers from families with median or high socioeconomic status.

Amutabi, M.A (2003) says that the impact of socioeconomic status on children’s readiness for school: while the segregating nature of social class, ethnicity, tradition may well reduce the variety of enriching experience through to be prerequisite for creating readiness to learn among children activates. Similarly, cast ethnic value, housing, neighborhood and access to resource that directly or indirectly affect enrichment or deprivation as well as the acquisition of specific value system

Academic performance of students in the classroom is very important as this is capable of determining whether the student is doing well or not. Parents, Teachers, School Administrators attach so much importance to students’ academic performance that if the students are not performing well academically, then they see all other efforts of the students in the school programme as a total waste. These people pretend as if there are no other activities for the student in the school environment aside the academics, hence academic performance defines the totality of the child in his school life. Contrary to the opinion of this group, it is important that there are many factors that determine the level of a student’s academic achievement, chief among these factors is social adjustment.

1.3 Statement of the problems

According to study published in 2001 issue of Psychological Science found that children of parents with a high socioeconomic status tended to express more “disengagement” behaviors than their less fortunate peers. In this context, disengagement behaviors represent actions such as fidgeting with other objects and drawing pictures while being addressed. Other participants born into less favored circumstances tended to make more eye contact, nods as signs of happiness when put into an interactive social environment. The more fortuitous peers felt less inclined to gain rapport with their group because they saw no need for their assistance in the future. However, Socio-economic status can be measured in a number of different ways. The prime things that commonly it is measured by father’s education, occupation and income.

All family’s socioeconomic status is based on family income, parental education level, parental occupation, and social status in the community such as contacts within the community, group associations, and the community’s academic performance of the family, while families with high socioeconomic status often have more success in preparing their young children for school because they typically have access to a wide range of resources to promote and support young children’s development in day to day life. They are able to provide their young children with high- quality child care, books, and toys to encourage children in various learning activities at home but lack in poor ones. And , they have easy access to information regarding their children’s health, as well as social, emotional, and cognitive development. In addition, families with high socioeconomic status often seek out information to help them better prepare their young children for school and college. The study aimed at finding out the contribution of socio-economic status of the family on the academic performance of the student in private Universities in Punjab, A case study of North-East students in lovely professional university.

To study the relationship between socio- economic status of families and its impact on the academic performance of the students in university.

To study the impact of the level of parents’ education on the academic performance of the students in university level.

To study the impact of family income on academic performance of the students in the various courses in university.

To study the impact of expenditure on children’s education on their academic performance in the university.

To know about the student’s academic performance (TGPA/CGPA) according to their families socio-economic background.

While, according to the availability of data the method adopted for this study was descriptive and statistical in nature. The sample consists of 95 students selected from different courses in the university. Therefore, Out of 95 students 36 were males and 59 were females in age range of 20 to 30 from different schools. To have a comparative study of the boys and the girls ,the sample was drawn from both the boys and the girl’s institutions. Stratified random sampling technique was applied for selection of the students for the sample. Similarly, For a detailed technical discussion of all that will be presented in this section, see Dachs et al (2006) 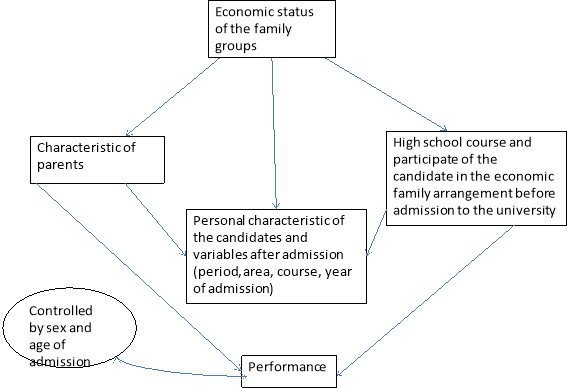 A self designed questionnaire was used for collection the data. First of all, The questionnaires were designed keeping in mind the objectives of the study and the clarity required at the field level for filling the questionnaire. In this study both types of questionnaire are used i.e. closed-ended as well open ended or combination of both.

The primary data was collected through the help of questionnaires. While its carry both types such as closed ended as well as open ended questions and they are self administered. All around 95 of questionnaires ware distributed in different block of the University.

Additional documents were collected by the university faculty and from friends as well.

The Entire data from the field observation was processed and tabulated in the computer unit. However these processes include the writing, interpretation, analysis of data etc. The programmed for the data feeding, coding of data, scrutinizing of data, preparing of table for the report as well as preparing of statistical volume and analytical tools likewise bar diagram, percentages, pie chat etc.