Gender Inequality in Education: Obstacle for Teachers to Fight Against Violence

Violence against women and girls is one of the most systematic and widespread human rights violations. It is rooted in gendered social structures rather than individual and random acts; it cuts across age, socio-economic, educational and geographic boundaries; affects all societies; and is a major obstacle to ending gender inequality and discrimination globally. (UN General Assembly, 2006). Teachers are worshipped as God because the God himself says that the way to reach him is shown by the teachers. In this paper gender inequality is addressed and it is seen that first of all the mindset should be changed that they are not the superior players and they could do anything with anyone and it could be only done by teachers as they will read and try to change the mindset. Census data of Uttar Pradesh is looked up, male and female comparison is done. The latest census data of 2011 is analyzed and it could be said that different scheme are their for the development of females but yet the development is not up to the mark so how come the violence could be decreased.

Violence against women and girls is one of the most systematic and widespread human rights violations. It is rooted in gendered social structures rather than individual and random acts; it cuts across age, socio-economic, educational and geographic boundaries; affects all societies; and is a major obstacle to ending gender inequality and discrimination globally. (UN General Assembly, 2006)

The United Nations defines violence against women as “any act of gender-based violence that results in, or is likely to result in, physical, sexual or psychological harm or suffering to women, including threats of such acts, coercion or arbitrary deprivation of liberty, whether occurring in public or in private life” (General Assembly Resolution 48/104 Declaration on the Elimination of Violence against Women, 1993).

Teacher are said to be an ideal personality for the development of the nation.

A well know proverb is “Guru Govind dono khade kake lagu paay, Balihari Guru aapki Govind diyo batay.” (Sant Kabir) – Kabir wrote this verse to sing the glory of Guru, without whose help, one cannot cross this ocean of worldlylife. He asks, “If both, Guru and God in form of Govind were to appear at the door, whose feet will I worship first?” He answers, “It has to be the Guru’s feet first, because without him, how would I have recognized (known) God?”

Women constitute nearly half of the population of the world. Education of women is considered an important issue in the development of the society and if society is developed it will take active part in the development of the nation. Women are educated than only they will able to look and fight after the negative issues faced by them in a positive manner. If each and every state of the country is educated then only the overall growth of the country is possible.

India comprises of 29 States and 6 Union Territories. Uttar Pradesh is the most populous and 4th largest state of union of India.

Uttar Pradesh is located in the northern part of India. The literal meaning of Uttar Pradesh is ‘Northern Province’. With the adoption of constitution of republic India on January 26, 1950, the state of Uttar Pradesh, cultural cradle of India, came into existence. On November 9, 2000, Uttar Pradesh was divided into two states – Uttar Pradesh and Uttaranchal (later renamed as Uttarakhand) resulting in drastically altering the shape of the state. Lucknow is the administrative and legislative capital of the state while Kanpur is the financial and industrial capital. There are in total 71 districts in this state.

Today scenario it this as female are taking active part for their empowerment but after 15 years it will change a lot means the issues will increase and when one grows at an age of 21 she will have to face too many issues because it will change more fast. The figures stated are government figures and they are politically influenced and not real figures. Tangible perception is different from reality and how this global change is taking place females have to work harder to match up with it.

Educational reforms can play an important role in preventing violence against women by increasing school safety, by empowering women through education, and by promoting better attitudes and practices among students with regard to women’s human rights.

Gender inequality and discrimination are root causes of violence against women, influenced by the historical and structural power imbalances between women and men which exist in varying degrees across all communities in the world.

Violence against women and girls is related to their lack of power and control, as well as to the social norms that prescribe men and women’s roles in society and condone abuse. Inequalities between men and women cut across public and private spheres of life, and across social, economic, cultural, and political rights; and are manifested in restrictions and limitations on women’s freedoms, choices and opportunities. These inequalities can increase women’s and girls’ risks of abuse, violent relationships and exploitation, for example, due to economic dependency and limited survival and income-earning options, or discrimination under the law as it relates to marriage, divorce, and child custody rights.

Violence against women and girls is not only a consequence of gender inequality, but reinforces women’s low status in society and the multiple disparities between women and men. (UN General Assembly, 2006)

Women Education is necessary because if a women is educated she would be able to empower herself for her rights, fight against discrimination, able to take decision concerning herself, contribute to economic growth of nation, will be able to face all scientific and technological changes and will participate in world politics. In spite of all these knowledge and different programs running at Central and State level the Literacy Growth of female is not up to the mark in Uttar Pradesh as per the rules of National Planning Commission. In India literacy rate is calculated if the person is able to read and write but the actual scenario is totally different because literacy is not just reading and writing but one should be able to understand all perspect. The Literacy rate of females of rural area was 36.90 percent in 2001 and 53.65 percent in 2011 which is low as compared to literacy rate of females in urban areas which was 61.73 percent in 2001 and 69.22 in 2011. Gender Inequality is seen clearly in Uttar Pradesh as per the Census data of 2011 which shows that 77.28 percent of male are literate as compared to female is 57.18 percent.

The above Table shows that how the literacy rate had been increased from 12.2 percent to 56.27 percent which is nearly 5 times increment but yet it is not up to the mark. The increase in male percentage is just 4 times which as compared to female is low because female percentage has risen from 4 to 57 which is a good sign but yet it’s below male percentage. This shows that still many females are unable to go to school i.e. the thought of gender inequality is there. So to bring equality for the developed India lot of work is to be done so that ther should be no thought of difference between male and female and violence could be decreased.

Secondly it could be clearly seen that female are unable to go to school for the basic education that how could teachers could take active part to make them aware and ready to face any kind of violence that take place with them. 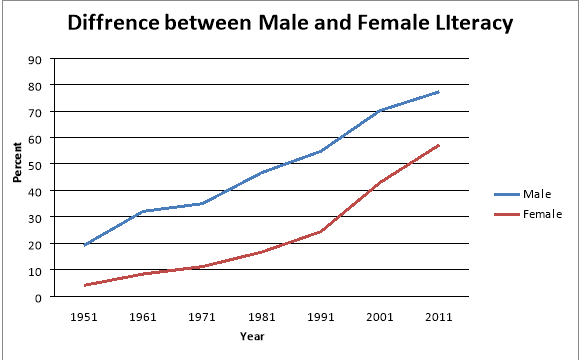 TABLE-2: DISTRICT WISE MALE AND FEMALE LITERACY IN UTTAR PRADESH AS PER 2011 CENSUS

“If you educate a man you educate an individual, however, if you educate a woman you educate a whole family. Women empowered means mother India empowered”. PT. JAWAHARLAL NEHRU. Education is the main source to develop a healthy mindset to face all the good and bad things in the society. Women should be educated so that they could be able to discriminate the up and downs they come to face. Gender inequality should be treated well because if the thought of who is at a superior position should be erased from the mindset than the violence should be automatically decreased. Teachers should take active part in bringing female to the schools and make them aware of the negativities of the societies. Different program’s are being ruined by government for the development of female but yet they are not sufficient some more action should be taken.

Why violence against women and girls happens, and how to prevent it by Michael Flood , August 2007- www.youthforequality.com/education/censusdataaboutliteracy.pdf