To what Extent have Women been Represented Successfully within the Contemporary Australian Graphic Design Industry?

To truthfully answer the research question presented above, in relation to the scope “contemporary”, we must first understand that within the second half of the 20th century the representation of women within the field of Australian Graphic Design was extremely limited. This fact is prevalent despite statistics showing us that on average, 50% of all Australian graphic design university graduates were in fact women (Connory, 2017, 1). Historically, women have faced major difficulties in relation to gaining entry and representation, a fact that is essentially highlighted throughout the 20th century due to prevailing attitudes, patriarchal standards and professional hurdles (Bruce, 1990, 116). Moving forward in time, we observe towards the beginning to the 21st century there has been some progression made in relation to this issue however, in the words of Senior Graphic Designer Antonio Carusone, “Not enough women designers are given the recognition that they deserve” and only revealing one aspect of our history would only succeed in the creation of uninformed designers (Hinn, 2014). With this information in mind we can begin to explore and evaluate the representation of Women in contemporary Graphic Design within Australia by observing a variety of topics such as the importance of design awards, statistical data sets and promotion within the workplace. To successfully answer the question, through visual analysis, we will compare and contrast the work of two separate designers who aim to instil change within this bustling arena of Graphic Design.

The entire concept of awards within the industry is extremely important as it acts a firm statistical pillar that will allow us to objectively view different sets of information in relation to the representation of women in the industry. According to Margaret Bruce and Jenny Lewis, one of the final major hurdles a woman working as a professional designer faces is the difficulty to acquire design significant design awards. It is true that within the canon there have been women who have been presented with said significant design awards however, a large majority of firms are owned by men, a majority of senior positions are held by men and a majority of awards are presented to men (Bruce, 1990, 119).

To further emphasize this key point we can observe the exhibition, “Anonymity” created by Jane Connory through countless amounts of research into the visibility of female graphic designers. Exhibited in Melbourne, this series of posters below visualize and showcase statistical data in regards to the amount of awards won within the Australian Graphic Design Association (AGDA) by female graphic designers based on their design pathway between 1994 and 2015. These seven posters are broken up into seven different fields for designers, namely, Creative Directors, Typographers, Illustrators, Finished Artists, Designers, Art Directors and Judges (Connory, 2017).

The entire concept behind these posters is to fuse all statistical information collected with a physical design element to faithfully showcase the current invisibility of women within the AGDA awards. With each poster we can observe a very straightforward and direct approach to presentation of information in the form of a pie chart. As we can see there are three areas of information, male, female and in some cases other genders. Within each poster the male dynamic is represented by a solid black print with the conventional symbolism of an arrow pointing diagonally then below in white we have the representation of female designers with a cross pointing downwards, perhaps to further showcase that the average female representation throughout this time period has been underwhelming. Adjacent to this diagram in sans serif bold font we are shown the key statistic illustrated through each creation for example “15% of of creative directors were women” (Connory, 2017).

Furthermore, to strengthen the impact of each statement within, Connory uses monochromatic material to completely shade and obscure the information as the data has been printed with black upon black paper, purposefully creating a difficulty in readability. In addition, the black segments of each pie chart was set on white acetate and pressed back within the glass inside the black framing influencing ones ability to gauge said information clearly, visually showing us that the positioning of women within the graphic design industry is also unclear and difficult to read. The audience is further mentally stimulated as they view the data for women represented within white negative space. This point is then further emphasised through visual means as behind the design itself exists a black mount that further conceals all text and creates a distinct shadow again influencing the viewers ability to truly see the data. The idea behind this type of presentation is to challenge the audience, to motivate the viewer to closely inspect the data perhaps symbolizing the idea that the representation of women within the contemporary Australian Graphic Design industry is very low and to gauge that representation requires a great deal of effort. To further compliment this exhibition Connory has created a set of animated gif files to showcase the information within each poster in the aims to move this discussion on to a digital front allowing all audience users to easily share the research in a very convenient and efficient manner (Connory, 2017).

The work presented above by Connory has become pivotal for advancing the representation of women within graphic design but additionally it could definitely be viewed as a project that strongly promotes feministic views. We can define the term feminism as the political, social and economic equality of sexes and the belief that men and women should have the same level of rights and opportunities (Hawkesworth, 2006, 25). Moving forward I would like to compare and contrast the approach of Jane Connory to that of Kelly Doley, an artist, curator and arts manager currently situated in Sydney who has also been responsible for creations that promote feministic views (Doley, 2019). Doley, who was responsible for creating and curating the exhibition : ‘Things Learnt about Feminism’, exhibited a series of ninety-five hand painted posters visualizing knowledge gained from sixteen different lessons by sixteen different participants based on feminism (Groom, 2016).

Furthermore, If we analyse the photograph taken below, we can see each poster aligned together in a horizontal formation across two different walls representing the culmination of multiple different lessons on feminism. This graphical approach in comparison to Connory’s is very different as it incorporates a large amount of colour and much less graphical repetition within each illustrative element in addition to using far more hand drawn imagery. In contrast, each illustration is extremely different to the next in terms of execution but still remains focused on transmitting the core message, promoting the rights of women which in essence is exactly what Connory also aims to accomplish within her own exhibition though she is far more geared towards the representation of women in graphic design specifically. Moreover, we can also contrast the physical elements used within Doley’s work as being very elemental and simple as designs upon single sheet of coloured paper where as Connory placed much more emphasis within the physical construction of her frames to denote the position of women within graphic design awards and create a unique viewing experience for the audience. On the other hand, though there exists a fair amount of contrasts there are also many comparative features that both pieces of work share. Take for example the visual presentation of both pieces, they are both set within and exhibition format intended to engage a physical audience. Both pieces use are graphically dependent on typography and imagery We can also note that there are some posters within Doley’s collection that engage with the same philosophy transmitted within Connory’s work such as the posters shown below. The entire ethos behind ‘Anonymity’ and ‘Things Learnt about Feminism’ are transmit the same message, equality. The lack of female representation within the Australian Graphic Design sphere is due to a lack of equality and without a rise of equality this representation may remain low. 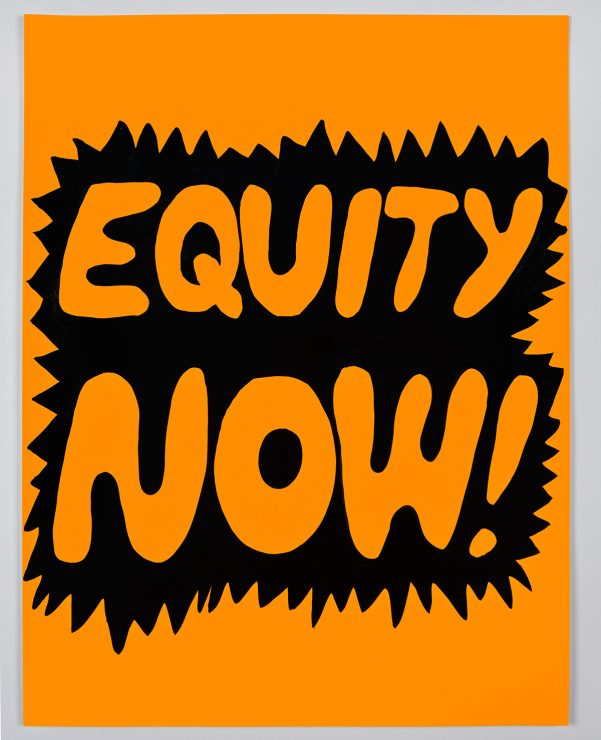