The ANOVA sometimes referred to as the F test (named after the statistician Sir Roland Fisher, the author of this test) is a set of procedures for testing the significance of differences among more than two independent means. This procedure determines the extent to which there are significant differences between the means of three or more samples with a single level of significance. Because this procedure and others like it focus on variances, they are referred to as the analysis of variance or ANOVA

One Way Analysis of Variance

The step in ANOVA can be illustrated by an example

The number of crimes committed in 4 months in various parts of a town are list below:

At 0.05 level of confidence, are crime frequencies related to urban morphology or month of the year?

First set up a null hypothesis of equality of the means Let Ho be: “There is no significant difference between the crimes frequencies and urban morphology or month of the year.

Next, find the total of the four areas as listed below then their means

Next, calculate the Grand mean

Next, calculate the sum of squares for each population. Note that in ANOVA the number of samples do not have to be same

Table 4.1.1: Means and sums of squares of crimes committed

In ANOVA, we determine differences between means by calculating their variability. Three types of variability are estimated:

Next, calculate the sums of the sum of squares for each column (i.e Variable):

Calculate the within group sum of square. MSW = SSW

Similarly, the mean s square between will be 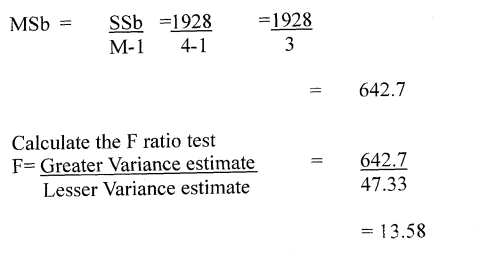 Now set up an ANOVA table:

The degrees of freedom, V are:

Since the calculated F of 13.58 is greater (>) 3.49, Ho is rejected. Therefore, “There is a significant difference between crime frequencies with regards to urban morphology or month of the year.

The most powerful test for the comparison of sample means is the student ‘t’ test. It is a parametric test and is used to determine whether or not the differences between two sample means are sufficiently great as to justify a conclusion that the means of their populations also differ significantly. It is also used for small samples

The student ‘t’ is expressed as:

Where X1 and X2 are the means of the two sets of data; S1 and S2 their standard deviations; and N1 and N2 the number of observations.

The degree of freedom, V is expressed as follows:

There is often confusion among students about the concept of “degree of freedom”. Basically, if the sum of a set of elements and the sum of all but one is of its elements are both known, then the value of the last element must also be known, i.e. it is not, unlike the others, free to vary (Ayandike, 2009). For example, if the sum of 8 elements is 30 and the values of 7 of the elements variously add up to 28, then the value ofthe final (i.e. the 8”) element must be (30-28) = 2, i.e. if is not free to adopt any other value. The degree of freedom in this case is thus (8-1) = 7, i.e. in the set of 8 element, 7 of them are free to take on any values to sum up to 28, leaving value inviolate

The matrix is a rectangular array of number arranged in rows n and columns, m i.e

Each of the numbers is called an elements. The position of each element is determined by its position in the row as well as in the

The size of the matrix is given by the number of rows (n) and number of column (m) for example.

example of column vector is

Matrix can be added, subtracted, multiplied and inverted but cannot be divided. However, they can only be divided by a scalar (i.e an ordinary number).

Matrices to be added must be of the same size as one another. That is they must have the same number of columns and row s. This is because each element of one matrix must be added to the same element of the other matrix e.g. supposing we are adding two matrix [A] ± [B]

i.e you add element by element

N.B:The number of columns and rows must be the same before it can be added

The same rule as addition is applied e.g to subtract [BI from [A]

There are two aspect of matrix multiplication namely:

a.Multiplication of matrix by a scaler

b.Multiplication of matrix by two matrices

Supposing we are multiplying the matrix below by 4

The result will have as many rows as the first and as may columns as the second. Multiplication of a matrix by vector, example

An identity or unity matrix 1, is a matrix where the diagonal consist of l’s and the rest of the elements are zero e.g.:

In matrix, algebra function of division is changed to that of inversion. The inverse of the matrix is it’s reciprocal i.e.

Only square matrices have inverses. A matrix that cannot be inverted is called a singular matrix. Several methods exists for finding the inverse of a matrix. They includes 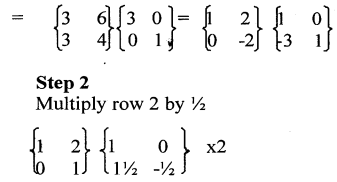 This is the more modern one. A determinant is a single number extracted from a square matrix by series of operations. It is represented by either det A or /A/

The process of obtaining a determinant from a matrix is called evaluating the determinant. Using determinant, the inverse of matrix [A] becomes 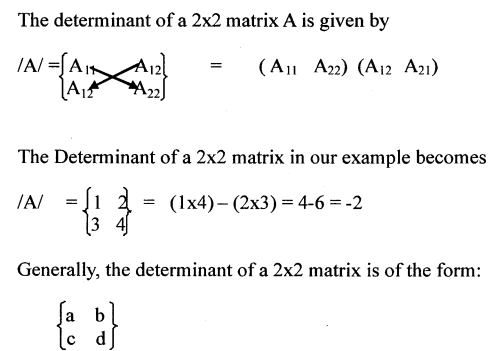 The adjoint of a matrix is the transposed matrix of co -factors with the signs taken into consideration. The signs are alternating +, -, across and down the element of the matrix e.g. in a 2×2 matrix

So far a 2×2 matrix, the inverse is the adjoint of that matrix over the determinant of the matrix. 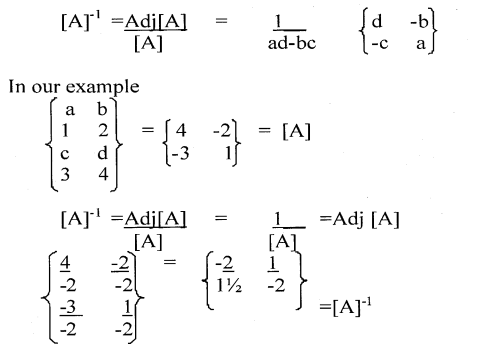 The determinant of a 3×3 matrix

The minus for each leading element becomes 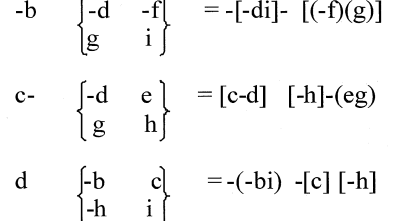 The Solution of Simultaneous Equation

The major interest in matrices (and its greatest strength) is their use in the resolution of the unknowns in simultaneous equations (Anya dike, 2009)

1.Using the classical method, our equation in matrix form is [A] [x] [B]

The matrix of the unknown

Since our matrix of unknown is 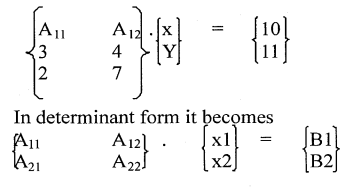 This 13 is called the common denominator. Then we find the numerator of x, which is the determinant of the main matrix.