National statistics about crime in England and Wales have been collected and published by the Home Office since 1805 (Clarke, 2006). Originally, the statistics only included proceedings and convictions data from the courts. However, in 1857, data about crimes reported to and recorded by the police were also introduced in to the statistics, with the introduction of the latter, the government seized the opportunity and could “exercise oversight over what was then a highly localised policing structure accountable at the local political level” (Clarke, 2006, p. 7), meaning that the government could watch over the statistics produced by the police when it came to politics. This essay is going to look at the figures for Rape from these statistics provided, and comment and discuss the trend of rape over the last 120 years, and will also look at the origin and location of these statistics and how they have changed and the impact the changes have had on rape.

There are many different definitions to the word ‘Rape’ in the English language. But overall it is not all that hard to define because most of the definitions broadly have the same concept of what rape is. One definition of ‘Rape’, comes from Randy Thornhill and Craig Palmer, who define rape as: “copulation resisted to the best of the victim’s ability unless such resistance would probably result in death or serious injury to the victim or in death or injury to individuals the victim commonly protects” (Thornhill & Palmer, 2000, p. 1). However, they do also acknowledge that other sexual assaults such as “oral or anal penetration of a man or a woman under the same conditions”, can also be classed as rape (Thornhill & Palmer, 2000, p. 1). Another definition of rape comes from Merriam-Webster, which defines ‘Rape’ as: “unlawful sexual activity and usually sexual intercourse carried out forcibly or under threat of injury against the will usually of a female or with a person who is beneath a certain age or incapable of valid consent because of mental illness, mental deficiency, intoxication, unconsciousness, or deception” (Merriam-Webster, 2017, p. 1). However, the main legal definition comes from government legislation website, by The National Archive, under the Sexual Offences Act 2003 which defines ‘Rape’ as:

(2) Whether a belief is reasonable is to be determined having regard to all the circumstances, including any steps A has taken to ascertain whether B consents.

(4) A person guilty of an offence under this section is liable, on conviction on indictment, to imprisonment for life.” (Sexual Offences Act, 2003, p. 1). In addition to this, the Sexual Offences Act 2003 also has definitions of rape for rape offences committed against children under the age of 16 and even younger children, who are under the age of 13. The definition for rape or other sexual activity of a child under 16 is as follows:

“The elements of the offence are:

Finally, the Rape of a child under 13 is defined as:

(2) A person guilty of an offence under this section is liable, on conviction on indictment, to imprisonment for life.” (Sexual Offences Act, 2003, p. 1).

Now that the definition of rape has been outlined, we can now move on to look at the trend of rape over the last 120 years and how it has changed over time and the reasons for it. If we look at the graph for Rape over the last 120 years, we can see that there has been a huge increase in the amount of rape that has taken place compared to the amount of Criminal Damage that has occurred. 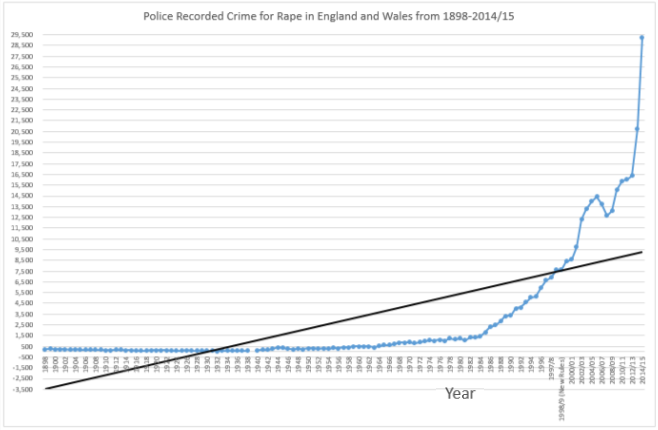 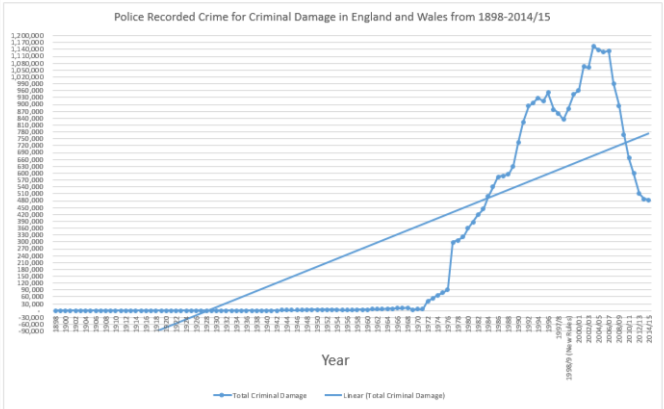 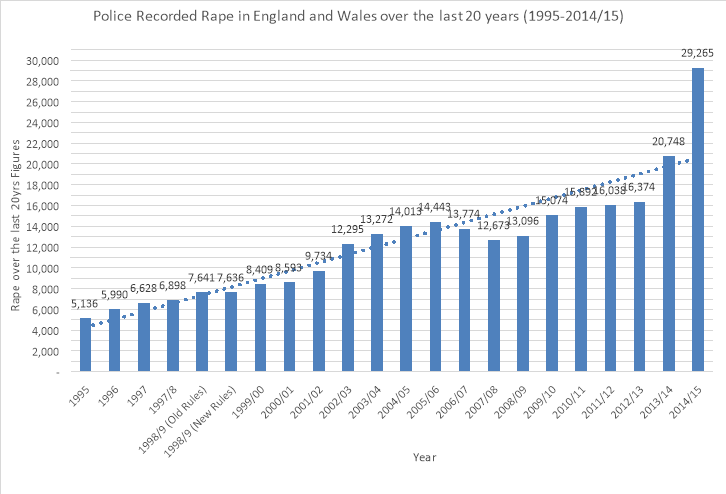 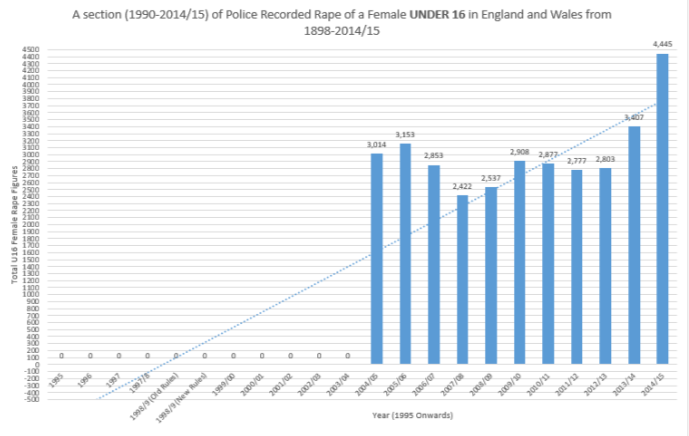 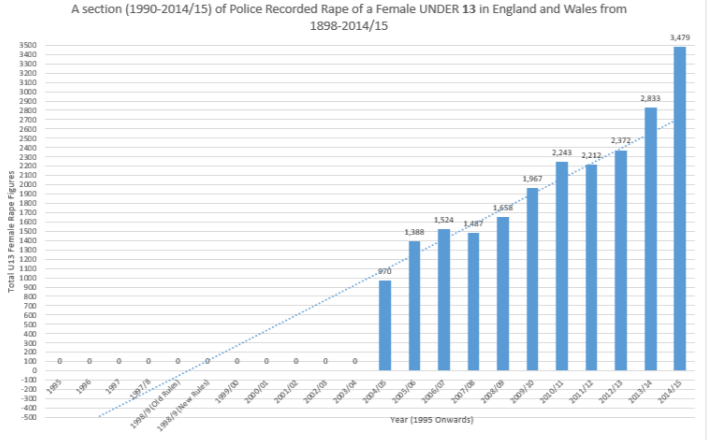 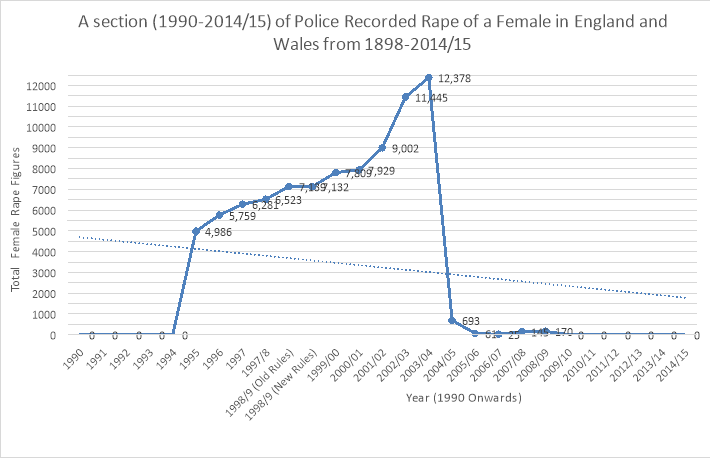 Further to this, the rape of a female in general wasn’t even recorded by the police in these statistics until 1995 as can be seen in the graph below. A reason for this can be because before 1991, it was legal for a husband to rape his wife. This was suggested by Sir Matthew Hale, in Historia Placitorum Coronea, who stated that “the husband cannot be guilty of a rape committed by himself upon his lawful wife, for by their mutual matrimonial consent and contract the wife hath given herself up to her husband, consent which she cannot retract” (Hale, 1736, p. 629).

However, after this case, that rule was abolished by the judge hence making marital rape illegal. Despite this, female rape wasn’t recorded pre-1995 because it wasn’t until 1994 when S.1 of the Sexual Offences Act 1956 was substituted by S.142 of the Criminal Justice and Public Order Act 1994 to include marital rape, and so added the following to the definition of rape:

“(3) A man also commits rape if he induces a married woman to have sexual intercourse with him by impersonating her husband.
(4) Subsection (2) applies for the purposes of any enactment.” (Criminal Justice and Public Order Act, 1994, p. 1). After this law was introduced, female rape started to be recorded by the police.

Furthermore, two feminist researchers, Jalna Hanmer and Sheila Saunders, found that the encounters that women faced by men everyday were not revealed in the Crime Survey for England and Wales (CSEW) because the CSEW is not designed to disclose information of that kind of nature. This suggests that rapes which may have occurred prior to 1995 were only reported to the police in the last decade. This may have been because of the changing in the social construction of the police, meaning that there are more female officers now than there used to be, which makes rape victims more likely and willing to talk to instead of male officers. In addition to this, society has also changed to provide more victim support for rape victims by establishing rape centres for victims (Hanmer & Saunders, 1984).

However, having said this, we are looking at police recorded crime statistics. These statistics are not exactly accurate because there are some rapes or crimes not recorded by the police at all. This is because we are looking statistics from the Crime Survey for England Wales. According to a Crime Statistics 2006 report, by the then Home Secretary of State Charles Clarke, even though there is a lengthy history of reported and recorded crime statistics, that were used to “judge police performance”, the statistics, for a while now, have been documented as “having a number of weaknesses” (Clarke, 2006, p. 7). He went on to outline three main weaknesses in the statistics from the CSEW. He stated: “First, there have been regular claims that the police adjust their crime statistics to improve measured reported performance” (Clarke, 2006, p. 7), meaning that the statistics recorded by the police are not exactly, as they have been adjusted so that the police look more credible and it looks as though they have high performance. “Second, the processes and categories used by local police to record crime have historically had a significant degree of local variability; this has made it difficult both to make comparisons among local forces and to form aggregates to provide a meaningful national picture” (Clarke, 2006, p. 7). This suggests that the categories that police use to categorise the crimes, are only clear to the local police who have created these statistics, as the statistics are mainly based on the crime in their area, which makes things very ambiguous in the grand scheme of things, when a bigger picture of crime rates in England and Wales. “Third, the picture that emerges from recorded crime is potentially distorted by the unknown and uncontrollable variability in the public’s reporting of crime to the police” (Clarke, 2006, p. 7). This weakness proposes that when the crimes are recorded, the statistics are not entirely accurate because it is not possible to distinguish how many people from the public reported a crime, and how many of the statistics have been adjusted by the police like the first weakness. However, the then home secretary did state that whilst the problems we have remain, there have been several attempts made over the years to address these perceived problems that are there in the Crime Survey for England Wales.

These weaknesses are a big factor in the statistics we have for rape, as they came from the CSEW. As the weaknesses mentioned in the report exist, our statistics for rape may not be entirely accurate. This leads us to believe that there may have been more rapes reported by the public but not recorded by the police, and of those that were recorded, only a few maybe accurate as the others may have been adjusted to make the police look more efficient. A further problem this creates for the statistics we have is that, like the second weakness mentioned above, some rape statistics may not have been recorded in the survey by the police as they may not have fell into any of the categories that the police were using to define rape. This could possibly have had a major impact on the statistics we have, hence, impacting the graphs that have been used above to illustrate the trend of rape.