The Global and Nationwide Disputes of Police Brutality

The United States police force kills more people of all races and ethnicities in days than other countries do in years. In less than a month, the U.S. had more deaths due to police shootings than England had in two decades. While citizens experience the great toll that these deaths cause all across America, to other countries, police brutality is a minor problem. While the crime rate in the U.S. is significantly higher than other countries, police shootings add to the death count of not only white Americans but especially of African Americans.

Statistics show that a more violent country leads to a more violent police force. The Economist wrote an article about killer cops in other countries. In it, it was stated that unlike the United States, where “killer” officers are widely disputed, in more violent countries, they are celebrated. These countries are normally much poorer than the United States and have different governmental systems along with a higher crime rate. Countries like Brazil, Nigeria, and the Philippines are a few examples. In the Philippines, President Duterte actually urges his offices to kill suspected drug dealers and users. In these countries, the government insists that killing criminals will lower the crime rate, but many believe that it only encourages it.[2] Everywhere the amount of people being shot yearly, even monthly, has become an overwhelming problem–such a big problem that thirteen of the 100 biggest city police departments kill black men at higher rates than the U.S. murder rate.[3] 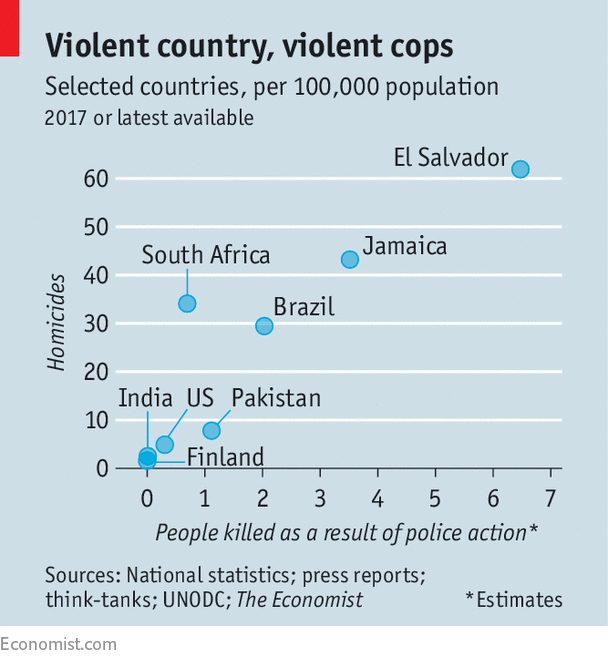 The U.S. is very unique in that it is a wealthy country, but has many more police shootings yearly than any of the other countries similar to it in wealth. The most problematic aspect although, is the amount of African Americans that police kill compared to white Americans. According to Mapping Police Violence, black people are 3 times more likely to be shot by a policeman than a white person is.[4] In an article titled, “In Some Countries, Killer Cops are Celebrated” from The Economist it’s written that “American cops shoot more people than police in other wealthier countries largely because more people shoot at them. Officers in the US are 36 times deadlier than German police officers but are also 35 times likelier to be killed on the job.”[5]  While this may be true, it still doesn’t justify or explain police officers shooting more black men than white. 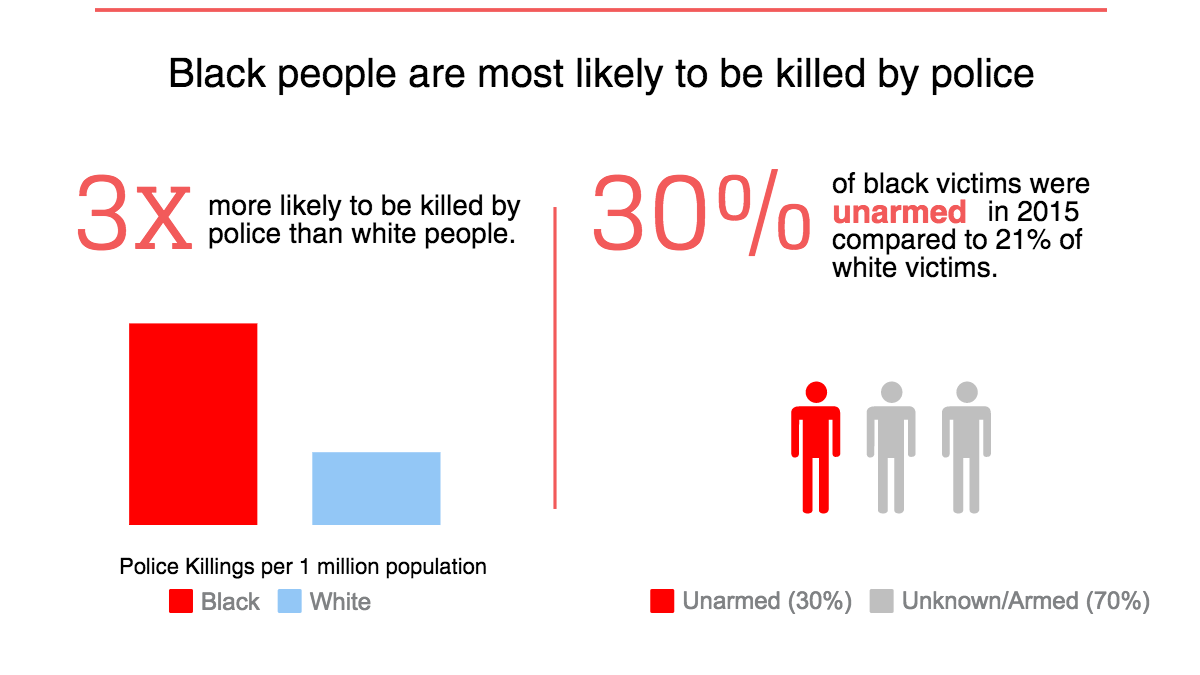 Police shooting armed victims can be justified, but the amount of unarmed black people being killed is too much. Through hundreds of examples, it leads to showing that police brutality stems from racism. 30% of black victims are unarmed compared to the 21% of white victims. The United States leads in numbers of fatalities caused by policemen and especially leads in fatalities of African Americans due to shootings by officers. As an African American living in the United States, they are scared. They must take into account many more things than the average white person may have too. In particular, their location matters. Some states’ police are much more likely to shoot at a victim than others. For example, in Oklahoma, black people are seven times more likely to be shot by a policeman than in Georgia. [6] 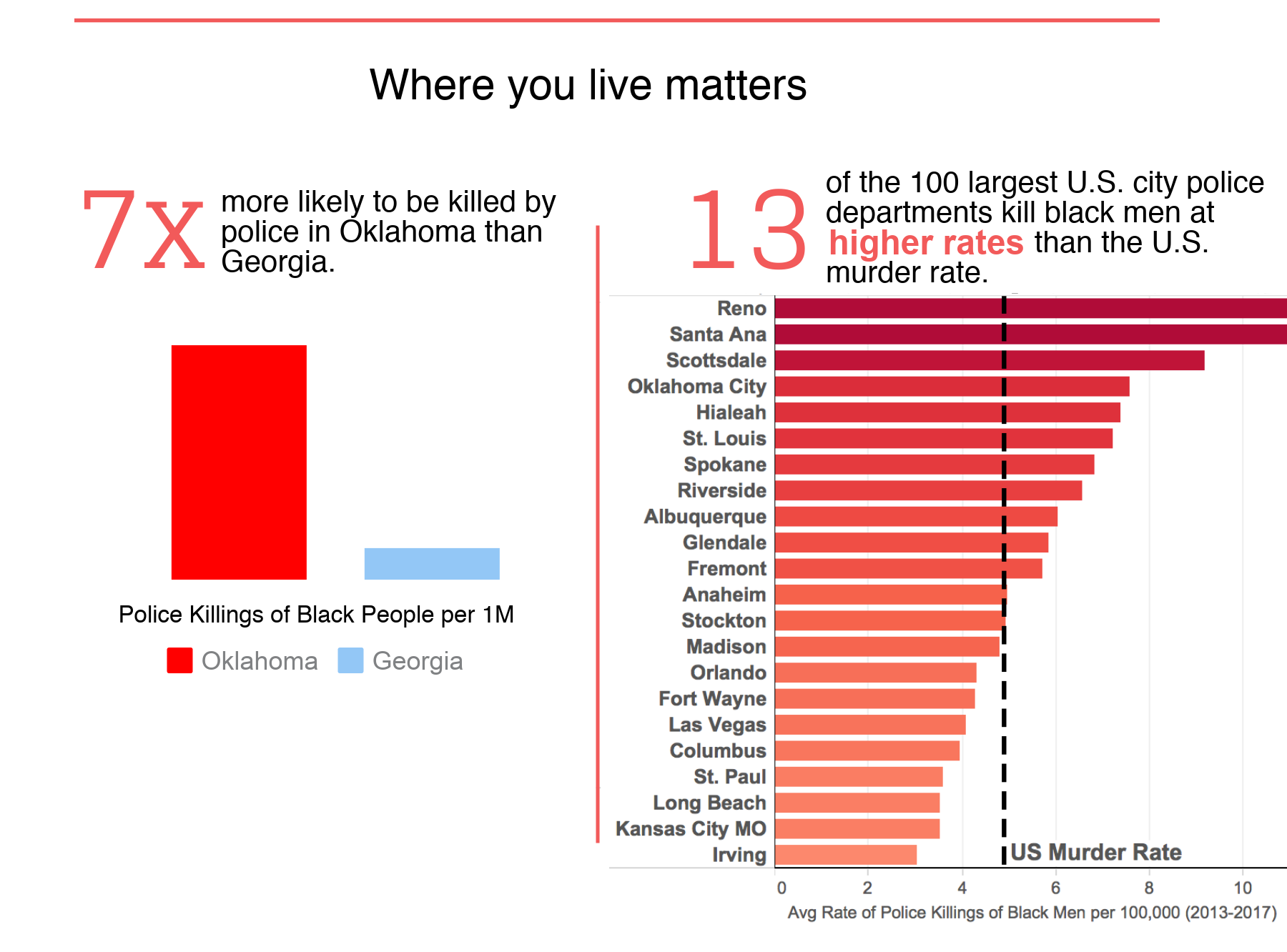 African Americans take up 13% of the overall U.S. population, while Hispanics are 17% and white people are 63%. The number of black people killed by police is extremely disproportionate to their population. 31% of people killed by police are African American. Even more, 39% of people killed who weren’t attacking are black.  Unarmed victims tend to be the minority of police shootings. Since white people are the majority of the population, it leaves African Americans and Hispanics to the minority. 35% of unarmed victims killed are white, while the whopping 65% of unarmed victims are of the minority. According to German Lopez from Vox, “Some of these disparities are explained by socioeconomic factors — such as poverty, unemployment, segregation, and neglect by the police when it comes to serious crimes — that lead to more crime and violence in black communities. As a result, police tend to be more present in black neighborhoods — and therefore may be more likely to take policing actions, from traffic stops to arrests to shootings, in these areas.” [7] 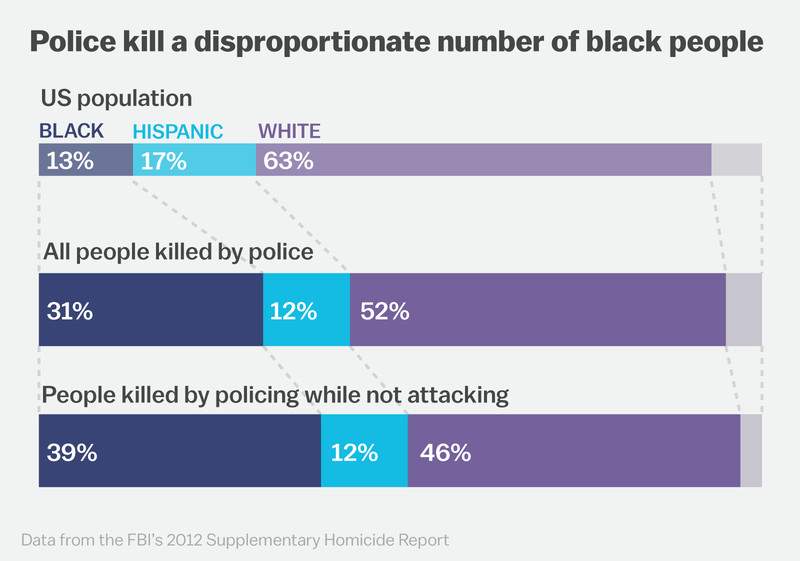 Officers should be held accountable for their actions especially when it comes to killing victims, but often they are not. 99% of shootings in 2015, the officer wasn’t convicted or even charged. This means, after killing someone, the officer was let go free of charge and no consequence. If 30% of black victims alone were unarmed, then there should be a higher percentage of police being convicted of killing a victim. Out of 481 policemen, 12 were charged and only 4 of them were convicted.[8] If laws and protocols were changed or there was simply more accountability for killing one of their victims, fatalities may significantly decrease. 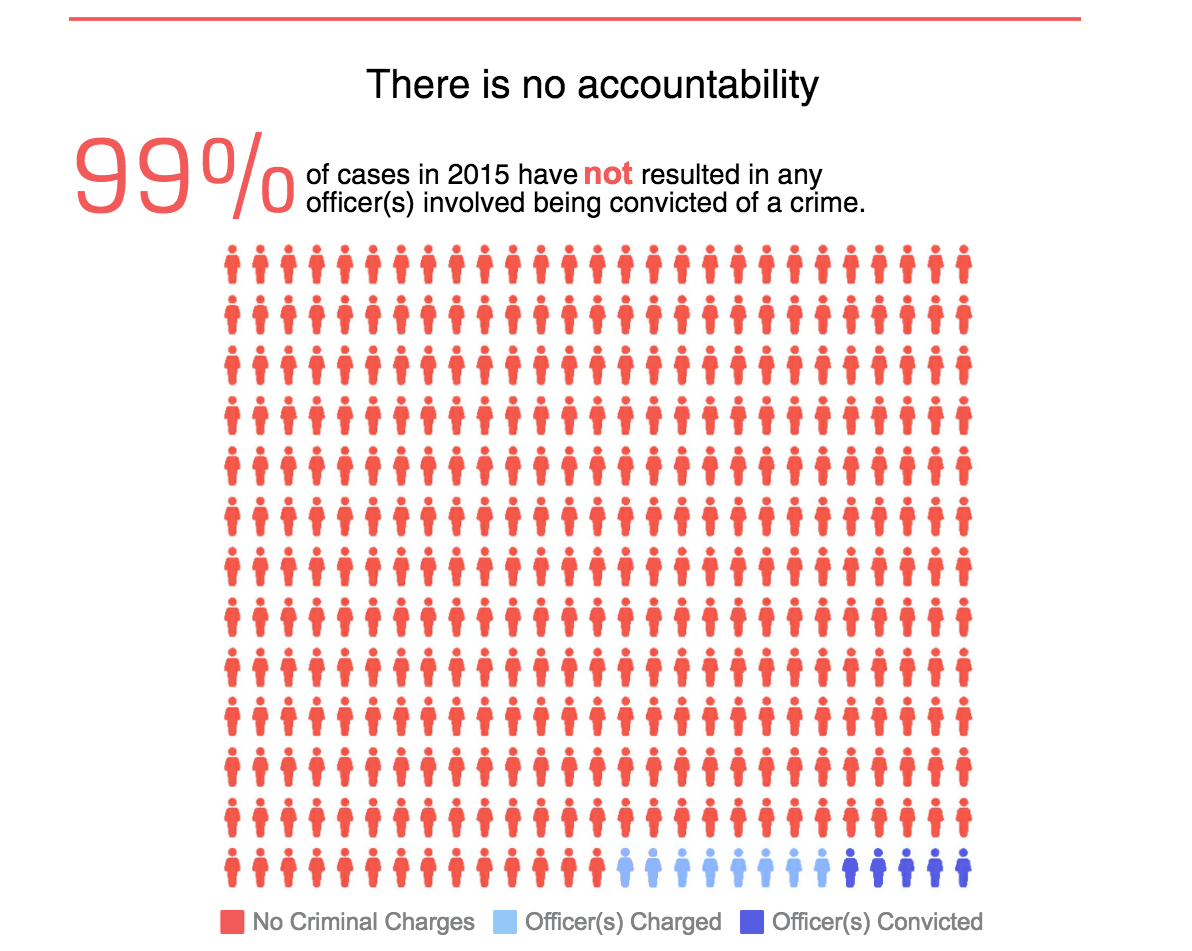 There are more solutions for police brutality too. Although police brutality is based solely on racism, there are ways that the U.S. police force could lower their numbers of victims, armed and unarmed, shot by their policemen. Some have already been tested and the results have been very positive. For example, the two most successful means of police killing fewer people while on duty include requiring the officer to use any and all other means before shooting. This would be like warning the victim before shooting. There have been 25% fewer killings from this solution. The other most successful solution is requiring all use of force to be reported.[9] These types of alternatives include pepper spray and tasers. Both items are just as easily accessible as a gun would be on an officer’s belt. Reaching for a gun shouldn’t be an officer’s first defense. Sara Miller Llana believes it all begins with the department’s training. Germany goes through meticulous training and therefore have fewer fatalities due to police shootings. Llana suggests improvements in the education requirements, training intensity, and its duration would be the best to start with.[10]
It’s simple to see that police brutality is a much bigger problem for the United States than for any other country. Even in countries with high fatalities due to police shootings, they are not based on race. It is a complex problem with simple solutions. 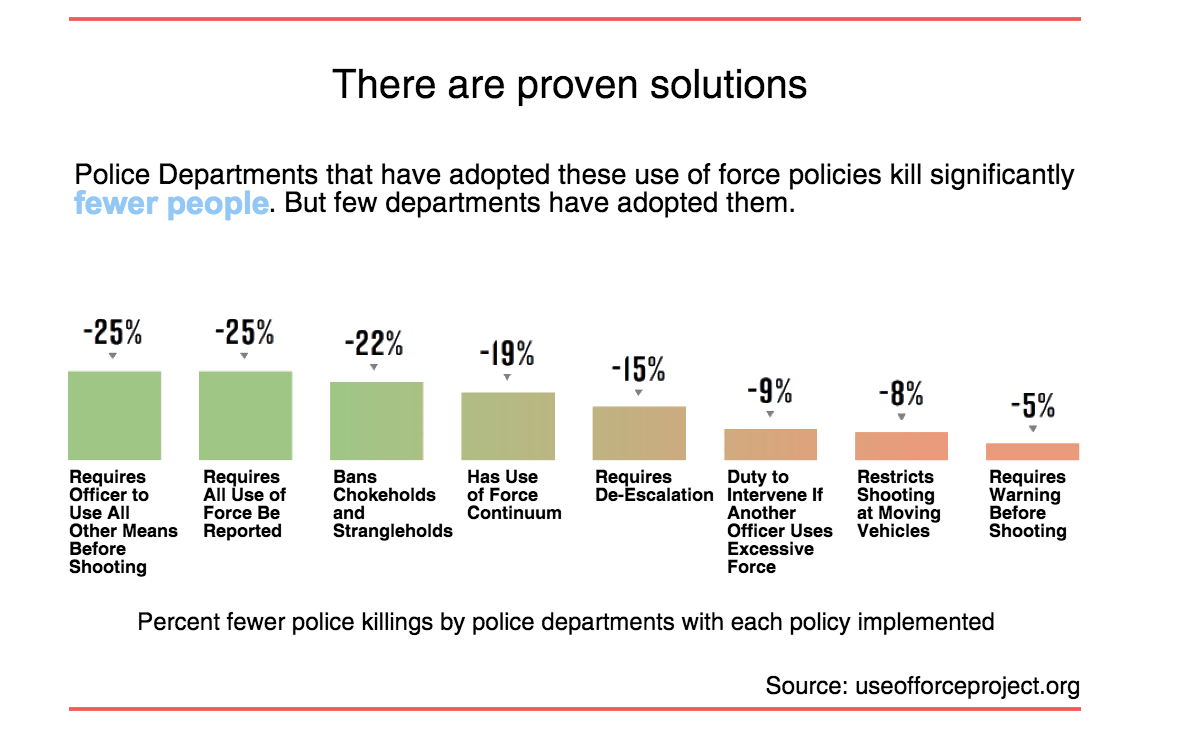 [2] Lartey, Jamiles. “By the Numbers: US Police Kill More in Days than Other Countries Do in Years.” The Guardian, Guardian News and Media, 9 June 2015, www.theguardian.com/us-news/2015/jun/09/the-counted-police-killings-us

[5] “In Some Countries, Killer Cops Are Celebrated.” The Economist, The Economist Newspaper, 8 Mar. 2018, www.economist.com/international/2018/03/08/in-some-countries-killer-cops-are-celebrated.