“Intimate partner violence is a pattern of purposeful coercive behaviours that may include inflicted physical injury, psychological abuse, sexual assault, progressive social isolation, stalking, deprivation, intimidation and threats. These behaviours are perpetrated by someone who is, was or wishes to be involved in an intimate or dating relationship with an adult or adolescent victim and are aimed at establishing control of one partner over the other”

”Domestic violence, also known as domestic abuse, spousal abuse, battering, family violence, and intimate partner violence, is defined as a pattern of abusive behaviors by one partner against another in an intimate relationship such as marriage, dating, family, or cohabitation” (Shipway, 2004).

The domestic violence is: “the inflicting of physical injury by one family or household member on another; also: a repeated / habitual pattern of such behavior” (Meriem Webster, 2011)

“There is acknowledgment that many victims are not actually married to the abuser, but rather cohabiting or in other arrangements” (Waits and Kathleen, 1985).

“Domestic violence is an abuse of power. It is the domination, coercion, intimidation and victimization of one person by another by physical, sexual or emotional means within intimate relationships” (Kelsey, et al. 2000).

The behavior of sons and in-laws towards the violence is essential to note that women are beaten by their sons, parents and in-laws (Iqbal, 1990).

World Health Organization in 2005 conducted a multi-country study on domestic violence which showed that 15% women faced physical violence whereas 71% faced sexual violence by their inmate partners. Among the countries 20% and 75% of women had been victim of emotional abuse for last one year (Garcia, et al. 2006).

The young women are often taken from Bangladesh, Thailand in order to serve as domestic servants in the homes of wealthy people. They are desecrated, demoralized and battered physically and sexually (Collective, 1990).

Majlis-e-Khawateen is fundamentalist women group established by government to oblige the women and women rights (Mumtaz and Shaheed, 1987).

The South-East Asia region is known for patriarchal tradition. The women face social, economic and cultural deterrents. There are certain traditions and norms, which are followed and the law enforcement agencies cannot influence to combat the violence. On the other hand, these agencies are also found involved in rape, acid attacks, and other forms of abuses. For past few decades the women materialized globally against the domestic violence and made their efforts to contribute and condensed the male dominance at home and in the country (Khan, et al. 1990).

The women from all social classes, races, ethnicities, religious groups, developed and developing countries and of any age have been victim of violence. It is obvious that violence is generally described in family of domestic realm. The term domestic means violence by inmate partner and by family members. It is mostly revealed as physical, sexual, psychological and emotional. The domestic violence in developing and developed countries generally ranges from 15-17 percent (WHO, 2005).

Domestic violence or battering women, maltreated utterly either physically or psychologically twice by a husband for having subtle relations. If the above definition is assumed for domestic violence then all wives do face abuses at some stages after marriage. Later abused women were described as “subjected to intense criticism, put downs, verbal harassment, sexual coercion and assault, physical attacks and intimidation, restrain of normal activities, freedom and denial of access to resources” (Walker, 1985).

Violence include forced marriages, rape and domestic violence which are serious problems faced by a women. The physical and psychological abuses reported by over 85% women in Pakistan. The honor killing cases are also at large and Human Right Commission of Pakistan reported in 2008 that 1019 women have been victim of honor killing and in 2005, 10,000 lives were lost.[1]

The status of women contrasts in all walks of life and in demography as well. It has diverse arrays of norms and traditions and their sways. The women working as pilots whereas some still buried alive in tribal areas in the patriarchal society. On other hand women are used as a sex object by media and portrayal on billboards can be seen universally. The women in some parts of Pakistan are restituted for their basic rights. They are not provided identical opportunities for what they deserve. The World Economic Forum placed Pakistan at 56 among the 58 countries which show the highest gender gap among the countries. The extremism has been considered a hindrance in the women development.[2]

The states sign a treaty with international human rights as an obligation to gauge the domestic violence and to take measures to control it. It is found as a duty in American deceleration on the rights and duties of man. The UN committee on elimination of racial discrimination endorse that the domestic violence is human rights violation and states are obliged to protect and provide access to justice for victims without any discrimination and additional barriers (Libal & Parekh, 2009).

In developed and developing countries, domestic violence has been a public health issue and has considerable importance (Watts and Zimmerman, 2002, Heise, Raikes, Watts, et al. 1994, WHO, 1997, Kapoor, 2000).

In Bradford UK, a study was conducted among Muslim men and women and it was concluded that men use Islam as a source of domestic violence whereas women use Islam as a ladder to gain strength and a way of negotiation for the taboos extended by partners (Macey, 1999).

Domestic violence reveals at all levels of society and has varying forms. Recently, it became the concerning area bringing awareness of its commonness and impacts. It ranges from covert to overt acts (Hassan, 1995).

In stereotypical society, where wife is considered as sole property of better half and justified it as a private and internal issue of family. This behavior is critical and the wives need endowment of a remedial law. For this in every Tehsil or sub district, government appoints a protection committee of police officers and two women counselors along with a protection officer to hear the aggrieved cases and provide the necessary protection (Rukhsana, 2009).

In societies, the main cause which is considered to be a source of domestic violence is the present social structure, women are physically violated by men and men do justify violence against women where the women ultimately give in. Violence is not a common thing to explain (Gelles, 1979).

Violence depends upon the man’s education, if there is lower level of education then there will be violence and men justify physical violence to their spouses (Haj, 1998).

The women are considered the weaker section of the society and also poorer in status as to men and have been a victim of violence due to that position. The women do perceive themselves insecure due to violence by an inmate partner. When a person is violated physically and has a sense of insecurity then it has adverse emotional effects on their personalities. The women who leave marriages are taunted by families and societies for being a burden. The women lose their children and there is nothing reciprocal which eventually becomes social stigma. The women are not helped by police and the institutions as well. The dilemma of battered women is considered by police as confidential in case of marital abuse where the counselor advice to be a conventional wife (Hassan, 1995).

There is astonishing statistics; the actual level of the issue is undermined by the researchers and experts. All the cases are not conveyed to law enforcement agencies and most of the cases are repressed. The studies are often based on police reports and police manipulates the actual facts and level of violence (Durose, 2005).

All Muslim societies are critiqued for human rights violation and also for women rights. There are many reports on domestic violence in Pakistani media but the two published studies describe that 150 women were asked about health care facilities in Karachi, 34% of women faced physical abuse and it shows association with domestic violence whereas 43% of male respondents justified the violence when a wife used contraceptive without her husband’s consent (Bawah, et al. 1999).

A person who is abused by her partner is called a victim. A battered wife with typical personality is restraint, nervous with low self-confidence. The women mostly come from restricted and conventional environment where men and women are traditional and victimized (Niaz, 1995).

Human Rights Watch reports in “Crime and Custom” that domestic violence is not a casual it is rather structural. It is stated that structure of family has some doings, motions and phenomenon which are the causes of domestic violence usually. This hallucination of structure is conceptualized by the society that rejects the discrimination of male and female and brings them to the equal level of the social ladder. It can be operationalized as soon as possible with the vigorous input of the NGO’s, government departments and civil society. Now, the time is to concentrate on this issue to protect the upcoming generation in Pakistan (Khan, n.d).

WHO in 2005 conducted a multi-country study and concluded the high ratio of abuse. The violence against women by partner has been a main cause in health concerns. Women are at greater risk at home than anywhere else (Garcia, et al. 2005).

Varying forms of violence exist in our county. Women are snubbed, disregarded and even found intolerable by a large section of society (Report of the Commission of Inquiry for Women: Pakistan, 1997).

Domestic violence is one of the most pervasive human rights violations across the globe. Estimates are that one-third of the world’s women will endure an abusive relationship (UN Commission on the Status of Women, 2000).

Abusive relationships formed by many factors which cover the battering phenomenon. The status of women became inferior when mistrust develops in environs. Domestic violence can be a result of stress and strains of family. The abuser and victim can have some features which give rise to abusive relationships (Mintz, et al. 1997).

The variables are as given below:

The independent variables are categorized into physical and psychological to analyze the severity of the domestic violence as given below: 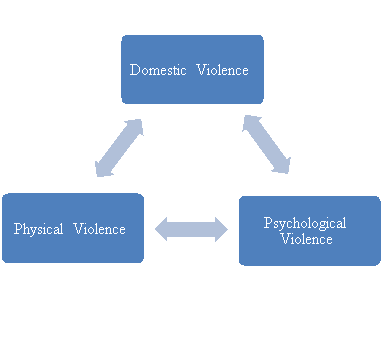 The above mentioned variables are analyzed to find out the severity of the domestic violence in the urban and rural areas of Muzaffarabad.

Rational of the Study

The domestic violence is known as inmate partner violence and forcible behaviors that may include abuses, imposing behavior, the physical injuries, psychological abuse, sexual assault, social exclusion, depravation and threats. The use of power by inmate partners to their spouses. The patriarchal trends prevalent in the society justify the violence.

The purpose of this study is to know the extent of domestic violence, its forms, causes and Severity Index Model is used to know the level of physical and psychological violence prevalent in the society. This research work is helpful for Government organizations, NGO’s, researchers and students to formulate the policies, conduct further research and initiate the programs regarding the mitigation of domestic violence.