Inmates in America often face barriers from prison to successful reentry back into the community. They are often released with a bus ticket and a minimal amount of gate money. They reenter back into the community with no health insurance, no guidance with employment, and no financial resource for housing. In 1999, approximately 33 percent of state prison releases were drug offenders, 25 percent were violent offenders, and 31 percent were property offenders (Hughes & Wilson, 2017).

There are approximately 13 million people admitted to and released from jail (Solomon, 2012). In 2007, more than 725,000 inmates were released from state and federal prisons in the United States (Baillargeon, et. al, 2010). By the end of 2010, the United States federal and state prison facilities held over 1.6 million prisoners. Approximately 95 percent of all state prisoners will eventually be released from prison, and an estimated 80 percent will be released on parole supervision (Hughes & Wilson, 2017). There are approximately 730,000 inmates that are released on a yearly basis (Mears & Mestre, 2012).

A study that looked at recidivism in over 40 states concluded that more than four out of 10 offenders will return to state prison within three years of their release (Justice Center The Council of State Governments, 2017).There were 23 percent of adults exiting parole in 2010 which:

The two most common barriers that inmates in America face are securing employment and housing (Gideon & Sung, 2011). Ex-offenders are having a difficult time with finding employment after being released from prison, which is a huge barrier to successfully transitioning back into the community. Ex-offenders who are able to find jobs are normally referred by their family or friends. The programs that are successful with helping ex-offenders find employment are limited in capacity and geographic reach (Gideon & Sung, 2011). The jobs that are likely to hire ex-offenders are scarce due to downsizing.

There are several barriers that ex-offenders face when trying to find employment. Those who have history of being convicted for a felony are legally prohibited from certain occupations:

However, this does vary from state-to-state. There are jobs that offenders are restricted from pursuing in which prisoners receive training for while imprisoned. A study conducted on employers in Los Angeles concluded that businesses that check criminal backgrounds are less likely to hire those with a criminal record. Thus, background checks hinder ex-offenders chances of securing employment.

There was a three-state sample that concluded 45% of the 65% of employed ex-offenders continued to be employed (Gideon & Sung, 2011). A new study concluded that an estimated one-third of American adults were arrested by the time they were 23 years old (Solomon, 2012). Criminal records keep many people from finding a job even though they have paid their dues, are qualified for the job, and are less likely to reoffend.

Regardless of the type of crime committed, a criminal record will hinder an ex-offender’s chances of finding employment. Amongst 75 largest counties, there were an estimated one-third of felony arrests that did not lead to conviction. Yet, the arrest still shows on the criminal background, which affects the chances of them getting a job. Most arrests are for minor or nonviolent offenses. In 2009, only four percent of 14 million arrests consisted of violent crimes, including murder, rape, robbery, and aggravated assault (Solomon, 2012). 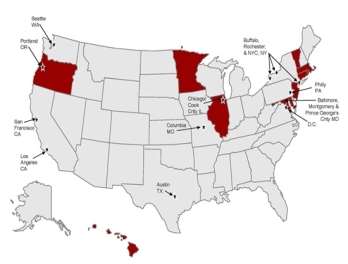 The number of governmental entities and advocates increased, and they support removing the box on employment application to help ex-offenders stand a higher chance of being employed.

Ban the Box law will impose restrictions on what employers can inquire based on criminal history by limiting:

Hawaii was the first state to adopt a fair-chance law, which applied to public and private employment (excluding the federal government) in 1998 (Bergen & Bressler, 2016). Such statute restricts an employer from inquiring about an applicant’s history of conviction prior to being hired. There are other states that established statewide or local laws of Ban the Box, including: California, Oregon, New York, Texas, Washington, and Washington D.C. (Hire Image Background Screening Specialist, 2017). New York City adopted a Fair Chance Act, which makes it illegal for employers to inquire about a criminal record of potential applicants prior to making a job offer (NYC, 2016).

Housing is another common barrier that ex-offenders face when released back into the community. Ex-offenders find it difficult to find temporary housing on their own and lack funds to rent a place of their own. Thus, the majority tends to live with their family members once released from prison. An Urban Institute study concluded that an estimated three quarters of those released in Chicago planned to live with family (Gideon & Sung, 2011).

Housing is a significant barrier as landlords will deny ex-offenders tenancy due to their criminal record, and are unable to afford market rent or provide a security deposit. This is the reason why approximately 10 to 50% of parolees become homeless (Gideon & Sung, 2011). Although there are other housing resources that ex-offenders could resort to, they have a limited capacity.

There are also limitations on ex-offenders who were convicted of sex crimes. The Megan’s Law requires sex offenders to register and is supported by 47 states, which makes offenders ineligible for public housing. There are 31 states that have laws similar to Jessica’s Law, which limits convicted sex offenders (Gideon & Sung, 2011). This includes restricting where sex offenders can live, and are required to distance themselves from schools or parks.

Prison fellowship is a reentry program available to ex-offenders. It is a Christian-based program that aims at giving hope, healing, and a new purpose for life to each ex-offender because they believe that the most broken situations can be made whole again (Prison Fellowship, 2017). This program also provides advice and guidance on how to overcome barriers, including: housing, employment, and finances. It is beneficial to ex-offenders as they will be provided with advice on the necessary resources that they need to successfully transition back into the community.

Ex-offenders who have felony drug convictions deal with legal limitations. The Personal Responsibility and Work Opportunity and Reconciliation Act of 1996 bans those convicted for a felony drug charge for a lifetime. Meaning, these offenders are unable to receive Temporary Assistance for Needy Families (TANF) and food stamps (Gideon & Sung). This tends to be a barrier that some ex-offenders face when released because it reduces their income. Also, drug offenders who intended on going back to school are unable to take out a student loan (Gideon & Sung, 2011).

Cognitive-behavioral therapy (CBT) consists of various treatment interventions. CBT can help with changing people’s feelings, including their values (Gideon & Sung, 2011). This type of approach helps offenders with gaining self-control and responsibility toward others and the community. There are six CBT programs that are most commonly used in correctional settings:

It is important that these barriers ex-offenders face are addressed in order for them to have a successful transition back into the community. The people of America need to be informed of these barriers so that we can help make a difference in our communities by reducing the rate of recidivism. This will allow our communities to be safeguarded from ex-offenders so long as they are able to successfully transition back into our community. Their wrongdoings and criminal activity does not only impact themselves, it also impacts their loved ones and those who are victimized. Therefore, it is important to know the statistics and studies of barriers that hinder the reintegration of ex-offenders in which we could help them successfully overcome the barriers that they may have a difficult time with.

Solomon, A. 2012. In search of a job: Criminal records as barriers to employment. Office of Justice Programs National Institute of Justice. Retrieved online from https://www.nij.gov/journals/270/Pages/criminal-records.aspx