Alzheimer’s disease (AD) is the general type of dementia that affects the elderly population globally. An accurate and early diagnosis of Alzheimer is crucial for the treatment of patients suffering from AD. In this paper, two different classifiers, SVM (Support Vector Machine) and an ANFIS (Adaptive Neuro Fuzzy Inference System) have been employed to classify patients between AD control, mild control and normal control. The system employed MRI (Magnetic Resonance Imaging) data obtained from the ADNI dataset of 150 subjects consisting of 75 normal controls, 50 mild controls and 25 AD controls. Initially, image processing techniques like segmentation and feature extraction are applied on these MRI images to enhance the classification accuracy. The segmentation is performed using k-means clustering and a GLCM (Gray Level Co-Occurrence Matrix) are used to extract the 2D features of the left ventricle of the brain. The extracted features are then utilized to train the classifiers and the results obtained from both classifiers are then compared. It is shown that the classification accuracy of ANFIS is more when compared to that of SVM classifier.

Alzheimer’s disease is a neurodegenerative syndrome [1] of the brain tissues that results in progressive and permanent loss of mental function. The disease generally starts with mild indications and ends with severe damage in brain. The pathophysiology of the disease is associated with the damage and death of the neurons, originating in the hippocampus region of the brain that is involved with learning and memory, then atrophy impacts the whole brain. According to epidemiological information Alzheimer affects approximately 26 million people all over the world. In order to give proper care to AD patients, it is vital to measure the amount of atrophy present in the cerebral cortex during the initial stages of AD.

The early detection of these diseases can greatly enhance diagnosis. But, diagnosis of this disease depends on the history, neuropsychological tests and clinical assessment. However, the clinical assessment is biased and the neuropsychological test does not provide high accuracy for early stage detection of the disease. In addition to neuropsychological analysis, structural imaging is greatly utilized in order to provide support to AD diagnosis. The whole brain approach utilized for describing the brain atrophy might be capable of differentiating between AD and MCI (mild cognitive impairment) patients.

Recent researches [1, 2] show that the analysis of brain scan images is more consistent and subtle in identifying the presence of Alzheimer’s disease than the conventional cognitive assessment. In this circumstance, several machine learning approaches have been presented in order to perform neuroimaging analysis for classification of AD. In addition, all these approaches require training sets that is well categorized structure in order to classify each new subject that belongs to the test set. Recently MRI data have become center of several machine learning techniques for classifying subjects as CN vs. AD or CN vs. MCI.

The focus of this paper is to classify between the different stages of AD utilizing machine learning techniques. Here, all the MRI brain scan images are segmented using k means clustering and the 2D shape features of the ventricles are obtained using GLCM based feature extraction. Then the extracted features are utilized for classification. First, an SVM based classifier is employed to classify the test data into three categories: normal, mild and AD. Second, an ANFIS based classifier is utilized for classification. Finally, the results of the two classifiers are compared and have been shown that ANFIS classifier outperforms SVM classifier.

Alzheimer’s disease (AD) classification is vital for early detection and diagnosis of the disease. Several studies explored machine learning techniques and artificial intelligence for detecting the cerebral changes and differentiate between normal aging and AD patients [1-3]. In [4] a support vector machine (SVM) based machine learning approach has been utilized for automatic classification entire brain anatomical MRI data to differentiate between elderly control and AD control patients. In this study, 16 patients with AD control and 22 patients with elderly control were used. Depending upon the gray matter characteristics extracted from region of interest (ROI), the SVM algorithm is used for classifying the subjects and the arithmetic procedures are based on bootstrap resampling in order to ensure the strength of the results.

In [5] a local patch based subspace ensemble approach has been proposed that constructs several different classifiers depending on the various subsets of local patches and they are combined for robust and more accurate classification. Here, every brain image is segmented into number of local patches and the subset of patches is selected from the patch pool and a sparse representation based classifier technique has been used in order to construct a weak classifier. The multiple weak classifiers are then combined for making final decision. [6] A framework for classifying Alzheimer’s disease utilizing ADNI dataset is presented. The framework fuses overlap based and registration based similarity measures that are enhanced employing a self-smoothing operator. These enhanced metrics are then employed for the classification of Alzheimer disease.

In [7] an automatic classification system for recognizing AD in MRI (structural Magnetic Resonance Imaging) has been developed. The system utilizes visual content description of anatomical brain structure (hippocampal region) and fuses two biomarkers CSF and hippocampus in order to enhance the classification accuracy. It is shown that the classification accuracy is more in case of fusion than when utilizing CSF volume or visual features separately. In [8] support vector machines (SVM) were assessed to determine whether data combined from various scanners would provide effective classification. Here, a linear SVM has been employed to classify GM (grey matter) portion of T1 weighted MR image. The results show that about 96% of clinically verified AD patients were accurately classified exploiting the entire brain image. [9] Classified between healthy, MCI and AD patients with the help of support vector machine (SVM). The author also analyzed the accuracy of classification when several anatomical brain regions and various image modalities are combined. Therefore, global and regional grey matter, regional asymmetry coefficients, Ti- quantitative MRI data and regional with matter volumes are combined. It shows that an accuracy of 88.3% in case of CTL vs. AD and 81.8 % in case of CTL vs. MCI was attained. In [10] a binary SVM has been proposed to classify patients between mild cognitive impairment and elderly control subjects from MRI images. This approach utilized a Java Agent DEvelopement Framework (JADE) in order to reduce the computation time.

In this section, the data set and methods utilized in this study as well as the description of the proposed framework depicted in fig 1 are presented.

The data employed in this study were obtained from ADNI (Alzheimer’s disease Neuroimaging Initiative) database [11]. ADNI utilizes biomarker measures and neuroimaging in order to track the changes taking places in the brain of the subjects under study for diagnosing AD at an early stage. 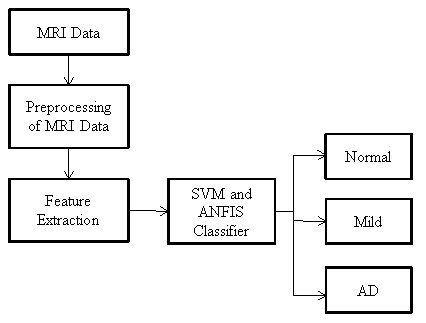 The collected T1 weighted MRI images were free from noise, missing data and outliers. In preprocessing step all the MRI brain images are segmented into VM, GM, CSF and Ventricle tissues that represent vital information about brain degeneration disease. A clustering based segmentation approach has been employed for this purpose. The k means clustering is exploited in order to extract the VM, GM and CSF features the entire MRI brain image. It partitions the data points into k clusters [12] based on the inherent distance between the data points. The intent is to minimize inter cluster variance. For a healthy MRI brain image, k is usually three (corresponding to grey matter, white matter and CSF).

In order to accurately classify AD patients ventricle shape features are extracted. In this work, the 2D shape features are extracted from the ventricles based on Gray-Level Co-occurrence Matrix (GLCM) feature extraction. This method computes the co-occurrence matrix of each image present in the database by calculating how frequently pixel x with certain intensity value take place in relation with other pixel y at a specific orientation θ and distance d.