This chapter describes the methodology and implementation of the speaker independent speech recognizer for the Sinhala language and the Android mobile application for voice dialing. Mainly there are two phases of the research. First one is to build the speaker independent Sinhala speech recognizer to recognize the digits spoken in Sinhala language. The second phase is to build an android application by integrating the trained speech recognizer. This chapter covers the tools, algorithms, theoretical aspects, the models and the file structures used for the entire research process.

In this section the development of the speaker independent Sinhala speech recognizer is described, step by step. It includes the phonetic dictionary, language model, grammar file, acoustic speech database and the trained acoustic model creation.

This system is a Sinhala speech recognition voice dial and since there is no such speech database which is done earlier was available, the speech has to be taken from the scratch to develop the system.

The first stage of any speech recognizer is the collection of sound signals. Database should contain a variety of enough speakers recording. The size of the database is compared to the task we handle. For this application only little number of words was considered. This research aims only the written Sinhala vocabulary that can be applied for voice dialing. Altogether twelve words were considered with the ten numbers including two initial calling words “amatanna” and “katakaranna”. Here the Database has two parts, the training part and the testing part. Usually about 1/10th of the full speech data is used to the testing part. In this research 3000 speech samples were used for training and 150 speech samples were used for testing.

Before collecting data, a speech database was created. The database was included with the Sinhala speech samples taken from variety of people who were in different age levels. Since there was no such database published anywhere for Sinhala language relevant for voice dialing, speech had to be collected from Sinhala native speakers.

The prepared sentences in the prompt sheet were recorded by using thirty (30) native speakers since this is speaker independent application. The speakers were selected according to the age limits and divided them into eight age groups. Four people were selected from each group except one age group. Two females and two males were included into each age group. One group only contained two people with one female and one male. Each speaker was given 100 sentences to speak and altogether 3000 speech samples were recorded for training. The description of speakers such as gender and age can be found in Appendix A. If there was an error in the recording due to the background noise and filler sounds, the speaker was asked to repeat it and got the correct sound signal. Since the proposed system is a discrete system, the speakers have to make a short pause at the start and end of the recording and also between the words when they were uttered. Speech was recorded in a quiet room and the recordings were done at nights by using a condenser recorder microphone. The sounds were recorded under the sampling rate of 44.1 kHz using mono channel and they were saved under *.wav format.

Speech recording files were saved in the file format of MS WAV. The “Praat“ software was used to convert the 44.1 kHz sampling frequency signals to 16 kHz frequency signals since the frequency should be 16kHz of the training samples. Audio files were recorded in a medium length of 11 seconds. Since there should be a silence in the beginning and the end of the utterance and it should not be exceeded 0.2 seconds, the “Praat” software was used to edit all 3000 sound signals.

The pronunciation dictionary was implemented by hand since the number of words used for the voice dialing system is very few. It is used only 12 words from the Sinhala vocabulary. To create the dictionary, the International Phonetic Alphabet for Sinhala Language and the previously created dictionaries by CMU Sphinx were used. But the acoustic phones were taken mostly by studying the different types of databases given by the Carnegie Mellon University’s Sphinx Forum (CMU Sphinx Forum).

Two dictionaries were implemented for this system. One is for the speech utterances and the other one is for filler sounds. The filler sounds contain the silences in the beginning, middle and at the end of the speech utterances. The attachment of the two types of dictionaries can be found on the Appendix A. They are referred to as the languagedictionaryand thefiller dictionary.

The language model was built using the cmuclmtk software. First of all the reference text was created and that text (svd.text) can be found in Appendix A. It was written in a specific format. The speech sentences were delimited byandtags.

Then the vocabulary file was generated by giving the following command.

Then the ARPA format language model was generated using these commands.

The final output containing the language model needed for the training process is svd.lm.dmp file. This is a binary file.

Before starting the acoustic model creation, the following file structure was arranged as described by the CMU Sphinx tool kit guide. The name of the speech database is “svd” (Sinhala Voice Dial). The content of these files is given in Appendix A.

Setting up the training scripts

The command prompt terminal is used to run the scripts of the training process. Before starting the process, terminal was changed to the database “svd” directory and then the following command was run.

Set up the database

These values were filled in at configuration time. The Experiment name, will be used to name model files and log files in the database.

Set up the format of database audio

Since the database contains speech utterances with the ‘wav’ format and they were recorded using MSWav, the extension and the type were given accordingly as “wav” and “mswav”.

This process was done automatically when having the right file structure in the running directory. The naming of the files must be very accurate. The paths were assigned to the variables used in main training of models.

# Number of tied states (senones) to create in decision-tree clustering

The approximate number of senones and number of densities is provided in the table below.

The default parameter used for sound files in Sphinx is a rate of 16 thousand samples per second (16KHz). If this is the case, then the etc/feat.params file will be automatically generated with the recommended values. The Recommended values are:

The following were properly configured in theetc/sphinx_train.cfg.

# These variables, used by the decoder, have to be user defined, and

# may affect the decoder output

After setting all these paths and parameters in the configuration file as described above, the training was proceeded. To start the training process the following command was run.

Scripts launched jobs on the machine, and it took few minutes to run.

After the training process, the acoustic model was located in the following path in the directory. Only this folder is needed for the speech recognition tasks.

We need only that folder for the speech recognition tasks we have to perform.

150 speech samples were used as testing data. The aligning results could be obtained after the training process. It was located in the following path in the database directory.

4.1.7Parameters to be optimized

WER was given as a percentage value. It was calculated according to the following equation

Accuracy was also given as a percentage. That is the opposite value of the WER. It was calculated using the following equation

In this section, the implementation of voice dialer for android mobile application is described. The application was developed using the programming language JAVA and it was done using the Eclipse IDE. It was tested in both the emulator and the actual device. The application is able to recognize the spoken digits by any speaker and dial the recognized number. To do this process the trained acoustic model, the pronunciation dictionary, the language model and the grammar files were needed. The speech recognition was performed by using these models in the mobile device itself by using the pocketsphinx library. It is a library written in C language to use for embedded speech recognition devices in Android platform.

The step by step implementation and integration of the necessary components were discussed in detail in this section.

When inputting the resource files to the Android application, they were added in to theassets/directory of the project. Then the physical path was given to make them available for pocketsphinx.

After adding them, the Assets directory contained the following resource files.

First of all the recognizer should be set up by adding the resource files. The model parameters taken after the training process were added as the HMM in the application. The recognition process was depended mainly on this resource files. Since the grammar files and the language model were added as assets, these two can be used for the recognition process of the application as well as the HMM. The utterances can be recognized from either the grammar files or language model. The whole process is coded using the Java programing language. 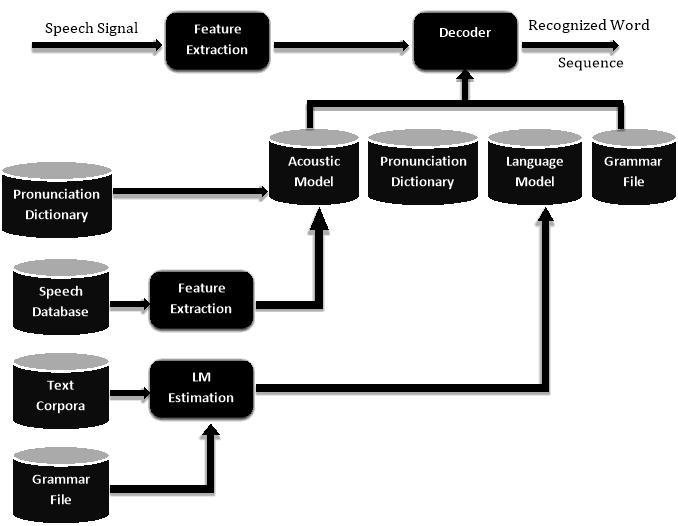