Abstract – As Smartphone is getting more potent, can do more superior stuffs that previous required a computer. For employing the high processing power of Smartphone is mobile computer vision, the ability for a device to capture; process; analyze; understanding of images. For mobile computer vision, Smartphone must be faster and real time. In this study two applications have been developed on Android platform using OpenCV and core library called as CamTest with own implemented algorithms. Efficiency of two Android applications have been compared and found that OpenCV performs faster than CamTest. The results of examining the best object detection algorithm with reverence to efficiency shows that FAST algorithm has the finest blend of speed and object detection performance. Next projected object recognition system using FAST algorithm, which uses SVM, BPNN for training and validation of object in real time. The application detects the object perfectly with recognition time around 2 ms using SVM and 1 ms using BPNN.

As Smartphone is the perfect combination of personal digital assistant, media player, camera and several other stuffs. It has entirely changed the past about mobile phone. In the early days of Smartphone application development only mobile company was able to develop. After the introduction of Android OS in 2007, Smartphone application development is high in demand. Android was developed by Google with Linux core kernel and GNU software stuffs. [16].

As Smartphone processors such as MediaTek, ARM, NVIDIA Tegra, and Snapdragon are achieving more computation capability showing a fast growth of mobile computer vision applications, like image editing, augmented reality, object recognition. Long processing time due to the high computational difficulty averts mobile computer vision algorithms from being practically used in mobile phone applications. To overcome this problem, researchers and developers have explored the libraries such as OpenGL and OpenCV [2]. Application developers will face lot problems as he does not having basic idea to process real time video. OpenCV library is the solution which is written in C, C++ language, reduces the complexity for development and research [17] [2].

Real-Time recognition and detection of objects is complex and favorite area for research in the today’s fast growing mobile computer vision technology. Applications like machine vision, visual surveillance; robot navigation are the best examples [4].Object detection and recognition consist of three steps basically, first is the feature extraction, second classification and third is the recognition of object using machine learning and several other technologies [3].

In this paper, real time video processing efficiency was find using OpenCV [17] and CamTest with support of core library. Next analyze best object detection algorithm with respect to efficiency in support with OpenCV library. Projected real time object recognition system using FAST algorithm [12], SVM [15] and BPNN [25]. All the stuffs have been conducted on LG Optimus Vu Smartphone with Android 4.0.4 OS.

The Android operating system is like other Smartphone OS, with stacked structure [2][16]. Android operating system stack consist on several layers such Kernel Layer,System Libraries,Dalvik Virtual Machine layer (i.e Android Runtime layer),Application Framework layer and on top Applications layer [2][16].The Kernel gives basic funtionalities like network management memory management, process management, device management. Libraries are used for different oprations like internet security [2][16].Android Runtime consist of Dalvik Virtual Machine which is optimized for Android and provides core libraries.The Application Framework layer gives services to the installed applications in the form of Java Class Library. [2][16].Application developers takes the services of this layer for application development [2][16].Application layer is the top layer in the stack where your application will get install [2][16].

The OpenCV library was officially developed and introduced by Intel in 1999 to enforce CPU and GPU exhaustive application [17]. The earlier version of OpenCV was written in C[27]. From the edition 2.0 OpenCV provided both C and C++ interfaces[27]. In the next edition of 2.2 they had introduces Android port with some sample applications of image processing. Currently it has several optimized methods with the version OpenCV 2.4.9[27] [17].

To find and compare the efficiency of OpenCV and CamTest, each processing method of mobile computer vision was applied and average value was calculated [2]. The input format of video frame should be in standard form such as RGB space[2][27].

Each pixel of video frame is threshold with a constant number T. If it is greater than T, pixel will be set 1, otherwise 0.

Where f(x, y) is the original frame and g(x, y) is the threshold frame. The descriptions of processing methods are shown in Table I.

First designed application layout using JAVA and XML. Then, the processing methods and object detection algorithms are written using JAVA and OpenCV. The tools used for designing and programming are Android SDK [16], OpenCV [17] and JAVA SDK.Application file is then installed to the LG Optimus Vu. If there are no errors, then started to measure the result regarding frame processing rate. After all the data had been collected, and the result is analyzed and compared with the theory. The Application flow is shown in Fig.1.0 and Fig.1.1

For the calculation of processing efficiency of OpenCV and CamTest is calculated by following formula.

Frame Processing Ratio is as follows,

As from Table II, FPR shows significant differences between OpenCV and CamTest.If there is Positive FPR ratio value e.g N, then OpenCV is 1/N times better than CamTest.If there is Negative FPR ratio value e.g –M,then CamTest is 1/M times better than OpenCV.As shown in Table III, Frame Processing Rate Ratio(average) is 0.64,leads to a conclusion that OpenCV (1/0.64 times) 1.56 times faster and better than CamTest. 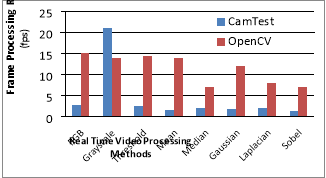 As shown in Table IV and Fig. 2.1, FAST algorithm is having the highest fps value and 10 times faster as compare to SIFT and SURF.The minimus fps for real time object recognition should be at least 15 fps and FAST achieves the almost same thing. So that FAST is having optimum performance in real time scenario while executing real time object detection operation.

As from experimental results shown above in Table IV, we concluded that FAST algorithm [12] is almost several times faster than other algorithms. To recognize the object in real time video FAST algorithm almost achieves 15 fps. As FAST algorithm extracts the corner features accurately and it requires less time for it. So proposed a Real Time Object Recognition system using FAST algorithm is as follows.

As shown in Fig. 3.0 Input object image is captured by Smartphone camera and it is saved to internal storage. FAST corner detector [12] algorithm is applied on the captured image to extract the features. The extracted features should have the same number and location as the viewpoint and corner changes. So the extracted features should be adjusted to the same number and it called as normalization. After the features are adjusted to the same number, weight is calculated for SVM [15] and BPNN [25] for training the features. After that feature database will get created. After the preparation of database object will get recognized in real time video via SVM [15] and BPNN [25]. As system recognizes the object it shows the feature count and recognition time on the display of Smartphone.

As per the above experimentation and results, Most of the real time video processing methods executed using OpenCV having high performance with respect to efficiency than the CamTest. OpenCV gives more attention towards the efficinecy than the CamTest.As per the result obtained from the real time object detction application, FAST algorithm achieves high efficiency, almost 15 fps compared to other algorithms.For the futurescope, like to enhance the FAST algorithm in terms of accuracy.The proposed real time object recognition system gives faster and accurate recognition of object(Hand Watch) on the Smartphone using SVM and BPNN. In future would like to introduce multi object recognition, location tracking on Smartphone platforms,also like to introduce the concept like GPU and parallel computing with OpenCL.