Abstract – Privacy preserving data mining techniques are introduced with the aim of extract the relevant knowledge from the large amount of data while protecting the sensible information at the same time. The success of data mining relies on the availability of high quality data. To ensure quality of data mining, effective information sharing between organizations becomes a vital requirement in today’s society. Privacy preserving data mining deals with hiding an individual’s sensitive identity without sacrificing the usability of data. Whenever we are concerning with data mining, Security is measure issue while extracting data. Privacy Preserving Data Mining concerns with the security of data and provide the data on demand as well as amount of data that is required.

Data mining techniques have been widely used in many areas especially for strategic decision making. The main threat of data mining is to security and privacy of data residing in large data stores. Some of the information considered as private and secret can be bought out with advanced data mining tools. Different research efforts are under way to address this problem of privacy preserving and preserving security. The privacy term has wide range of different meanings. For example, in the context of the health insurance accountability and portability act privacy rule, privacy means the individual’s ability to control who has the access to personal health care information. In organization, privacy means that it involves the definition of policies stating which information is collected, how it is used, how customers are involved and informed in this process. We can considering privacy as “Individual’s desire and ability to keep certain information about themselves hidden from others.” Privacy preserving data mining refers to the area of data mining that seeks to safeguard sensitive information from unsolicited disclosure. Historically, issues related to PPDM were first studied by the national statistical agencies interested in collecting private social and economical data, such as census and tax records, and making it available for analysis by public servants, companies, and researchers. Building accurate socio-economical models is vital for business planning and public policy. Yet, there is no way of knowing in advance what models may be needed, nor is it feasible for the statistical agency to perform all data processing for everyone, playing the role of a “trusted third party”. Instead, the agency provides the data in a sanitized form that allows statistical processing and protects the privacy of individual records, solving a problem known as privacy preserving data publishing. There are many methods for preserving the privacy. In this surevey many methods try to compute the answer to the mining without revealing any additional information about user privacy.

In without trusted party each party will calculate their own partial support and add their own random number and sends the result to the next party in the ring so that the other party will never know the result of others and in last the initiator party will disclose the result that is global support.

Approximately all Privacy Preserving data mining techniques rely on Secure multi party communication protocol. Secure multi party communication is defined as a computation protocol at the last part of which no party involved knows anything else except its own inputs the outcome, i.e. the view of each party during the execution can be effectively simulated by the input and output of the party. Secure multi party communication has commonly concentrated on two models of security. The semi-honest model assumes that every party follows the rule of the protocol, but is free to later use what it sees during execution of the protocol. The malicious model assumes that parties can arbitrarily cheat and such cheating will not compromise moreover security or the outcome, i.e. the results from the malicious party will be correct or the malicious party will be detected. Most of the Privacy Preserving data mining techniques assume an intermediate model, Preserving Privacy with non-colluding parties. A malicious party May dishonest the results, but will not be able to learn the private data of other parties without colluding with another party.

M. Hussein et al.’s Scheme (MHS) was introduced to improve privacy or security and try to reduce communication cost on increasing number of sites. Behind this main idea was to use effective cryptosystem and rearrange the communication path. For this, two sites were discovered. This algorithm works with minimum 3 sites. One site acts as Data Mining Initiator and other site as a Data Mining Combiner. Rests of other sites were called client sites. This scenario was able to decrease communication time. Fig. shows MHS algorithm.

The working of the algorithm is as follows:

The initiator generates RSA public key and a private key. It sends the public key to combiner and all other client sites.

3. All Client sites encrypt their computed data using public key and send it to the combiner.

4. The combiner merges the received data with its own encrypted data, encrypts it again and sends it to initiator to find global association rules.

5. Initiator decrypts the received data using the private key. Then it merges its own local data mining data and computes to find global results.

6. Finally, it finds global association rules and sends it to all other sites. 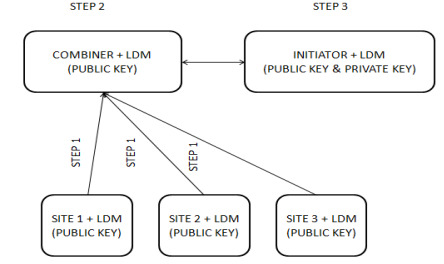 Enhanced M. Hussein et al.’s Scheme (EMHS) was introduced to improve privacy and reduce communication cost on increasing number of sites. This algorithm also works with minimum 3 sites. One site acts as Data Mining Initiator and other site as a Data Mining Combiner. Rests of other sites were called client sites . But this algorithm works on the concept of MFI (Maximal Frequent Itemset) instead of Frequent Itemset.

b) RSA (Rivest, Shamir, Adleman) Algorithm: one of the widely used public key cryptosystem. It is based on keeping factoring product of two large prime numbers secret. Breaking RSA encryption is tough.

In this technique, they used modified EMHS algorithm for improving its efficiency by using Elliptic curve cryptography. Here Elgamal cryptography technique is used which is of ECC for homomorphic encryption.

a)A wishes to exchange message M with B[9].

c)B computes its Public Key Y = gx mod p and sends it to A.

j) Thus, Message M is exchanged between A and B securely.

Step2:-Each party will generate their own random number R1, R2……….RN

Step4:-Let RC=N, and Pij=0 (RC is round counter and Pij is partial support)

Step6:-Site P2 computes the PSj for each item received the list using the

In ck secure sum technique, mainly focused on for computing global support within a scenario of homogeneous database and provides the high security to the database and hacking of data is zero.

In this paper we reviewed five privacy preserving technique in horizontally partitioned database. In MHS algorithm RSA cryptography is used. In EMHS algorithm, by using MFI approach accuracy is high compared to MHS. Modified EMHS algorithm used elgamal technique so privacy is high than EMHS technique. Randomized response technique provides high security to the database compared to other techniques. In future we can compute less number of rounds instead of n number of rounds. Here , we can use encryption technique for encrypting random number and sends it to the predecessor.