The open nature of the wireless medium leaves it vulnerable to intentional interference attacks, typically referred to as jamming. This intentional interference with wireless transmissions can be used as a launchpad for mounting Denial-of-Service attacks on wireless networks. Typically, jamming has been addressed under an external threat model. However, adversaries with internal knowledge of protocol specifications and network secrets can launch low-effort jamming attacks that are difficult to detect and counter. In this work, we address the problem of selective jamming attacks in wireless networks. In these attacks, the adversary is active only for a short period of time, selectively targeting messages of high importance. We illustrate the advantages of selective jamming in terms of network performance degradation and adversary effort by presenting two case studies; a selective attack on TCP and one on routing.We show that selective jamming attacks can be launched by performing real-time packet classification at the physical layer. To mitigate these attacks, we develop three schemes that prevent real-time packet classification by combining cryptographic primitives with physical-layer attributes. We analyze the security of our methods and evaluate their computational and communication overhead. 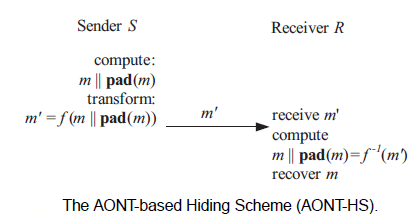 We propose a solution based on All-Or- Nothing Transformations (AONT) that introduces a modest communication and computation overhead. Such transformations were originally proposed by Rivest to slow down brute force attacks against block encryption algorithms . An AONT serves as a publicly known and completely invertible pre-processing step to a plaintext before it is passed to an ordinary block encryption algorithm.

Jamming attacks are much harder to counter and more security problems. They have been shown to actualize severe Denial-of-Service (DoS) attacks against wireless networks. In the simplest form of jamming, the adversary interferes with the reception of messages by transmitting a continuous jamming signal , or several short jamming pulses jamming attacks have been considered under an external threat model, in which the jammer is not part of the network. Under this model, jamming strategies include the continuous or random transmission of highpower interference signals

In this paper, we address the problem of jamming under an internal threat model. We consider a sophisticated adversary who is aware of network secrets and the implementation details of network protocols at any layer in the network stack. The adversary exploits his internal knowledge for launching selective jamming attacks in which specific messages of “high importance” are targeted. For example, a jammer can target route-request/route-reply messages at the routing layer to prevent route discovery, or target TCP acknowledgments in a TCP session to severely degrade the throughput of an end-to-end flow

To launch selective jamming attacks, the adversary must be capable of implementing a “classify-then-jam” strategy before the completion of a wireless transmission. Such strategy can be actualized either by classifying transmitted packets using protocol semantics, or by decoding

packets on the fly. In the latter method, the jammer may decode the first few bits of a packet for recovering useful packet identifiers such as packet type, source and destination address. After classification, the adversary must induce a sufficient number of bit errors so that the packet cannot be recovered at the receiver [34]. Selective jamming requires an intimate knowledge of the physical (PHY) layer, as well as of the specifics of upper layers

We address the problem of preventing the jamming node from classifying m in real time, thus mitigating J’s ability to perform selective jamming.

The network consists of a collection of nodes connected via wireless links. Nodes may communicate directly if they are within communication range, or indirectly via multiple hops. Nodes communicate both in unicast mode and broadcast mode. Communications can be either unencrypted or encrypted. For encrypted broadcast communications, symmetric keys are shared among all intended receivers. These keys are established using preshared pairwise keys or asymmetric cryptography.

Consider the generic communication system depicted in Fig. At the PHY layer, a packet m is encoded, interleaved, and modulated before it is transmitted over the wireless channel. At the receiver, the signal is demodulated, deinterleaved, and decoded, to recover the original packet m.

Moreover, even if the encryption key of a hiding scheme were to remain secret, the static portions of a transmitted packet could potentially lead to packet classification. This is because for computationally-efficient encryption methods such as block encryption, the encryption of a prefix plaintext with the same key yields a static ciphertext prefix. Hence, an adversary who is aware of the underlying protocol specifics (structure of the frame) can use the static ciphertext portions of a transmitted packet to classify it.

We illustrate the impact of selective jamming attacks on the network performance. implement selective jamming attacks in two multi-hop wireless network scenarios. In the first scenario, the attacker targeted a TCP connection established over a multi-hop wireless route. In the second scenario, the jammer targeted network-layer control messages transmitted during the route establishment process

selective jamming would be the encryption of transmitted packets (including headers) with a static key. However, for broadcast communications, this static decryption key must be known to all intended receivers and hence, is susceptible to compromise. An adversary in possession of the decryption key can start decrypting as early as the reception of the first ciphertext block.

We propose a strong hiding commitment scheme (SHCS), which is based on symmetric cryptography. Our main motivation is to satisfy the strong hiding property while keeping the computation and communication overhead to a minimum. 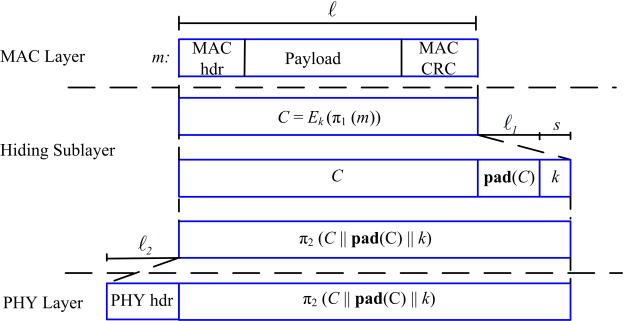 information is permuted as a trailer and encrypted, all receivers in the vicinity of a sender must receive the entire packet and decrypt it, before the packet type and destination can be determined. However, in wireless protocols such as 802.11, the complete packet is received at the MAC layer before it is decided if the packet must be discarded or be further processed . If some parts of the MAC header are deemed not to be useful information to the jammer, they can remain unencrypted in the header of the packet, thus avoiding the decryption operation at the receiver.

we present a packet hiding scheme based on cryptographic puzzles. The main idea behind such puzzles is to force the recipient of a puzzle execute a pre-defined set of computations before he is able to extract a secret of interest. The time required for obtaining the solution of a puzzle depends on its hardness and the computational ability of the solver. The advantage of the puzzlebased scheme is that its security does not rely on the PHY layer parameters. However, it has higher computation and communication overhead

We consider several puzzle schemes as the basis for CPHS. For each scheme, we analyze the implementation details which impact security and performance. Cryptographic puzzles are primitives originally suggested by Merkle as a method for establishing a secret over an insecure channel. They find a wide range of applications from preventing DoS attacks to providing broadcast authentication and key escrow schemes