In NEMO(NETWORK MOBILITY) and when they are connected to the Internet through mobile or even laptops and during the move from one place to another process occurs disconnect this process its output practically at the point of contact with SMR within the network NEMO have changed any that HA(HOME AGENT) was Mtaatsal with SMR in the network and moved ha to another area and want SMR in other network to communicate with ha and thus the transformation of the SMR to SMR Other.

During the handoff process that leads to the loss of Internet connection and thus can not ha sending and receiving the packet data and this leads to a loss of packet data and delay during normal time.

In NEMO BSP and during cutting and re-connect only Coa in SMR is capable of recording HA, which affects the process of completing handoff in terms of packet loos and the delay

One solution that will be shown off here is the use of macro mobility mangement scheme for NEMO network, which integrates improved fhmipv6 with the mobile network

There are two well known mechanisms in internet mobility to reduce the handoff delay are classified into host mobility HMIPV6, FMIPV6, HMIPV6)as well as the network mobility(NEMO BSP)[1-3].

According to host mobility , the main purpose of HMIPv6 is [4] to decrease the frequency and latency of location updates caused by MN’s mobility where as the FMIPv6[5] can reduce the handover latency and packet loss during handover of MN through providing all the necessary information of next AR for layer 3 handover before going to the part of its subnet. Due to further reduce signaling overhead and packet loss, it is possible to use HMIPv6 and FMIPv6 jointly known as FHMIPv6 [6]. If these mechanisms are combined in NEMO environment then mobile.

Node (MN) and mobile router(MR) performs different IP layer handoff. Hence it is needed to apply some mechanisms which are able to adapt improved FHMIPv6[7] in order to achieve uninterrupted internet connection during handoff for mobile routers with its nods in NEMO network [8]. As an extension of NEMO BSP, in this research some NEMO based handoff schemes have been analyzed in terms of packet loss and handoff delay. This research structured as follows: firstly, evaluates some mobility management schemes to achieve seamless handoff in NEMO network . then the detailed operation of the proposed schemes discussed.

After that, the performance of the proposed scheme is evaluated via network simulator (NS-2).

In NEMO and when they are connected to the Internet through mobile or even laptops and during the move from one place to another process occurs disconnect this process its output practically at the point of contact with SMR within the network NEMO have changed any that HA was Mtaatsal with SMR in the network and moved ha to another area and want SMR in other network to communicate with ha and thus the transformation of the SMR to SMR Other.

During the handoff process that leads to the loss of Internet connection and thus can not ha sending and receiving the packet data and this leads to a loss of packet data and delay during normal time.

There are several extensions of NEMO Basic Support Protocol (NEMO BSP) in order to allow multihoming, nested mobile networking and the route optimization.

The authors in paper [9], presents a new architecture and mechanism in order to optimize the routing mechanisms in nested mobile networks for NEMO basic support and the performance analysis of this new architecture is properly done for reducing the handoff latency. In accordance with the proposed mechanism, two types of Mobile Router (MR) are distinguished primarily. MRs which have direct access to the infrastructure via their egress interfaces, are denoted as TLMRs for Top Level MRs. All others mobile routers in the nested mobile network are denoted as IMRs for Intermediate Mobile Routers. The proposed solution is achieved by adding functionality to the Mobile Nodes/ Mobile Routers (MN/MR) and Home Agents (HA). A new one-bit field “R” is added to the Router Advertisement (RA) messages. This field is set to 1 by MR and inform other nodes that they are connected to a mobile/moving network. As soon as a MR connects to a new point of attachment and receives a new CoA, it starts advertising a RA message in its mobile network after setting the field R to 1. When a new MR visits this mobile network and receives a RA with the field R set to 1, it behaves as an IMR as shown in Figure 1. With the intention of providing information about the CoA of Mobile Nodes, a new “CoA option” is added to binding ppdate messages. Indeed except the new CoA option field, there is no additional message or overhead in this scheme. By applying this mechanism it is possible to avoid any ingress filtering mechanism. Additionally the home address of the BU message is added to the security policy, so that packets originated from this address can be forwarded. This solution minimizes the registration delay component of the overall handoff latency to some extent. However it is still an open issue for current researchers. 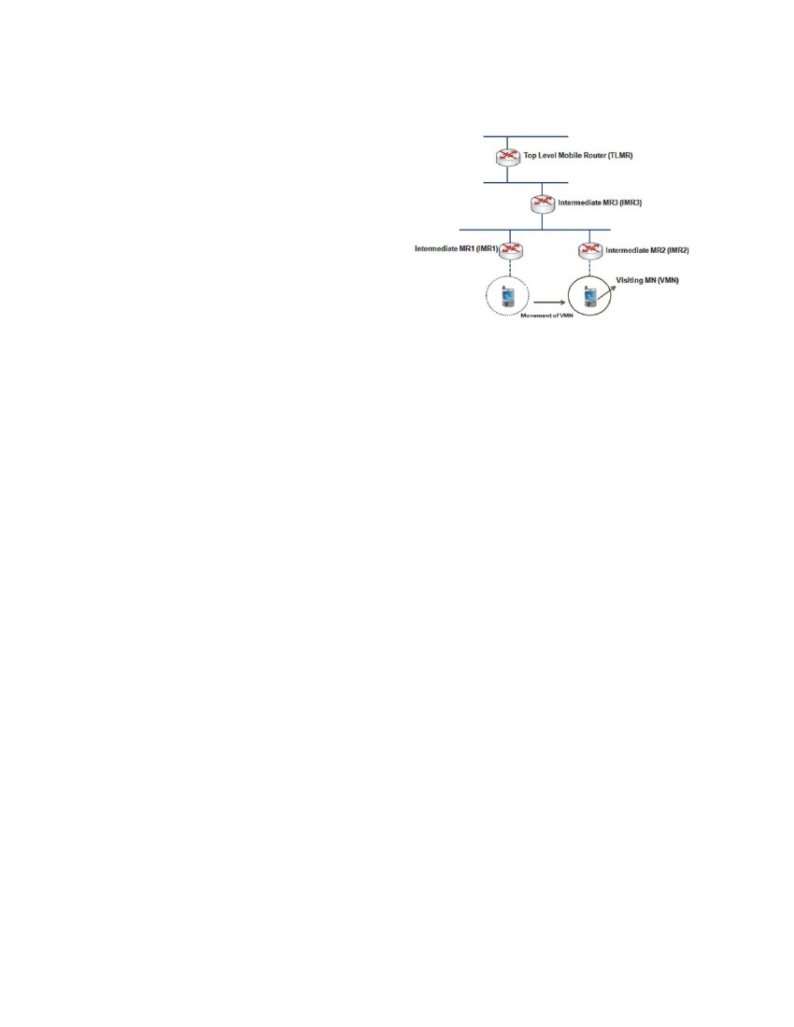 In [11], explains the measurement of the performance of NEMO in a NEMO tested with explored the handoff performance and routing overheads in NEMO network. In addition, this paper also explained the non- optimized handoff performance of NEMO is not appropriate for the sensitive applications, like voice-over-IP since handoff delays. The handoff delay in NEMO BSP is up to 2.75 s. Moreover, it is also shown that routing overheads in NEMO BSP makes the use of scarce wireless network resources inefficiently. Therefore, to overcome the shortcomings of NEMO BSP, they propose a new handover scheme Make-Before-Break (MBB) handoffs to use multiple interfaces simultaneously as well as expanded OptiNets RO scheme. The advantages of the MBB handoffs is that it makes possible to take the advantage of high-speed of mobile router but has short range radio technologies except cooperating the service that it proposes to mobile network nodes (MNN). However, the possible limitation to use multiple interfaces in mobile devices, like an increase in power consumption, interference originated by the usage of multiple interfaces with increasing size and cost. But these limitations are only applicable for the mobile host. It does not give the restriction of using multiple interfaces on MRs for the do not limit the use of multiple interfaces on MRs to the similar level. Extended OptiNets RO scheme has increase performance to remove the packet overhead in NEMO BSP. Therefore it can be said that MBB handoff scheme with the extended OptiNets RO scheme improve the performance with highly sensitive application in terms of packet loss and delay.

Moreover in [12], presents a modified fast-Integrated light-NEMO handoff scheme which combines the Modified Fast Integrated-Handover scheme and the Light- NEMO network model due to achieve a seamless handoff in nested mobile networks with analytical results. The advantages of this scheme are that it decrease the handoff delay as well as improve the service disruption time during the handoff. However, further improvement is needed to achieve seamless handoff completely by applying appropriate route optimization mechanism. In [13], presents a solution of route optimization based on multihoming mechanism in local mobility management framework named as multihoming-LRO. The proposed scheme gives the solution for optimized route as well as supports fast handover. Here, Multiple local mobility anchors(LMAs) requests for mobile node(MN) connecting to it with replacing information to each other within same local mobility Domain (LMD). In multihoming-LRO, it is possible for mobile router (MR) to connect to outside with having multiple mobile routers. When central link is not good in quality then MR can attach to secondary LMA earlier than primary link is stoppedthrough identifying the main LMA and secondary LMA as well as setting two threshold of link performance. If MR require then two links are able to provide concurrently to MR. when one link is not work well, then it is possible for MR to communicate with other node by the help of another link. Therefore, it is possible to improve robustness with providing self-recovery as well as smaller binding cache. Fast handover intra-LMD and inter-LMD can be performed easily through establishing new link before disconnecting old one. This scheme generates only one tunnel between the closest MR and it’s HA. Hence it can decrease the forward and reverse date path without registration with it’s HA again when MR moves inside LMD. As a result,signaling cost is reduced. Moreover, the control of nested-NEMO’s topology that is actively altered will be improved through moving the mobility management function to fix node from mobile node. In this scheme, no need to add signal cost when topology of the total nested-NEMO is modified with remaining MR in bone- network However, how to measuring link’s performance is still an active research area.

Enhanced Macro Mobility Scheme: In order to minimize handoff delay as much as possible in NEMO network, this paper presents an enhanced Macro Mobility managementscheme in NEMO environment which can be identified as MM-NEMO scheme for further reduction of handoff delay. It is assumed that each MAP has MAP Information Table (MIT) that stores information of all neighboring MRs and it is possible to share the information with the neighboring MAP in order to choose the New MR (NMR). Additionally, after receiving Router Advertisement (RA) message, each MAP (CMAP, NMAP) will update the MIT as well [14]. The new LCoA and RCoA are created by CMAP in the place of the Serving MR (SMR) that shows that FBU message is not entailed for CMAP. Therefore, the FBU option is attached within the RtSolPr message as a replacement of the FBU message to perform handoff of the Serving MR with its Local Fixed Node (LFN) in order to accomplish the FBU in advance in NEMO environment. As a result, the CMAP can start fast handoff while it receives RtSolPr from the SMR after L2 triggering. In the proposed scheme no new messages are required to be defined as the improved FHMIPv6 [7] is assumed to be integrated with mobile networks. Figure 2 illustrates the handoff operation of the proposed scheme and accordingly explained in details [15]:

Simulation Approach: The simulation is carried out by the Network Simulator (NS2) [16] in order to determine the percentage of packet loss in the real scenarios. Packet loss has been used as performance metrics for proposed scheme. The parameters set in case of the simulated partof proposed scheme are: