Programming languages play the most important role in the creation of various Software’s. Application, and Webpages etc. Just because of the existence of programming languages today everything related to New Technology is possible. For example the various Social Networking sites that we use is a result of Programming Language, the Mobile phones that we use in our daily life is a brilliant outcome of programming as every IC in the circuit of the mobile phones are programmed due to which it works.

The most important outcome of Programming Language is the creation of Operating Systems (OS). OS is something without which we cannot use our PC’s or Laptop’s or even our mobile phones. OS acts as a base for every single function of a device to work in short it provides an important platform for the working.

If no programming languages were introduced then today it nearly impossible for the people to use computers, mobile phones, servers, and various other things. But thanks to the developers of the various types of Languages that made peoples life very easy and mobile.

Java was developed by James Gosling at Sun Microsystems in 1992 and was officially released in 1995. JAVA Technology is a programming language that is used for meeting the objectives of current challenges and opportunities in the present computing realm.

Java Virtual Machine (JVM): JVM is an Interpreter for JAVA programming language,  i.e., it is the only way to convert a Byte Code into machine language. The Byte Code cannot be converted using any technique other than the JVM. Therefore as I said above Byte Code somehow helps Java in being secure.

Java Runtime Environment (JRE): We all know that that the major problem with the programming languages before JAVA was platform dependency i.e., if we want to run the code compiled in Windows Xp in Linux, this was not possible as for that we need a special compiler which works in Linux only. So to solve this problem JRE was launched and became a part of java. Every Operating System have some mandatory files that are needed to run java on that particular OS. So in short JRE in the collection of all those mandatory files needed to run java on various OS’s plus JVM.

Due to JRE today it is possible to use the code written in some OS in any other OS.

The byte code is loaded into JVM using the Class Loader.

JIT is completely responsible for the SECURITY of JAVA.

Now I’ll show you a basic program in java with its output.

Let’s talk about the main() function.

The main function is made up of 5 things.

All programming languages have its own syntax and reserved keywords. JAVA also has these kind of language fundamentals.

Let’s see every fundamental in detail.

Class is a collection of objects of similar types of objects. Objects are nothing but a buffer or an area and are defined by something which have some property and behaviour.

In java objects are created in the HEAP Memory inside the Java Virtual Machine.

Syntax for creating an object in java:

new is a keyword of java which when used creates an object in the HEAP. Now whenever we use the new keyword a space in created in the HEAP memory inside the JVM for the object at runtime.

When we print the reference variable of some class then it prints 3 things:

Graphical representation of HEAP and other memory areas available inside the JVM. 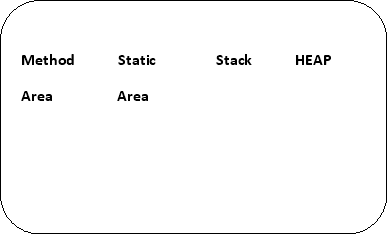 Abstraction is divided into two parts:

Packages is a collection of classes and interfaces. No class can exist without a package included in it. This is the rule of OOP’s. But when we open a class we don’t always make a package in that class, so in this case the rule of OOP’s is violated. So to avoid this problem JAVA has given a feature in its compiler due to which when we compile the program, the compiler automatically creates a package of the respective class during the compile time.

Command to compile the program with a package:

current directory is the same location as the class where the package is to be made.

Program with a package can be executed by using the Command:

When any abnormal condition that comes in a code which can be handled then that situation is known as Exception Handling.

For every exception there are exception classes and exception methods to handle that exception in java by default.

We can easily handle these unwanted exceptions by using try and catch block.

The “finally” block: If an exception occurs in a program then the try and catch block will be executed and then the program terminates in normal condition. But in case of finally before the termination of program finally block also executes.

Every process is divided into two categories:

under the heavy weight processes.

are known as Threads in JAVA.

Basically there are two ways in which we can make a thread:

Every part of a program is called a thread and every thread defines a separate path  of execution.

Priority of which thread will start working first is decided by a program named as Thread  Scheduler which is a program of the Operating System. It gives the priority randomly.

To avoid the corruption of data we use the concept of synchronization in threads.

When we share a single object into multiple threads then the chance of data Corruption arises and to avoid this we need the concept of synchronization.

The keyword synchronized is applied on the function where the variables are assigned values. Due to the concept of synchronization only one thread executes at a time.

Streams are nothing but a special type of buffer. In terms of JAVA streams are flow of bytes.

Streams are divided into two types:

This is a sample program of how to write a file by coding in JAVA.

Serialization is the process using which we can convert an object into a stream. If we have to use an object only once and then we need to use the same object after a long time then we use the concept of serialization.

If we make any variable transient that means those variables are unwanted now and will get no memory in the HEAP inside the JVM.