Language model helps a speech recognizer figure out how likely a word sequence is, independent of acoustics. There is a linguistic and statistical approach to calculate the probability. The linguistic technique tries to understand the syntactic and semantic structure of a language and derive the probabilities of word sequences using this knowledge. The challenge here is to have proper co occurrence statistics of the unit of recognition. The approach in use evaluates a huge text corpus in a statistical way and word transitions. Current language models make no use of the syntactic properties of natural language but rather use very simple statistics such as word co-occurrences. Recent results show that incorporating syntactic constraints in a statistical language model reduces the word error rate on a conventional dictation task by 10% [M.S.Salam, 2009].

The approach proposed here uses factored language model which incorporates the morphological knowledge. Factored language models have recently been proposed for incorporating morphological knowledge in the modeling lexicon. As suffix and compound words are the cause of the growth of the vocabulary, a logical idea is to split the words into shorter units.

The language model proposed in this research is based on morphology. A morphological analyser obtains and verifies the internal structure of a given complete word form [Rosenfield, 2000]. Building a morphological analyser for highly inflecting, agglutinative languages is a challenging task. It is very difficult to build a high performance analyser for such languages. The main idea here is to divide a given word form into a stem and single suffix.

Morphology plays a much greater role in Telugu. An inflected Telugu word starts with a stem and may have suffix(s) added to the right according to complex rules of saMdhi. This research proposes a new data structure based on Inverted Index and an efficient algorithm for accessing its elements. Few researchers have used tries for efficient retrieval from dictionary, earlier. This research work is different from earlier work in two ways:

a) variation to the structure of trie

b) the method of identifying and combining inflections.

A trie is a tree based data structure for storing strings in order to support fast pattern matching. A trie T represents the strings of set S of n strings with paths from root to the external node of T.

The trie considered here is different from standard trie in two ways:

The node structure is changed such that, each node of the trie is represented by a triplet <C,R,Ind>. 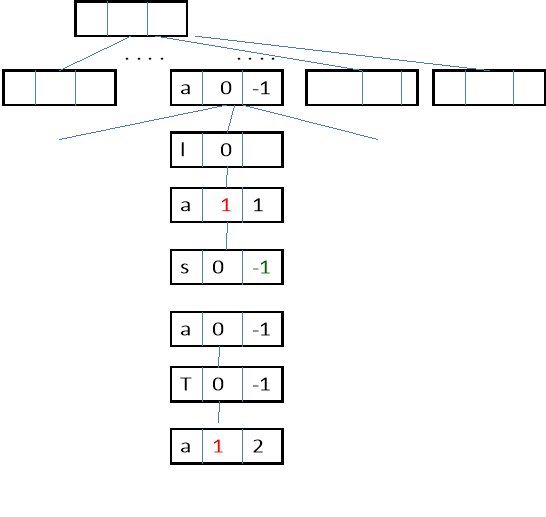 The following are the main advantages of tries overbinary search trees(BSTs):

The corpus consists of the following modules:

This accommodates all the stems of the language. Stem word dictionary is implemented as an Inverted Index for better efficiency. The Inverted index will have the following two data structures in it:

Occurrence list is constructed based on the grammar of the language, where each entry of the list contains the pair 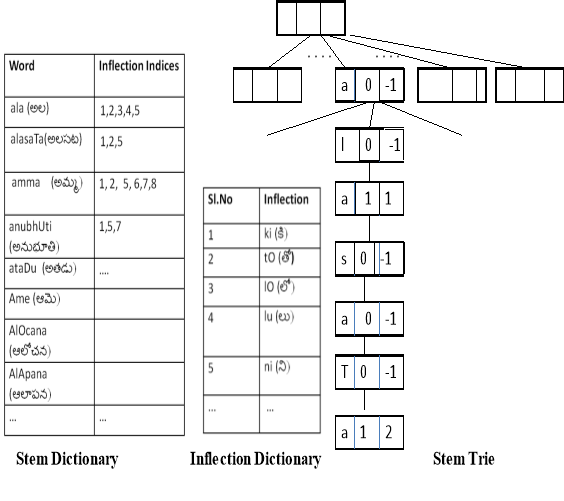 Input the word segmenter is an Inflected word. Syllabifier takes this word and divides the word into syllables and identifies if the letter is a vowel or a consonant. After applying the rules syllabified form of the input will be obtained. Once the process of syllabification is done, this will be taken up by the analyzer. Analyzer separates the stem and inflection part of the given word. This stem word will be validated by comparing it with the stem words present in stem dictionary. If the stem word is present, then the inflection of the input word will be compared with the inflections present in inflection dictionary of the given stem word. If both the inflections get matched then it will directly displays the output otherwise it takes the appropriate inflection(s) through comparison and then displays.

Syllabification is the separation of the words into syllables, where syllables are considered as phonological building blocks of words. It is dividing the word in the way of our pronunciation. The separation is marked by hyphen. In the morphological analyzer, the main objective is to divide the given word into root word and the inflection. For this, we divide the given input word into syllables and we compare the syllables with the root words and inflections to get the root word and appropriate inflection.

For example, considering the word “nAnnagariki” (à°¨à°¾à°¨à±à°¨à°-à°¾à°°à°¿à°•à°¿) meaning “to father”, the input is given the user in Roman transliteration format. This input is basically divided into lexemes as:

Now, the array is processed which gives the type of lexeme by applying the rules of syllabification one by one.

“ No two vowels come together in Telugu literature.”

“ Initial and final consonants in a word go with the first and last vowel respectively.”

Telugu literature rarely has the words which end up with a consonant. Mostly all the Telugu words end with a vowel. So this rule does not mean the consonant that ends up with the string, but it means the last consonant in string. The application of this rule2 changes the array as following:

This generated output is further processed by applying the other rules.

“ VCV: The C goes with the right vowel.”

This output is not yet completely syllabified, one more rule is to be applied which finishes the syllabification of the given user input word.

“ Two or more Cs between Vs – First C goes to the left and the rest to right.”

It is the string which is in the form of VCCC*V, then according to this rule it is split as VC – CC*V. In the above output VCCV in the string can be syllabified as VC – CV. Then the output becomes:

Now this output is converted to the respective consonants and vowels. Thus giving the complete syllabified form of the given user input. 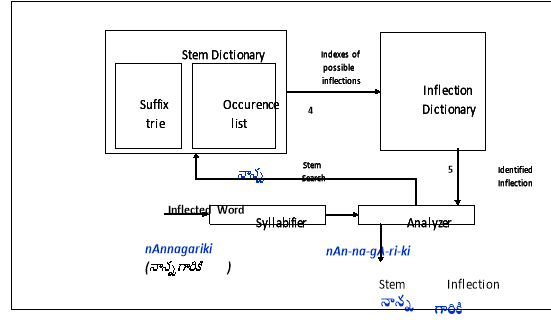 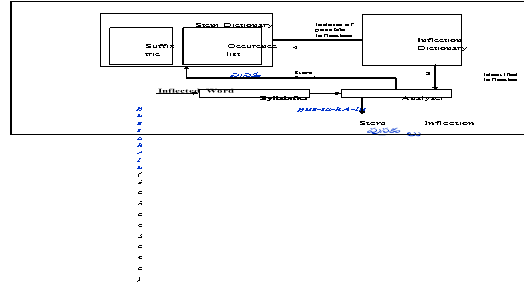 Fig 5.6: Word Segmenter showing an inflected word with a change in stem form

SCIL is a procedure

The design of Speech Corrector for Indian Languages, consists of the Syllable Identifier, Phone Sequence Generator, Word Segmenter, and Morpho- Syntactic Analyzer modules. Input speech is decoded by a normal ASR system which gives the identified word as a string. The sequence of phones would be the input to the Word Segmenter module which matches the phonetized input with the root words stored in dictionary module, and generates a possible set of root words. Morpho-Syntactic Analyzer compares the inflection part of the signal with the possible inflections list from the database and gives correct inflection. This will be given to Morph Analyzer to apply morpho-syntactic rules of the language and gives the correct inflected word. 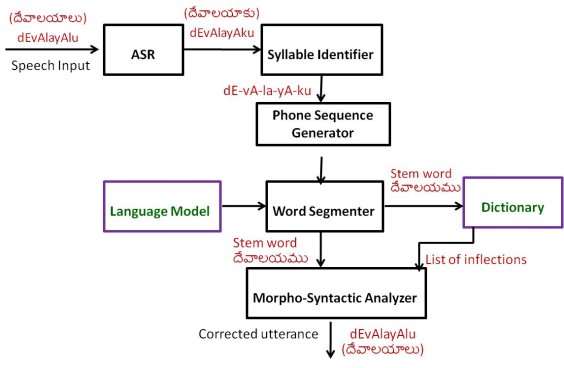 Syllable identifier marks the rough boundaries of the syllables and labels them. At this stage , we get list of syllables separated with hyphen. The user input is syllabified and this would be the input to the next module. E.g. dE-vA-la-yA-ku

As the words in the dictionary are stored at phone level transcription, this module generates the phone sequences from the syllables. E.g. d-E-v-A-l-a-y-A-k-u

This module compares the phonetized input from starting with the root words stored in dictionary module and lists the possible set of root words. The possible root word is dEvAlayamu.

Dictionary contains stems and inflections separately. It does not store inflected words as it is very difficult, if not impossible, to cover all inflected words of the language. The database consists of 2 dictionaries:

Stem dictionary contains the stem words of the language, signal information for that stem which includes the duration and location of that utterance and list of indices of inflection dictionary which are possible with that stem word.

Inflection Dictionary contains the inflections of the language, signal information for that inflection which includes the duration and location of that utterance. Both the dictionaries are implemented using trie structure in order to reduce the search space.

Language model proposed in this work results in reduction in corpus size by using factored approach. The search process is fastened by use of trie based structure. A change to standard trie is proposed.

A post recognition procedure SCIL, is designed which uses the proposed language model and corrects the words misrecognized at inflections. The approach is tested using 1500 speech samples. These samples consist of 100 distinct words , each word repeated 3 times and recorded by 5 speakers in the age group 18-50. It is implemented as a speaker dependent system. An average model is built from the three utterances of each word for each speaker. Each speaker is given a unique ID, using which average model of that speaker is used for testing.