Abstract- Predicting is making claims about something that will happen, often based on information from past and from current state. Neural networks can be used for prediction with various levels of success. The neural network is trained from the historical data with the hope that it will discover hidden dependencies and that it will be able to use them for predicting into future. It is an approach for making prediction efficient using best features on which prediction is more dependent.

Artificial neural networks are computational models inspired by animal central nervous systems (in particular the brain) that are capable of machine learning and pattern recognition. They are usually presented as systems of interconnected “neurons” that can compute values from inputs by feeding information through the network. For example, in a neural network for handwriting recognition, a set of input neurons may be activated by the pixels of an input image representing a letter or digit. The activations of these neurons are then passed on, weighted and transformed by some function determined by the network’s designer, to other neurons, etc., until finally an output neuron is activated that determines which character was read. Mainly three types of ANN models are present single layer feed forward network, Multilayer feed forward network and recurrent network Single layer feed forward network consist of only one input layer and one output layer. Input layer neurons receive the input signals and output layer receives output signals.

In a feed forward network the output of the network does not affect the operation of the layer that is producing this output. In a feedback network however the output of a layer after the layer being fed back into, can affect the output of the earlier layer. Essentially the data loops through the two layers and back to start again. This is important in control circuits, because it allows the result from a previous calculation to affect the operation of the next calculation. This means that the second calculation can take into account the results of the first calculation, and be controlled by them. Weiners work on cybernetics was based on the idea that feedback loops were a useful tool for control circuits. In fact Weiner coined the termcybernetics based on the Greek kybernutos or metallic steersman of a fictional boat mentioned in the Illiad. Neural models ranged from complex mathematical models with Floating point outputs to simple state machines with a binary output. Depending on whether the neuron incorporates the learning mechanism or not, neural learning rules can be as simple as adding weight to a synapse each time it fires, and gradually degrading those weights over time, as in the earliest learning rules, Delta rules that accelerate the learning by applying a delta value according to some error function in a back propagation network, to Pre-synaptic/Post-synaptic rules based on biochemistry of the synapse and the firing process. Signals can be calculated in binary, linear, non-linear, and spiking values for the output. 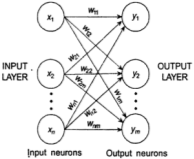 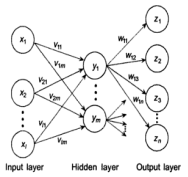 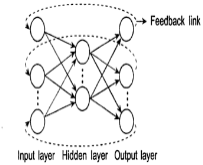 In neurons we can input vectors taken as input and weights are included. With the help of weights and input vectors we can calculate weighted sum and taking weighted sum as parameter we can calculate activation function. There are different activation functions available e.g. thresholding, Signum, Sigmoidal, Hyperbolic Tangent.

The results of these experiments confirm two hypotheses. First, significant performance improvements can be obtained by finding good optimization orders versus the well-engineered fixed order in Jikes RVM. The best order of optimizations per benchmark gave us up to a 20% speedup (FFT) and on average 8% speedup over optimization level O3. Second, as shown in previous work, each of our benchmarks requires a different optimization sequence to obtain the best performance. One ordering of optimizations for the entire set of programs achieves decent performance speedup compared to O3.

However, the “Best Overall Sequence” degrades the performance of three benchmarks (LUFact, Series, and Crypt) compared to O3. In contrast, searching for the best custom optimization sequence for each benchmark, “Best Sequence for Benchmark”, allows us to outperform both O3 and the best overall sequence.

Automatic Feature generation system is comprised of the following components: training data generation, feature search and machine learning [5]. The training data generation process extracts the compiler’s intermediate representation of the program plus the optimal values for the heuristic we wish to learn. Once these data have been generated, the feature search component explores features over the compiler’s intermediate representation (IR) and provides the corresponding feature values to the machine learning tool. The machine learning tool computes how good the feature is at predicting the best heuristic value in combination with the other features in the base feature set (which is initially empty). The search component finds the best such feature and, once it can no longer improve upon it, adds that feature to the base feature set and repeats. In this way, we build up a gradually improving set of features.

In a similar way to the existing machine learning techniques (see section II) we must gather a number of examples of inputs to the heuristic and find out what the optimal answer should be for those examples. Each program is compiled in different ways, each with a different heuristic value. We time the execution of the compiled programs to find out which heuristic value is best for each program. We also extract from the compiler the internal data structures which describe the programs. Due to the intrinsic variability of the execution times on the target architecture, we run each compiled program several times to reduce susceptibility to noise.

The feature search component maintains a population of feature expressions. The expressions come from a family described by a grammar derived automatically from the compiler’s IR. Evaluating a feature on a program generates a single real number; the collection of those numbers over all programs forms a vector of feature values which are later used by the machine learning tool.

For ordering of different optimization techniques using ANN we must need to implement that in 4Cast-XL as it is a dynamic compiler. 4Cast-XL constructs an ANN, Integrate the ANN into Jikes RVM’s optimization driver than Evaluate ANN at the task of phase-ordering optimizations. For each method dynamically compiled, repeat the following two steps 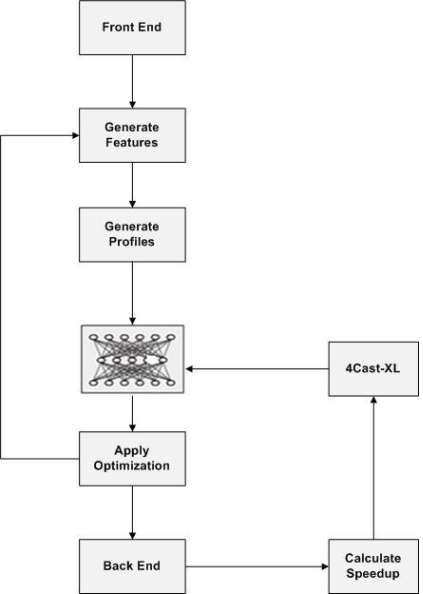 Research work is aimed for optimizing code using artificial neural networks. In order to make this precise, better profiles generated from given set of features using Milepost GCC compiler with ten different programs. Experimental results demonstrate that profiles of program can be used for optimization of code.

This section gives a detailed overview of how Neuro-evolution machine learning is used to construct a good optimization phase-ordering heuristic for the optimizer. The first section outlines the different activities that take place when training and deploying a phase ordering heuristic. This is followed by sections describing how we use 4cast-XL to construct an ANN, how we extract features from methods, and how best features called Profiles and ANNs allow us to learn a heuristic that determines the order of optimizations to apply. It motivates us to apply this approach for different types of predictions using Artificial Neural Networks.

Neural networks can be used for prediction with various levels of success. The advantage of then includes automatic learning of dependencies only from measured data without any need to add further information (such as type of dependency like with the regression). The neural network is trained from the historical data with the hope that it will discover hidden dependencies and that it will be able to use them for predicting into future. In other words, neural network is not represented by an explicitly given model. It is more a black box that is able to learn something.