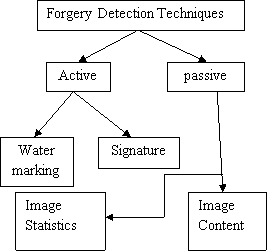 Abstract—Digital images are easy to manipulate and edit using some editing software. So it is difficult to identify the duplicate images. Copy-move manipulations are common form of local processing, where parts of an image are copied and reinserted into another part of the same image. The problem of detecting the copy-move forgery describes an efficient and reliable detection and detects duplicate image regions. Most detection algorithm focused on pixel basis. In this paper propose a new approach to detect forgery image such scale, rotate, etc.

The most common of these three manipulations is removal of undesired objects from the image. Digital image forgery detection techniques are classified into active and passive approaches. In active approach, the digital image requires some pre-processing such as watermark embedding or signature generation at the time of creating the image, which would limit of their application in practice. Moreover, there are millions of digital images in internet without digital signature or watermark. In such scenario active approach could not be used to find the authentication of the image. Unlike the watermark-based and signature-based methods; the passive technology does not need any digital signature generated or watermark embedded in advance.

Copy move manipulations result in duplicate image regions, which practical forensic analyses examine in terms of robust feature representations of parts of the image. Analyzing the image is very important before the preprocessing. After optional preprocessing (e.g., color to grayscale conversion), the image is transformed to the feature space. Feature representation is finding the duplicate region. There are so many methods used to find the duplicate image such as DCT (Discrete Cousine Transform), DWT (Discrete Wavelet Transform), and PCD (Principal Component Analysis). A set of feature vectors represents local image characteristics and is inspected for similarities in a matching procedure. This is achieved either by splitting the image into small blocks, which are then transformed separately, or by finding salient key points and extracting feature vectors based thereon. The matching procedure is finding the similarity of duplicate image blocks. Some of the matching algorithms are k-d tree, Sorting, Nearest Neighbour Search, and Hashing. Similar feature vectors or their corresponding coordinates in the image plane. False positives in the matching procedure are pruned in a final error reduction step. The error reduction step is finding the duplicate image region.

Accordingly, digital image forensics has emerged as a new research field that aims to reveal tampering operations in digital images. A common manipulation in tampering with digital images is known as region duplication, where a continuous portion of pixels is copied and pasted to a different location in the same image. To make convincing forgeries, the duplicated regions are often created with geometrical or illumination adjustments. There are various method used in the existing system. DWT (Discrete Wave Transform) used to reduce dimensionality reduction. But it does not find the rotation and scaling. Lexicographic Sorting and Counting Bloom Filters are also used in the existing system. But it cannot find solution of scaling and rotation. It does not remove the noise. The Zernike moment is easy way to find the copy (-rotate-) move forgery. This method is still weak against scaling or the other tempering based on Affine transform. Existing System has the drawback of computational complexity and does not find accuracy of the duplicate image regions.

In recent years, several methods have been proposed to detect region duplication for the purpose of image forensics. These methods are based on finding pixel blocks that are exact copies of each other in an image. Such methods are most effective for the detection of region copy-move, where a region of pixels is pasted without any change to another location in the image. A common form of digital tampering is Copy-Move forgery, in which a part of the image itself is copied and pasted into another part of the same image to conceal an important object. Because the copied part come from the same image, its important properties, such as noise, Shape, color and texture, will be compatible with the rest of the image and thus will be more difficult to distinguish and detect.

In the preprocessing stage the RGB image is converted into grayscale image. Apply SIFT algorithm using to find the keypoints. SIFT Algorithm is used to detect the keypoint localization. Good keypoints and features should represent distinct locations in an image, be efficient to compute and robust to local geometrical distortion, noise, illumination variations and other degradations. Here, present SIFT features detection method to find the duplicate. Specifically, to detect the locations, of potential duplicated regions, we first detect SIFT keypoints in an image. The detected keypoints are matched using hashing algorithm. We can use the matched SIFT keypoints to estimate the affine transform parameters, but the obtained results are inaccurate due to the large number of mismatched keypoints. To find out the unreliable keypoints we use Random Sample Consensus (RANSAC) algorithm then use the Affine transform. Finally detect the duplicate region. 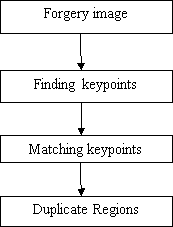 In the preprocessing stage the RGB image is converted into grayscale image. Apply SIFT algorithm for finding the keypoints. SIFT algorithm consist of the following stages:

Good keypoints and features should represent distinct locations in an image, be efficient to compute and robust to local geometrical distortion, illumination variations, noise and other degradations. Here, to present a new region duplication detection methods based on the image SIFT features. Specifically, to detect the locations, of potential duplicated regions, first detect SIFT keypoints in an image. And compute the SIFT features for such keypoints. To ensure the obtained feature vector invariant to rotation and scaling, the size of the neighborhood is determined by the dominant scale of the keypoint, and all gradients within are aligned with the keypoints dominant orientation dominant orientation.

The similar keypoints can be found out using Locality Sensitive Hashing (LSH) technique. Previous year a k-d tree algorithm used to detect the keypoint. This is taken more time search to compute the similar values. Locality Sensitive Hashing easy to detect the similar values. Locality-sensitive hashing(LSH) is a method of performing probabilisticdimension reductionof high-dimensional data. The basic idea is tohashthe input items so that similar items are mapped to the same buckets with high probability (the number of buckets being much smaller than the universe of possible input items). This is different from the conventional hash functions, such as those used incryptographyas in this case the goal is to maximize probability of “collision” of similar items rather than avoid collisions.

RANSAC algorithm used to detect the error. This means SIFT produce the keypoints then Locality Sensitive Hashing used to find the similar keypoints. Locality Sensitive Hashing has the bucket. Each bucket contains the index that index contain the values of keypoints. RANSAC algorithm reduces the error. Instead of RANSAC using the Affine transformation. So it will easily to find out the error of scale, rotation and transformation of copy move forgery detection.

In particular the human eye does not easily find out the copied region. The regions may be scaling or rotation type of manipulations. The goal of copy-move forgery is detecting duplicate image regions. Copy move forgery is difficult to identify the duplicate image region. SIFT is used to detect the keypoints of given image. SIFT is Scale Invariant Feature Transform. So it focused to detect the Scale and transformation. Good keypoints and features should represent distinct locations in an image, be efficient to compute and robust to local geometrical distortion, illumination variations, noise and other degradations. Here, we present a new region duplication detection method based on the image SIFT features. Locality Sensitive Hashing detects the similar keypoints. Finally RANSAC algorithm used to find the duplicate image region.