Biomass gasifiers have found a promising place in renewable energy resource field. Even then, these gasifiers are facing lots of practical difficulties on operational effectiveness due to shortage of man power. So small scale biomass gasifier is fabricate and further the fuel feeding system and switching functions (On/Off Operations) are also changed by means of automation. Bucket conveyors are used to feed the fuel from the reservoir to the pre-storage chamber. The fuel will be fed in equal intervals of time to maintain constant level of fuel in the reactor. The level of the fuel in pre-storage chamber can be checked by means of level sensors. Ignition of the gasifier is also automated using a special ignition set up. All these automations are achieved by using microcontrollers, sensors and limit switches.

Biomass gasifier has evolved in different aspects for more than three decades. Many improvements were made in biomass gasifiers. The rectifications of the flaws found in the gasifiers were sorted out; researched and good results were obtained. Highly efficient biomass gasifiers of different type are in existence at present.

Even then there are many problems to overcome in order to make the biomass gasifier further more efficient.

The main challenging factors to make the biomass gasifiers highly efficient both cost wise & performance wise are as follows, (i)Gasification is quite complex and sensitive process. (ii)Due to the continuous working of the system it requires the repeated refueling. (iii)The removal of residues such as ash and other residues is taking more time.(iv)The formation of producer gas is very easy, but getting the proper state is very difficult.(v)Man power is needed for fueling, igniting and monitoring. Thus resulting in expenditure for safety aspects of human resources, which makes it cost inefficient the system. (vi)Toxicity of producer gas is also a major problem which affects the humans.

A. Automation of the Gasifier Using Microcontroller

Energy systems that rely upon biomass fuel are often very complex due to the need for the systems to integrate fuel handling, combustion control, and ash removal. Automation of biomass gasifier is capable of offering a wide range of solutions to suit these needs. These are achieved by utilizing a variety of PLC and SCADA systems at present [1].

Even though PLC & SCADA finds a promising place in automation of biomass gasifier [1] there were few disadvantages like highly expensive system for being installed in small scale and medium scale gasification unit skilled workers with deep knowledge about these controlling system are needed. Hence this paper mainly focuses on automation of then gasifier from small scale to large scale unit. This can be achieved by automate the gasifiers using microcontroller.

A Microcontroller is a digital computer on a single chip but usually runs for performing a dedicated task. It has CPU, memory, timers, Parallel& Serial I/O and peripherals, counters and clock circuit. The primary operation of a microcontroller is performed by using a fixed program that is stored in the ROM. Because of absence of CPU, RAM, ROM, Peripherals all embedded on a single chip in microprocessor, microcontroller has a greater advantage over it. This in turn reduces the size of the application and cost. It consumes low power because it operates at low frequencies and so it is fit for durable application.

Downdraft gasifier, the upper cylindrical part of gasifier acts as a collection device for wood chips or other biomass fuel [4]. The downdraft gasifier is shown in Fig. 1. Below this cylindrical part of gasifier, there is a radially directed air nozzle that permits air to be drawn in to the raw material, so they become gasified. Before the pyrolyzing of biomass it contacts with atmospheric air, char and support a flame. It rapidly consumes limited air supply for getting richer flame in the pyrolysis zone. At the final stage of pyrolysis zone, the gases consist mostly of C­o, H2o, Co2 and CH4 [5]. The throat ensures that the gaseous products pass through the hottest zone where most of the tar cracked into gaseous hydrocarbon. Thus produces relatively clean gas.

A. Components of gasifier:

The purpose of a hopper is to store the biomass for continuous feed to reaction chamber. It is mounted above the reactor of gasifier. The fuel storage hopper is made up of 4mm thick mild steel. The diameter and height of fuel hopper is chosen to be 220mm and 550mm respectively [2]. Round shaped hopper has been chosen to prevent the problem of biomass being stuck.

This is the main component of gasifier. The main reaction of gasification like oxidation, reduction and distillation takes place in this zone. It is in the shape of vertical convergent and divergent nozzle (from top to bottom direction) and made by 3mm thick mild steel. Upper diameter of divergent section is 100mm and the lower diameter is of 220mm with 100mm height respectively [2].

A cylinder is made to cover the whole gasification assembly. The height and diameter of cylinder are 220mm and 250mm respectively [2].

B. Components of automated gasifier:

The components of automated gasifier and their design are described below.

A pre storage chamber is made to store the fuel after the fuel bunker and before the combustion chamber. The height and diameter of cylinder are 200mm and 300mm respectively. 500mm length door frame is placed on the top of cylinder, same

500mm length door frame placed on the bottom of the cylinder. And 250mm outer diameter and 220mm inner diameter flange. 8 holes of 10mm diameter are drilled in the plates to join the hopper and pre-storage chamber with the help of nut and bolts.

In order to assemble the gasifier components, first of all water tank is placed on the stand and the gasifier is placed inside the tank. Now the pre-storage chamber is placed to top of the hopper and join with the help of nut and bolts. And the fuel bunker with conveyor is placed on the stand one end of the conveyor is fixed inside of the fuel bunker and another side of the conveyor is fixed on the top of the pre-storage tank with help of bolts and nuts. The schematic of automated gasifier unit is shown in fig. 1. 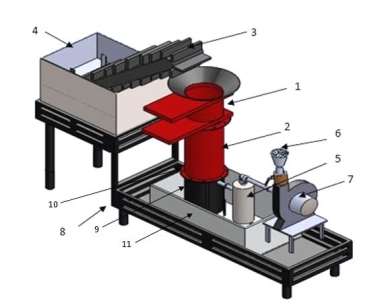 IR proximity sensor is act as a level sensor. The level of the fuel in pre-storage chamber can be checked by means of level sensors. It can able to sense the nearby objects without any disturbance of the sensed object. It does not have any mechanical parts and also lack of direct contact between sensed object and sensor. So it has high durability and high reliability.

Motor is used to drive the conveyor system and door open close operations. These are controlled by microcontroller kit.

Limit switch is a device which converts mechanical motion in to electric signal. It is operated by physical contact of the object. In this system limit switches are used to control the door open close system. 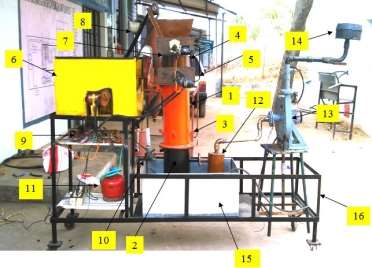 If the fuel level comes down in the hopper

Step 2: press the press button to start the process.

Step 4: conveyor on fuel is taken from fuel bunker to pre-storage chamber.

Step 6: After these door 1will be close.

Step 7: And then door 2 open. The fuel comes from pre-storage chamber to hopper.

Step 9: repeat from step 1 to step 6 another one time for filling the hopper (this repeating process is adjustable in the program. it depends upon the fuel).

Step 10: After this process air blower will be on (for creating pressure in the gasification zone).

Step 11: After 1min igniter will be on (using automatic igniter).

The continuous process will happen for every equal interval. The time interval is adjustable (before start the whole process to set the time interval depends up on the fuel characteristics).

Step 2: conveyor on fuel is taken from fuel banker to pre-storage chamber.

Step 3: if the fuel will be attain maximum level in pre storage. The conveyor system will be cut off.

Thus the small scale biomass gasifier was designed and fabricated with automatic controls. This gasifier is initiated with the manual feeding of biomass in the Fuel bunker, set the equal time interval for feeding from fuel bunker to pre-storage chamber and press the push button to start process there after the entire process like fuel feeding system, ignition system, switching functions (On/Off Operations), equal interval of feeding was automated using microcontroller, sensors, limit switches and motors. In future to develop the gasifier in fully automatic mode, to controlling and monitoring the gasifier parameters like temperature, pressure, air flow rate and gas flow rate etc. And also implement this automation in large scale gasfiers.