Route discovery and data transmission in Mobile Ad-Hoc networks (MANETs) are the key procedures which influence the performance of the network. The data transmission through the discovered route with in minimum delay is considered as a major problem in the MANET. Hence this paper proposed an approach called Multipath Switching Zone Traversal (MSZT) approach to minimize average delay. In this approach, the broadcast has been converged to two zones after the initial broadcasting in order to minimize the broadcast delay. Based on the data size and the Time to Live (TTL), the data transmission is initiated via multipath or single path. Game theory approach (GTA) is a powerful mathematical tool for analyzing the strategic communications among several decision makers. Hence this paper utilizes the GTA for switching the path between inter-zonal and intra-zonal nodes for different source data to provide a successful data transmission. The simulation results show that the approach is efficient in terms of delay, packet delivery ratio, and localization error when compared to the existing approaches.

A multi-hop wireless Ad hoc network (MANET) is composed of mobile nodes, which can communicate without any aid of centralized Infrastructure (T.Durga , 2015) The demand of different multimedia applications such as surveillance system and video on demand service over MANET has been increasing rapidly in recent years. However, it is not easy to support the data transmission according to the end-to-end delay requirements over MANETs. A number of routing protocols have been proposed for Ad hoc mobile networks to improve the QoS ((K.S.Dinesh , 2014).

Most of the routing protocols use the minimum hop numbers as a metric of route cost while taking routing decisions. However they ignore the some important link capacity properties because of simplicity and ease of implementation. Each node in the network may have different traffic load and hence, nodes which have more active neighbors may experience more collisions (Rakesh Kumar, et, al., 2010). Uncertainly some of the over loaded nodes may fall on the minimum hop route, it may considerably introduce a longer delay, even though the number of nodes in the chosen route is minimum. In addition, if some of the over loaded nodes are congested; it may result in huge packet drop rates and consequent retransmission. This may increase the end – to – end delay between two end points.

Thus in this paper Multipath Switching Zone Traversal (MSZT) routing approach has been proposed in order to reduce average delay. The approach reduces the number of broadcast after the initial broadcast in the network. Multipath data transmission is enabled based on the TTL and the data size. The game theory approach is used to switch the path between inter-zonal and intra-zonal nodes for different source data, which is a powerful mathematical tool. The path switching while during the data transmission provides a successful data transmission by checking the path availability. Thus this approach enhance the QoS demanded MANET applications

(Saad M. Adam, et, al., 2013) presents an reactive routing protocols overview in terms of QoS requirements in MANET. Due to the requirements has been fulfilled for the commercial, real-time, and multimedia applications in MANET. The delay has been considered as one of the important QoS metric to satisfy the application requirements.

The delay optimization approach has been presented by the authors (Syed Jalal Ahmad, et, al., 2015) for multimedia application in MANET. The Knapsack algorithm is used for buffer management to maximize and minimize the in order and out order packets simultaneously. The buffer internals are exploited and the adjusting the buffer usage dynamically makes the node to transmit the packet in the preferred order to its successive nodes. The simulation results show that the approach transmits multimedia data packet without loss and in minimum delay.

(K. Sasikala,et, al., 2014) proposed the finite state machine for queue and transmission management mechanism to minimize the packet delay time in MANET. Information about the delay for each data flow in the queue is maintained in a node. A timer is fixed to each flow in a node and it has been updated dynamically. Based on the nodes characteristics the queue is controlled to minimize the packet delay.

(Obaidat, M, et, al., 2011) proposes a multipath routing protocol for MANETs. The protocol establishes the route, which having the lowest delays relied upon the communication of various layers. The performance of the protocol is compared with the AODV and AOMDV.

(V. R. Budyal and S. S. Manvi, 2013) presents a clever agent based on-demand QoS routing methodology in MANET. The intelligent agent utilizes the neuro-fuzzy logic aided by Q-learning. The DSR protocol has been enhanced to discover all the multiple paths and the condition of the path from source to destination. The fuzzy membership function has been optimized by the software agents and if then rules are made to take decision in the system.

A cross layer design is made for delay concerned Node Disjoint Multipath AODV in Ad Hoc Network by the author (GawasMahadev A, et,al., 2014). The channel and link information has been obtained by applying the cross layer design between the MAC and routing layer. The path status has been updated subsequently by concerning the lowest delay attained at each intermediate node. The protocol is compared with the AODV and NMDR and it perform better than the other two in terms of routing overhead and packet delivery ratio.

The Multipath Switching Zone traversal routing approach is proposed in this paper to minimize the average delay in the network. The approach is implemented after the initial broadcast from the source. The MSZT is composed of two parts such as route discovery and path switching.

Before the data transmission via the shortest path, the Expected Transmission Time (ETT) and the TTL value has to be estimated to enable multipath through the different zones in order of increasing the packet delivery factor (PDF).

Expected Transmission Time (ETT) is the time taken for transmitting a data packet successfully to the destination. The ETT is estimated based on the data size of a packet.

Here ETX is the expected transmission count i.e. expected number of transmissions that a node needs to transmit a packet successfully to a neighbor. The ETX can be estimated as follows

The maximum Time to Live (TTL) is a timer data part in the IP header which specifies RREQ packet life time before it is discarded (Cheng-Yuan Ho,et, al., 2007). All the RREQ fields in its route cache have been maintained in order to find the route minimum Time to Live (TTL) value after TTL time expires and the information about the TTL is available in the RREP packet.

3.2 Path Switching Algorithm based on the Game theory Approach

Game theory is a mathematical tool for analyzing and estimating how a person behaves in strategic situations. The game is composed of three fundamental components: a set of players, a set of strategies, and a set of payoffs. Nodes (players) are the decision takers in the game. The strategies are the various options available to nodes such as (TTL, node availability) (Badr Benmammar, Francine Krief, 2014). At last the utility function (payoffs) make a choice of all possible outcomes for each player. The components of the proposed game theory approach are given in the table 1.

After each transmission, the next hop zonal node must update the path availability (zone availability) to its predecessor node. The competition is between the multiple paths available between the source nodes to the destination node. After each successful data transmission the payoff is considered such as the availability and the TTL in order to stay on the same path otherwise path is switched to the next highest probability value of the available path.

Figure 1 Path switching algorithm based on the game theory approach

Broadcasting is the fundamental process where the probe transmission from the source to all other forwarding nodes to arrive at the destination. The broadcast delay is the difference between the packet receiving time (prt) by destination and the packet transmitted time (ptt) from the source node.

Localization error (LE) is accounted as a one of the performance metric in the scattered network and it yields the LE of a node.

Where EMax is the maximum LE

Packet delivery factor is defined as the ratio of the number of packet arrived at the destinations to those transmitted data packets by the source. 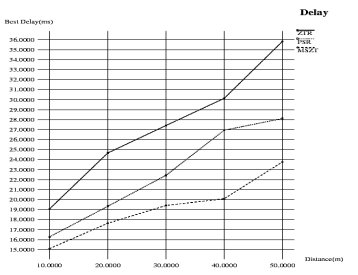 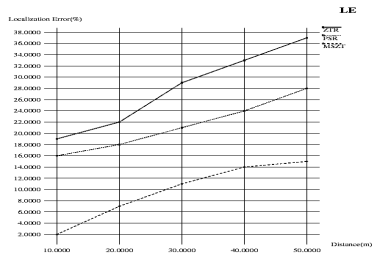 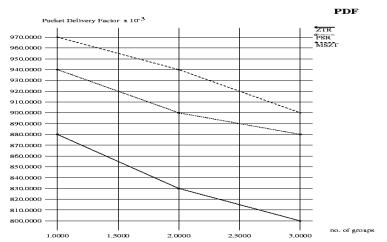