Abstract. Ultrasound images are inherently affected by speckle noise, and thus the reduction of this noise is a crucial pre-processing step for their successful interpretation. Bayesian estimation is a powerful signal estimation technique used for speckle noise removal in images. In the Bayesian-based despeckling schemes, the choice of suitable statistical models and the development of a shrinkage function for estimation of the noise-free signal are the major concerns. In this paper, a novel curvelet-based Bayesian estimation scheme for despeckling of ultrasound images is developed. The curvelet coefficients of the multiplicative degradation model of the noisy ultrasound image are additively decomposed into noise-free and signal-dependent noise components. The Cauchy and two-sided exponential distributions are assumed to be statistical models for the noise-free and signal-dependent noise components of the observed curvelet coefficients, respectively, and an efficient low-complexity realization of the Bayesian estimator is proposed. The experimental results demonstrate the validity of the proposed despeckling scheme in providing a significant suppression of the speckle noise and simultaneously preserving the image details.

Ultrasound imaging is important for medical diagnosis and has the advantages of cost effectiveness, port-ability, acceptability and safety [1]. However, ultrasound images are of relatively poor quality due to its contamination by the speckle noise, which considerably degrades the image quality and leads to a negative impact on the diagnostic task. Thus, reducing speckle noise while preserving anatomic information is necessary to better delineate the regions of interest in the ultrasound images.

In the work of speckle suppression in ultrasound images, many spatial-based techniques that employ either single-scale or multi-scale filtering have been developed in the literature [2-4]. Earlydeveloped single-scale spatial filtering [2] are limited in their capability for significantly reducing the speckle noise. More promising spatial single-scale techniques such as those using bilateral filtering [4] and nonlocal filtering [3] have been recently proposed.

This work was supported in part by the Natural Sciences and Engineering Research Council (NSERC) of Canada and in part by the Regroupement Strategique en Microelectronique du Quebec (ReSMiQ).

These techniques depend on the size of the filter window, and hence, for a satisfactory speckle suppression, they require large computational time. Alternatively, multi-scale spatial techniques [5], based on partial differential equations, have been investigated in the literature. These techniques are iterative and can produce smooth images with preserved edges. However, important structural details are unfortunately degraded during the iteration process. As an appropriate alternative to spatial-based speckle suppression in ultrasound images, many other despeckling techniques based on different transform domains, such as the ones of wavelet, contourlet, and curvelet, have been recently proposed in the literature [6-8]. Wavelet transform has a good reputation as a tool for noise reduction but has the drawback of poor directionality, which makes its usage limited in many applications. Using contourlet transform provides an improved noise reduction performance due to its property of fi‚exible directional decomposability. However, curvelet transform offers a higher directional sensitivity than that of contourlet transform and is more efficient in representing the curve-like details in images.

For the development of despeckling techniques based on transform domains, thresholding [7] has been presented as a technique to build linear estimators of the noise-free signal coefficients. However, the main drawback of this thresholding technique is in the difficulty of determining a suitable threshold value. To circumvent this problem, non-linear estimators [6] have been statistically developed based on Bayesian estimation formalism. For the development of an efficient Bayesian-based despeckling scheme, the choice of a suitable probability distribution to model the transform domain coefficients is a major concern. Also, while investigating a suitable statistical model, the complexity of the Bayesian estimation process should be taken into consideration. Consequently, special attention should be paid to the realization complexity of the Bayesian estimator that results from employing the selected probabilistic model in one of the Bayesian frameworks.

In this paper, to achieve a satisfactory performance for despeckling of ultrasound images at a lower computational effort, a new curvelet-based Bayesian scheme is proposed. The multiplicative degradation model representing an observed ultrasound image is decomposed into an additive model consisting of noise-free and signal-dependent noise components. Two-sided exponential distribution is used as a prior statistical model for the curvelet coefficients of the signal-dependant noise. This model, along with the Cauchy distribution is used to develop a low-complexity Bayesian estimator. The performance of the proposed Bayesian despeckling scheme is evaluated on both syntheticallyspeckled and real ultrasound images, and the results are compared to that of some other existing despeckling schemes.

The multiplicative degradation model of a speckle-corrupted ultrasound image g(i,j) in the spatial domain is given by

where v(i,j) and s(i,j) denote the noise-free image and the speckle noise, respectively. This model of the noisy observation of v(i,j) can be additively decomposed as a noise-free signal component and a signal-dependant noise:

where (s(i,j) âˆ’1)v(i,j) represents the signal-dependant noise. Taking the curvelet transform of (2) at level l, we have

where y[l,d](i,j), x[l,d](i,j) and n[l,d](i,j) denote, respectively, the (i,j)th curvelet coefficient of the observed image, the corresponding noise free image and the corresponding additive signal-dependant noise at direction d= 1,2,3,Â·Â·Â·,D. In order to simplify the notation, we will henceforth drop both the superscripts land dand the index (i,j).

where Î³is the dispersion parameter. The noisy observation is used to estimate the Cauchy distribution parameter Î³by minimizing the function

In (6), MAD denotes the median absolute deviation operation. Now, in order to formulate the Bayesian estimator, a prior statistical assumption for the curvelet coefficients of nof the signal dependant noise should also be assumed. From experimental observation, it is noticed that the tail part of the empirical distribution of ndecays at a low rate. Hence, in this paper, we propose to use a two-sided exponential (TSE) distribution given by

where Î²is a positive real constant referred to as the scale parameter. The method of log-cummulants (MoLC) is adopted to estimate the parameter Î², and thus the estimated Î²Ëœ is obtained by using the following expression:

Due to the fact that each of the Cauchy and TSE distributions has only one parameter, one could expect the process of Bayesian estimation to be of lower complexity. The values of the Bayes estimates xË† of the noise-free curvelet coefficients xof a subband under the quadratic loss function, which minimizes the mean square error (MSE), are given by the shrinkage function:

It is noted that a closed-form expression for

xË†(y) given by the above equation does not exist.

Thus, in order to obtain the Bayesian estimates for the noise-free curvelet coefficients, the two integrations associated with (9) are numerically performed for each curvelet coefficient. Since this procedure requires an excessive computational effort, the bayseian estimates are obtained by replacing the associated integrals in (9) with infinite series as suggested in [10]. Accordingly, the Bayesian shrinkage function can be expressed as

In the equations above, j= âˆšâˆ’1, Im{Â·}and Re{Â·}are the imaginary and real parts, respectively, of a complex argument, and E1(Â·), Si(Â·) and Ci(Â·) are, respectively, the exponential, sine and cosine integral functions obtained as in [10].

The peak signal-to-noise ratio (PSNR) is used as a quantitative measure to assess the despeckling performance of the various schemes when applied on synthetically-speckled images. Table I gives the PSNR values obtained when applying the various schemes on two synthetically-speckled images of size 512Ã-512, namely, Lenaand Boat. It is obviously seen from this table that, in all cases, the proposed despeckling scheme provides higher values of PSNR compared to that provided by the other schemes. To have a better insight on the despeckling performance of the various schemes, the results in Table 1 are visualized in Figure 1. It is obvious from this figure that the superiority of the proposed scheme over the other schemes is more evident when a higher level of speckle noise is introduced to the test images. In order to study the performances of the various despeckling schemes on real ultrasound images, two images obtained from [12] and shown in Figure 2 are used. Since the noise-free images cannot be made available, one can only give a subjective evaluation of the performance of the various despeckling schemes. From Figure 2, it is clearly seen that the schemes in [2] and [6] provide despeckled images that suffer from the presence of visually noticeable speckle noise. On the other hand, the scheme in [7] severely over-smooth the noisy images thus providing despeckled images in which some of the texture details are lost. However, the proposed despeckling scheme results in images with not only a significant reduction in the speckle noise but also a good preservation of the textures of the original images.

Table 1: The PSNR values obtained when applying the various despeckling schemes on Lenaand 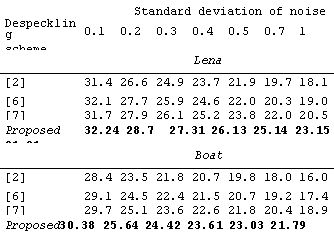 Fig. 1: Quantitative comparison between the various despeckling schemes in terms of PSNR values:

In this paper, a new curvelet-based scheme for suppressing the speckle noise in ultrasound images has been developed in the framework of Bayesian estimation. The observed ultrasound image is first additively decomposed into noise-free and signal-dependant noise components. The Cauchy and twosided exponential distributions have been used as probabilistic models for the curvelet coefficients of the noise-free and signal-dependant noise components, respectively, of the ultrasound image. The proposed probabilistic models of the curvelet coefficients of an observed ultrasound image has been employed to formulate a Bayesian shrinkage function in order to obtain the estimates of the noise-free curvelet coefficients. A low-complexity realization of this shrinkage function has been employed. Experiments have been carried out on both synthetically-speckled and real ultrasound images in order to demonstrate the performance of the proposed despeckling scheme. In comparison with some other existing despeckling schemes, the results have shown that the proposed scheme provides higher PSNR values and gives well-despeckled images with better diagnostic details. 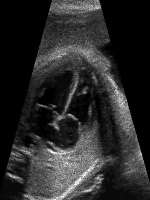 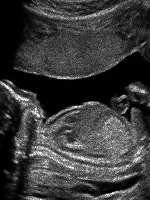 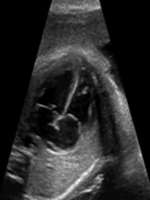 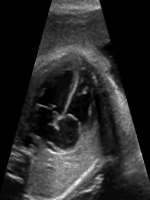 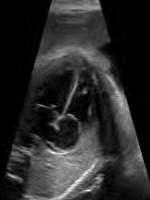 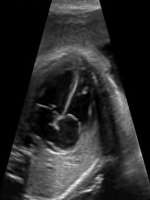 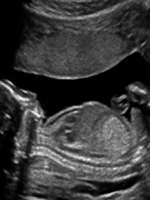 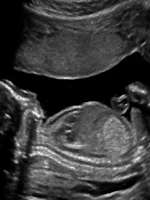 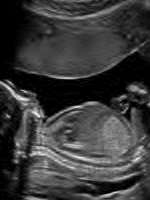 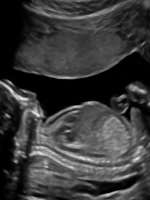