Abstract: Memristor a two terminal passive non volatile device is considered as the fourth circuit element and can be used in many applications which includes memory, logic and neuromorphic systems. The memristor provides many advantages like scalability, compatibility with CMOS and offers no leakage current. Various models of memristor have been discussed in this paper. The main focus is on the Current-Voltage (IV) relation of different models and its simulation is done in Cadence Virtuoso.

In 1971, L. O. Chua introduced the fourth passive circuit element named memristor which is two terminal non volatile device with a property of variable resistance known as memristance [1]. The memristance provides the relation in the time integrals of voltage and current. Originally, current controlled time invariant memristor is expressed as

Since HP labs proclaimed the physical working model of memristor [2], it opens the doors to the new type of electronics. Some of the applications includes logic design [3] [4], memory [5], neuromorphic systems [6].

Different models of memristor have been deigned. Formally designed models does not contain threshold [2] [7] [8] (i.e. resistance changes for any current or voltage). The Threshold Adaptive Memristor model (TEAM )[9] and Voltage Threshold Adaptive Memristor model (VTEAM) [10] models exhibits the threshold current and threshold voltage respectively, are the most efficient models and less computational complexity.

This is the first and basic model of memristor proposed by HP Labs [3]. This model has width which is splitted in two regions as shown in Figure 1. The region with width w is doped with positive oxygen ions (originally TiO2) and has low resistance therefore is more conductive and other side is undoped. Each region is modeled with resistor (in series). Various assumptions are considered i.e. ohmic conductance, uniform field and average ion mobility.

The IV relationship curve of linear ion drift model of memristor for sinusoidal input is shown in figure 2. 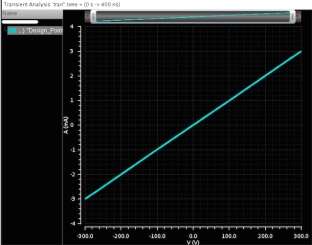 Although the linear ion drift model of memristor is simple and satisfies the basic memristor equations. But as per the experiments of the fabricated device, it behaves differently i.e. it is highly non linear [11] [12]. The non linearity is desirable for logic circuits, therefore another memristor model have been proposed based on experimental results concluded in [11]. A model is [13] proposed. The relation between current and voltage for this model is

are known as fitting parameters and parameter n describes the influence of state variable (w) on the currents. . Here, the state variable w is normalized within the interval [0,1]. The model shows asymmetric switching behavior, in a way that during the ON state, w is near one and the first term of, is the dominant part of the current, which is a tunneling phenomenon. During the OFF state, w is near zero and the second term, has the dominant part of the current, which is similar to an ideal diode equation. The state variable differential equation is written as

where a, m are constants, f(w) is the window function and m is an odd integer. And there is a nonlinear dependency on voltage.

The IV characteristics of this model is shown in figure 3. 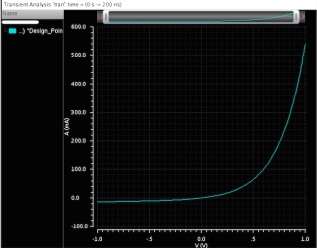 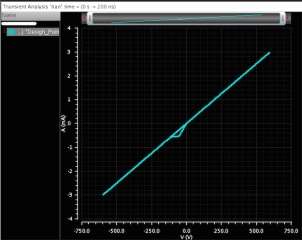 Another model having more accuracy than previous discussed model was proposed in [14]. The assumptions of this new model includes non-linearity and asymmetric switching behavior because of an exponential dependency of movement of ionized dopants i.e. changes in state variable. Physical model of this type has a resistor in series with electron tunnel barrier. The simmons tunnel barrier width x, is the state variable. So the derivative of x can be represented as oxygen vacancy drift velocity, and is:

where b, con, coff, ion, ioff, aon, aoff are known as fitting parameters. Con is always greater than coff and they both effect the magnitude of change of x. The parameters ioff and ion define the current threshold. Another parameter aoff and aon gives the upper and lower bounds of x respectively. Within the range defined, the derivative of state variable x, is significantly smaller than state variable itself. Therefore, there is no need of window function that is the biggest advantage of this model.

According to the simmons tunnel model, the relation between voltage and current can be expressed as:

Where V is applied voltage and v is internal voltage of the device (it is not necessary that both voltages are equal [15] ).

Based on the fitting parameters, the IV characteristics curve of the simmons tunnel barrier model is shown in figure 4.

Before 2013, it was claimed that Simmons Tunnel Barrier model is the most accurate memristor model but it too has some limitations of complication, unexplicit relation in voltage and current and is not in general. Therefore a model with accuracy and simpler expressions is the main demand.

The TEAM ( Threshold Adaptive Memristor model) is proposed by Shahar Kvatinsky [16]. This is simple and general model, physically similar to predefined model. Some assumptions can be made for analysis and for computational efficiency.

Based on assumptions, state variable derivative of this model is expressed as

where aon,aoff, kon,and koff are constants (koff is positive and kon is negative). foff(x) and fon (x) are the window functions, depends on state variable x.

by assuming the current voltage relation is same as memristance of memristor which changes linearly in x. Therefore,

where λ is the fitting parameter. The parameter Ron and Roff are resistances at bound and satisfies

By tuning different parameters of the model, the VI curve of this model is showm in figure11.

According to [9], it is claimed that the accuracy of TEAM model is more enough having mean error of 0.2%.

where koff, kon αoff and αon are constants. Parameters voff and von are threshold voltages. The window functions fon and foff defines the dependency of state variable derivative on state variable w.

where woff and won gives bounds of state variable w.

The curve for the IV relation of VTEAM memristor model is depicted as in figure 6. 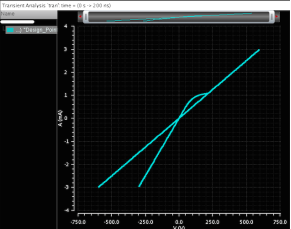 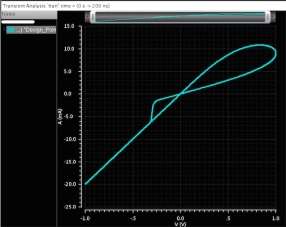 Comparison of different models of memristor is listed in table1.

The VI characteristics of each model is implemented by using verilogA code [18] because of its effiency regarding computational time than SPICE model.