Pros of SOAP over REST

Cons of SOAP over REST

Service-Oriented Architecture is a concept aims to improve flexibility by organizing and utilizing nodes of a network [1]. SOA enables the realization of business functionalities by allowing interactions between service providers and service consumers [2]. SOA turn application functions into services which can be consume by other applications over a network. A service describes the business function, self-contained and developed independently. It is defined by a verb, for example: validate user [3]. Services are simply a collection of service with independent methods.

Resource-oriented architecture is based on the concept of resource. It involves retrieving particular resource instance and it has operations for resource lifecycle management that is to create, read, update and delete resource. Requests are stateless, one request has no connection with the next one. Resources are identified by some address and data included within the request [4].

A web service is a node of a network accessible interface to application functionalities that is a set of specifications to support interoperable machine-to-machine interaction [2] [5]. The protocol and the format that are used for specific services are defined in those specifications.

Figure 1 shows a basic web service where communication is done between two machines with different operation systems (Windows and Linux) and built with different programming language (Perl and Java).

SOAP originally Simple Object Access Protocol, is a set of rules for transferring organised information by the use of web services. SOAP uses XML based for transferring of information in a distributed computing style. SOAP is independent of transport protocol that is it can use any transport protocol for example HTTP, FTP, TCP, UDP, etc. [6]. SOAP has been developed by Microsoft to replace older technologies like CORBA and DCOM

SOAP has an RPC architecture, all web service are message-oriented as HTTP itself is message-oriented, SOAP uses a second envelope inside the HTTP one, that contains XML data which is a description of a RPC call similarly as XML-RPC. This is how SOAP is used to call a remote function or what the return value from a function.

Soap message contains data, the action to perform, the headers and the error details in the case of failure [6]. It uses interfaces and named operations to expose the business logic. It makes use of WSDL to describe the services for client to use and UUDI to advertise their existence [6].

Representational State Transfer is a set of software architectural style for distributed computing system like the World Wide Web. REST is not a protocol. The REST term originated by Roy Fielding in his doctoral dissertation. Roy Fielding is one of the main author of the HTTP protocol specification. The REST term has quickly come in practise in the network community [7]. REST tries to fix the problems with SOAP and provides a truly method of using web services [8]. REST do not require to add another messaging layer to make the transfer to message as oppose to SOAP, REST transfer its message in the HTTP request. It concretes on design rules for making stateless services.

Request and response are built by the transfer of representational of resources. A resource can be essentially the data (object) that may be addressed [6]. Rest recognizes everything as a resource (e.g. User). Each resource has a standard uniform interface, usually an HTTP interface, resources have a name and addresses (URIs). Each resource serves a unique resource since each URL are unique. The different types of operations that can be performed on the resource are done by the different HTTP operations also known as HTTP verbs which are GET, PUT, POST and DELETE. Each resource has one or more representation (JSON, XML, CSV, text, etc.) and the resource representations are transferred across the network [6]. REST allows the creation of ROA but it can be used for both ROA and SOA [3].

A RESTful web service is the implementation of REST principles.

Enterprise security features are provided by the WS-Security standards. It supports identity through intermediaries, also provides the implementation of data integrity and data privacy [9].

Provides reliable messaging that is a successful/retry process built in and provides reliability through soap intermediaries [6]. REST don’t have such feature therefore it should deal with failures by retrying the request.

ACID transactions over a service, REST is not ACID compliant. [9]

The Web Service Description Language is used to describe SOAP interface in XML format. A client can read the file and know exactly which methods it can call and the signatures of the methods. The client can discover services automatically and generate useable client proxy from the WSDL. Most SOAP web services would be very cumbersome to use without it. The WSDL is a machine-readable file that is an application can parse it and knows how to make a service call.

When a service method is called, a POST request is made to the endpoint of the SOAP service which is a single URL for all API call and only POST requests can be made. The signature details are found in the WSDL document.

WSDL version 2 caters for HTTP verbs and it can be useful for documenting RESTful system but it will still very verbose [6].

By replacing XML document with a remote call, there will be a great performance improvement if both sides of the application uses the same binary logic [10].

XML is mainly used by most web services for request and response messages but a growing number of web services are using simple data structures (such as numbers, array) serialized as JSON-formatted strings. JSON is expected to be used by a JavaScript call; it is much easier to get a JavaScript data structure from JSON than from XML document. Web browsers don’t have a standard JavaScript interface for XML parser as every browser has a different interface for treating XML document. JSON is normally just a string with some constraints with JavaScript so we can say that JSON string is interoperable on all web browsers. JSON is not attached to JavaScript but an alternative data serialisation to XML. JSON is a simple language-independent method of formatting complex data structures (e.g. array, object, etc.) as string. [11]

Pros of SOAP over REST

Cons of SOAP over REST

A comparison of web services protocol, styles in 2006 and in 2011 from more than 2000 web services are shown below. It clearly demonstrate that most developers have moved from SOAP to REST. The interest in REST is growing very rapidly whose those in SOAP is declining [16]. 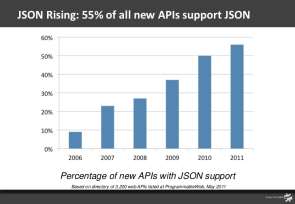 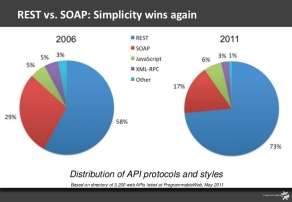 Figure 2: Comparison of web services usage in 2006 and in 2011 Figure 3: Web service with JSON support 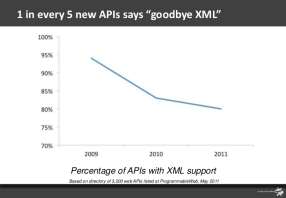 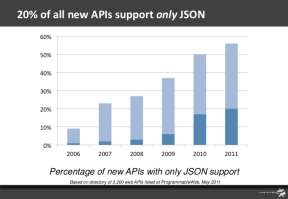 Amazon has SOAP and REST based web services and around 85% of their usage is from the REST-based web service [17]. Although all the beautiful name with SOAP, it is an evidence that developers like the simpler one, that is the REST one [18].

Google has deprecated its SOAP services in favour of a RESTful, resource –oriented service [11]

Nelson Minar, used SOAP-based web service to design Google API for Google search and AdWord, he stated to be wrong for choosing SOAP [15].

SOAP is more useful for complex web service or when there is critical data involve such as banking transaction where retrying the same request can be very critical. If one need a web service up-and-running quickly, it is better to start with REST rather than SOAP. REST is a good option for web service which are meant to be simple, lightweight and fast. However after using one of the web service, it can be almost impossible to change it to the other one. It would be cheaper to re-build the web service.

When making your decision on which type of web service to use, the decision should be which one best meets the requirements with the chosen programming language and in which environment it will be used.

Even though SOAP is meant to be flexible to change, add new features, expanding it. It is not the case in practise by the use of strongly-type as it can make existing client to stop working just by changing the type of method signature.