In this chapter, we list the comparison on computation cost of the cloud for file upload between … and our scheme.

Data access issues in the field of the cloud computing provide a good measurement-based performance as mentioned along this research, and hence, the security features can be improved using the new proposed model as well as a suitable computational cost. However, the proposed protocol provides these advantages and evaluates the performance based on computational cost and security requirements.

The performance of our proposed scheme is evaluated using the existing experimental in [33] [34] [35] for a variety of cryptographic operations using MIRACLE [36] in PIV 3 GHZ processor with Windows XP operating system and 512 MB memory. From [33] [34] [35] the relative running time for the operations we adopted in our proposed scheme and we define some terms for the running time calculations:

The following tables illustrates the performance efficiency based on running time which is focus on user side including data owner:

The following table shows comparison between [37] [38] and our scheme in the major process which is file upload/download, with file in any size (not affected) and for one user:

From the above tables we clearly can observe that our proposed model is more efficient and has low running time indeed. The following figure can simplify this comparison: 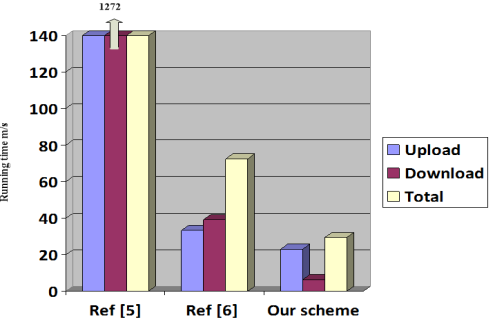 In the security aspects of our proposed model, we can notice that this model can achieve AC, FR, DC, IG, security requirements. Furthermore, this model not only provide a cost-based efficient scheme, but also provide a high secure and robust model against attacks such as Anti-collusion, Replay, MITM, and DoS attacks as follows:

Anti-collusion attack   Some unauthorized users or members whose attributes do not satisfy the access policy, they may also try to access the data by colluding together with other users or even the service provider to compromise some data owner’s privacy. Our scheme is considered it to be secure against this attack due when a user is revoked, the group manager updates the revocation list (RL) stored in the cloud with a new. In addition, the group manager adds a time stamp to the data files and signs, to make sure that the cloud updates the data files.

Replay attack Replay attacks are network attacks in which the attacker spies the conversation between the sender and receiver and takes the authenticated information e.g. sharing key and then contact to the receiver with that key. Moreover, our scheme is considered it to be secure against this attack due to temporary session by using timestamp for encrypted data.

Man-in-the-Middle Attack (MITM) Man-in-the-middle attack has become quite popular in the SaaS environment. Here the attacker intercepts the communication channel established between legitimate users and modifies the communication between client and server without their knowledge. Moreover, our scheme is considered it to be secure against this attack due to encrypted identities and the hash function used in the term of key generation:

Denial of Service Attack (DOS): Most of the serious attacks in cloud computing.  In  Denial  of  service  attack  an  attacker  prevent  legitimate  users  of  service  from  using  the desired resources by flood a network or by consuming bandwidth .So authentication is need to distinguish legitimated  clients  from  malicious  clients,  which  can  be  performed  through  strong  cryptographic verification. Moreover, our scheme is considered it to be secure against this attack due to the client creates a unique HMAC, or hash, per request to the cloud by combing the request data and hashing that data, along with his id and sending it as part of a request. The cloud receives the request and regenerates its own unique HMAC. The cloud compares the two HMACs, and, if they’re equal, the client is trusted and the request is executed.

√   means the scheme can achieve the corresponding goal.

In general and from the above comparisons, our scheme can achieve data confidentiality, secure   access control, integrity and   flexible revocation.  For clearly seeing the advantages of security of our proposed scheme, as explain in table 3, we list a table compared with ref [38], ref [39] and ref [40].