Abstract— The purpose of this study is to develop tools which could help the clinicians in the primary care hospitals with the early diagnosis of breast cancer diagnosis. Breast cancer is one of the leading forms of cancer in developing countries and often gets detected at the lateral stages. The detection of cancer at later stages results not only in pain and agony to the patients but also puts lot of financial burden on the caregivers. In this work, we are presenting the preliminary results of the project code named BCDM (Breast Cancer Diagnosis using Machine Learning) developed using Matlab. The algorithm developed in this work is based on adaptive resonance theory. (Explain the results of this work here ……..). The aim of the project is to eventually run the algorithm on a cloud computer and a clinician at a primary healthcare can use the system for the early diagnosis of the patients using web based interface from anywhere in the world.

In order to achieve the exactness Adaptive Resonance theory that is one of the variants of Neural Network been used for prediction purposes. Neural Network gained importance in 50’5 till late 60’s due to its accuracy and learning capabilities but got diminished in 80’s due to its computational cost. With the advancement in technology (4) Neural Networks are becoming popular due to their ability to achieve “non-linear hypotheses” even when input feature scale is large (4). This work proposes to use a variant of neural networks based on adaptive resonance theory to improve the breast cancer diagnosis. This algorithm has been developed and tested in Matlab 2012.has been tested on lot of real life problems that include automated automobile control, for classification purposes and for the detection of intruders in the battlefield.

The Adaptive Resonance Theory (ART) is a neural network architecture that generates suitable weights (parameter) by clustering the pattern space. . The motive for adapting ART instead of a conventional neural network is to solve the stability and plasticity problem. (5) ART networks and algorithms keep the plasticity to learn new patterns and prevent the amendment of patterns that it learned earlier.

The stable network will not return the previous cluster. The operation of ART works as it accepts an input vector and classifies it into one of the clusters depending on to which cluster it resembles. If it will not match with any of the category then a new category is created by storing that pattern. When a store pattern is, bring into being that matches the input vector within a specified tolerance that made it to look like the input vector. The pattern will not be modified if it doesn’t match the current input pattern within the vigilance parameter. With the help of it the problems associated with stability and plasticity can be resolved. (5) 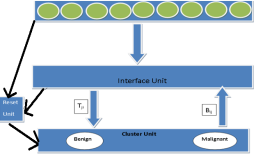 A. Types of Adaptive Resonance Theory

It is the first neural network of Adaptive Resonance theory. It consists of two layers that cluster the pattern from the input binary vector. It accepts the input in the form of binary values (6).

It is the second type of neural Network of Adaptive Resonance theory .It is complex than that of ART1 network and accepts the values in the form of continuous valued vector. The reason of complexity for ART 2 is that it possesses the normalization combination and noise inhibition alongside it compares the weights needed for the reset mechanism. (6)

B. Working of ART 1 Neural Network

The art Neural Networks works in the following fashion, which comprises of three layers and each layer has its own role to play.

The parameters used in algorithm are as:

All then odds are inhibited thus cannot be clustered

The data set for this research was taken from Mangasarian and Wolberg. This data set was obtained by taking Fine Needle Aspirates (FNA) approach. (7) This data set is available for public in UCI repository. (7) It contains 699 samples of patient’s consists of two classes 458 as benign cases and 451 malignant cases.

The following are the attributes of the database:

We have taken this data in its original form. This dataset is available in UC Irvine Machine Learning Repository (7)

Our Experiment consists of four different modules which is further divided and does work in the following sequence as given in the figure 5 below. 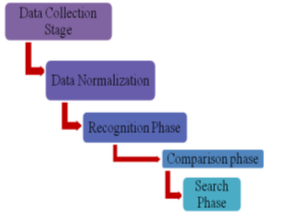 Figure 5: Modules of the Algorithm

A. Modules of the Experiment

In our dataset, not all the features are taking part in the classification process thus; we remove patient’s id feature. Then we left with ten attributes so we separate the feature set from the class values as Xij and Yi.

After preprocessing stage Normalization of Xij (nine feature vectors) need to perform by using this equation:

The new values (New_val) after getting from the previous step are truncated and converted into binary format. Then grouping was done on the base of range; the values falling in the range of 0 to 5 assigned as ‘0’. Whereas, values in the range from ‘5’ to ’10’ are assigned as 1.Then each sample as an input is given to ART1 network for training and testing purpose.

Initially all components of the input vector were assigned to zero because no sample was applied to the input layer. This sets the other two layers to zero there by disabling all the neurons and results in zero output. Since all neurons are at the same stage, thus every neuron has an equal chance to win. The input vector then applied in the recognition layer, at each neuron performs a dot product between the input vector and its weight vector. A neuron that comes with the greatest dot product possesses the weights that most excellent matches input vector. It inhibits all the other outputs from that neuron from that layer. This indicates the recognition layer stores the patterns in the form of weights associated with neurons one for each class.

The classification process finishes if the reset signal is not generated. Otherwise other patterns were researched to find the correct match. This method continues until either all the stored pattern has been tried or all recognition neurons are inhibited.

The performance of the Algorithm studied is as under:

The Training percentage and testing percentage total time taken and the relative efficiency when vigilance parameter is 0.5 is given by the chart. 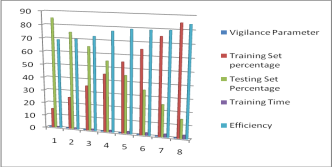 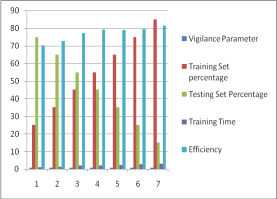 Figure 7: The Classification performance on Epoch 0.7 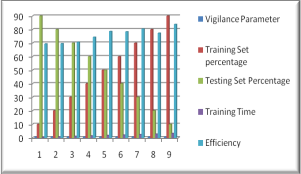 Figure 8: Calculation of Efficiency on different proportion of data

The efficiency of the Network with vigilance parameter 0.9 on different percentage of training and testing sets given as under:

Figure 9 : The Efficiency of the Network on Vigilance Parameter 0.9

The Maximum and Minimum time for training the Network on different tolerance factors is in the table as:

In this paper, we evaluated the adaptive resonance theory for the diagnosis of breast cancer using Wisconsin as data set. Several tests has been taken on different proportion of training and testing dataset and we concluded that by taking the vigilance parameter as 0.5 and taking the ratio of data as 90% for training and 10 % for testing we could achieve the better results.

Although we have taken into account all the parameters in the further scope of research, we use the feature selection process so that we can reduce the time and improve the accuracy. In addition to that, we take the dataset from the local hospital so that we use that for the benefit of the society.