Data processing can be shown by data flow models. At the early stage of examination, these models are used to show data processing in existing system. This data flow model consists of various notations which denotes functional processing, passing of data between two functions and storing data at some level. Data flow models are the step by step representation of data flow in sequence. Transformation of data takes place at each step in model while entering to next step. This transformation or processing steps are functions defined for particular activity or program. In this program functions data flow diagrams (DFDs) define software design. There are number data flow diagrams modeling rules are followed such as: 1) there should be in and out of data flow is compulsory for all processes. 2) Incoming Data is modified by all processes and they should produce transformed new outgoing data 3) data store must be involved with one data flow module. 4) One of the data flow must involve one external entity. 5) data flow should have minimum one process attached to it .

In data flow diagrams’ data flow in the system is represented by graphical view. This graphical view can be used to represents any information or processing criteria in development of system. First step towards creation of overall system is shown by DFD which can later expand. DFDs show data processing in each function. Data flow diagrams provides information about what should be input for each module and expected output after processing as well as how the data will enter and how it is passed and where it is stored. DFDs are just used to show information flow in the system. They won’t show time required to complete the process or how processing can be done whether serially or parallel.

A physical data flow diagram (physical DFD) represents actual implementation of the system at the present DFD and required DFD can be designed as per future demands. Hence physical DFD can be designed in both forms in current position and one can build on future demands by customers. Physical DFDs describes set of data items included on each paper circulated in office and they describe truth about unique set of paper pieces that are stored together in filling cabinet. As it shows all information about data in all forms thus there is possibility of inclusion of references towards data that are redundant or copied the storage of data is implemented as tables that could be normalized or de-normalized relational database. Logical DFD work opposite to physical DFD in such a way that it tries to capture data flow aspects in system that is not copied or have redundancy.

Context level data flow diagrams can be drawn practisizing it. They show interaction between external entities and system that are considered as data source and data sink. That could be helpful in drawing context diagrams. How this system interacts to external agents is designed naturally in terms of data flow between system boundaries. The context diagram denotes whole system as a single process and does not provide any information to internal organization.

These context level diagrams are expanded next to generate level 1 flow diagram that represents small detailed information about the system to be modeled. Level 1 system represents ts of sub systems from which system is built that each process consists of more than one data flows which goes to external entity or comes from it and considering theses processes together forms one single system. Data stored from each module should be in order to perform its job and this defines the actual data moving from different parts of system. DFDs are important part of structured systems analysis and it is SSADM method. These diagrams provide information of system evolution in simple word to the sponsor person or end user. DFDs provide information about operation of system will complete its task and implementation details about system.

DFDs of old system can be compared with new proposed system to see the output and can be used for development of system with updates. A data flow diagram provides idea to end user about the change in systems output after giving data input at modules. System development can be shown through DFD model.

There are different levels of data flow diagrams and designer should show partition of system into sub systems, also the data flow between each module. In SDLC for analysis and design step DFDs are used. Data flow diagrams can be drawn by using various notations (Yourdon & Coad, Gane&Sarson), that shows data stores, data flow, processes, and external agents. 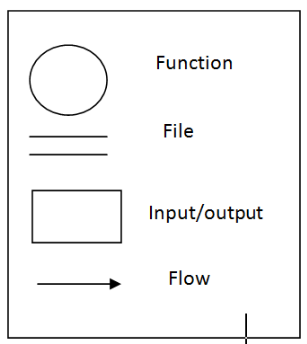 In the above figure 4.1 the notations used for showing data flow diagrams have shown. It indicated the control flow of project modules from starting to end. The following figures show each modules data flow diagram. As modules include: 1) Area grid generator 2) Random population initialize 3) Applying algorithm. 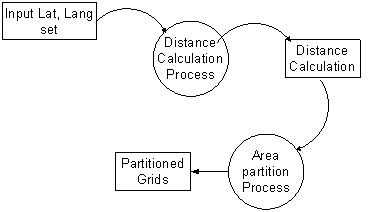 As shown in the above fig 4.2 data flow diagram input values are passed that are latitude and longitude of each point so that one area is selected. After that this transformation of data can takes place in the form of distance calculation. Hence the output will be calculated distance is divided into smaller grids. 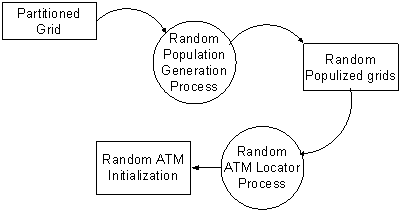 A data flow diagram defines the data flow from one module to another module this can be illustrated in this system as shown in above fig 4.3. In this DFD the input comes from area grid generator in the partitioned form of area grid. In this module main function is to generate random population for each smaller grid. After the population generation for each grid random ATM machine is located. 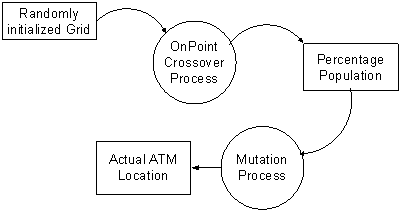 In the fig 4.4 DFD input taken from random population initializer module and one point crossover and mutation operation can be applied on them , once the fitness evaluation based on percentage of population is done. 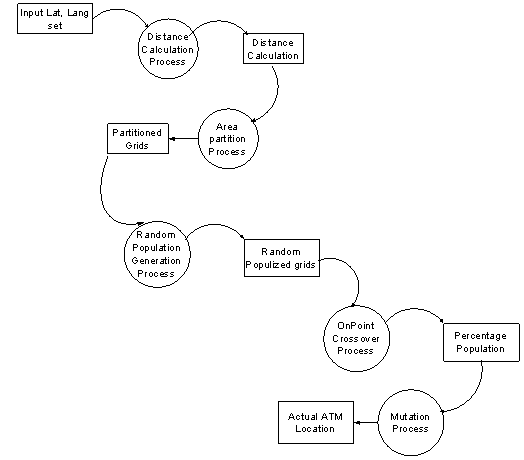 Sequence diagram is a chart of sequence of message. They are called as interaction diagrams as they provide information about inter-process operation in order. Here object interactions are time specific. One scenario is built from objects and classes. The messages are exchanged sequentially between objects for performing particular task in the scenario. They are called as event scenarios or event diagrams because they are arranged in time sequence. Sequence diagrams consist of use case realizations built from logical of system which is under implementation.

In sequence diagrams various processes or objects that are running parallel are shown by vertical lines also called as lifelines and messages exchange is denoted by horizontal arrows, in orderly fashion based on time. This can be shown in terms of graphical view. If the vertical line is object it shows a role. It is compulsory to denote instance name, if it is blank it will consider it as anonymous or unnamed instance. Messages with horizontal arrows with message name on top of arrow show interaction. Synchronous calls represented by solid arrow, asynchronous messages are denoted with open arrow and reply message with dashed lines. If a sender sends message is synchronous then it must wait until message completes and invoke a subroutine. In asynchronous direct response is generated. Such kind of direct response with asynchronous message is seen in multithreaded applications and also implemented in message oriented middleware.

Processes that are performed after response to message are shown with activation boxes or method call boxes. They are present on top of vertical lines and are opaque rectangle. New activation boxes are shown if it indicates next level of processing and objects invoking functions on themselves use messages. Objects destroyed are shown with X on top of vertical lines and dashed lines are ceased drawn below.

Following fig 4.5 shows sequence diagram of ATM deployment in terms of client server activity. Here Clients are user. Clients has to select initial area for study, hence first step is to enter the latitude and longitude of each location from which area is build from i.e. top, bottom, left and right corners of area. This data is stored in database and it is shown at server side for further operation. After this selection process this area is represented in terms of grids for studying smaller part of the area.

For this purpose this grid is partitioned into sub grids. Now for this selected area subparts random initialization population can be done and randomly ATM machines are placed. After evaluating the percentage of population of each grid, and applying algorithm for taking more accurate points, for highly dense areas ATM is placed. 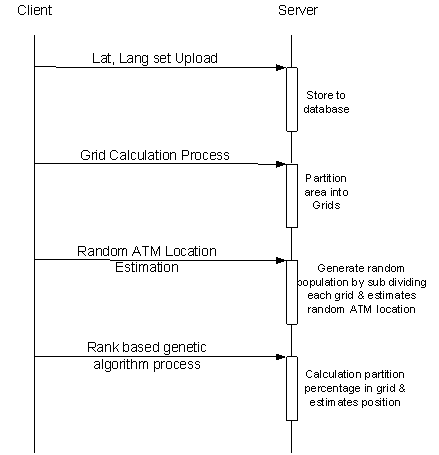 UML (use case diagrams) diagrams are type of behavioral diagrams designed and defined by Use case analysis. It provides graphical representation of functionality of system in terms actors, they are use cases and use case dependencies. The goal of use case diagram is to show role of each actor and these roles are depicted. Actors and authentication server are two actors. The interaction of user with system is done with use cases by forming topology, transmission range is selected and source and sink also selected. Actors are a person, organization or it can be an external agent/system that plays a role in system interactions.

Sequence of actions providing information about actor is described with use case and graphically shown with horizontal ellipse. Following figures shows use case diagrams for ATM deployment. 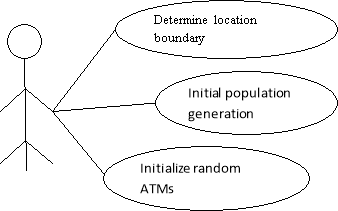 Fig. 4.7 Use case diagram for Initialization 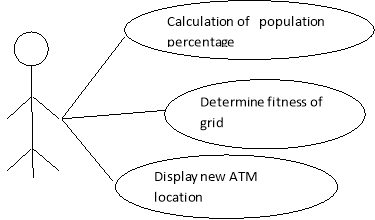 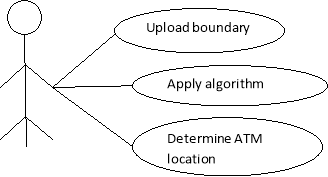