Abstract– To encourage cleanliness drive by using technology to promote proper use and maintenance of trash cans by providing location specific details using a GPS and feedback about garbage disposal facilities and a step forward for “Swacch Bharat Abhiyan”.

All around the globe, the world is taking a note of India’s economic growth. However, we must acknowledge, if there is any aspect in which India or Indians have not moved forward – or moved very sluggishly, – is in the field of environmental cleanliness and taking care of the surroundings.

If we look around, trash and litter is everywhere. Nobody seems to care about the waste, and how we discard it. If anything, we add to the garbage that is already abundant in the open and is everywhere. Littering a plastic cup on the road-side, after we done using it, is the norm. No one realize anything wrong with it. Throwing our waste on the street, and right outside our own house is a part of the daily routines.

Unhygienic conditions are one of the major root cause of diseases / illness. Any disease or illness has financial impact both in terms of expenditure and potential revenue earning. Swachh Bharat Mission, which is our ultimate aim, will have positive impact on India’s health care sector As per estimates, inadequate sanitation cost India almost $54 billion or 6.4% of the country’s GDP in 2006. Over 70% of this economic impact or about $38.5 billion was health-related, with diarrhea followed by acute lower respiratory infections accounting for 12% of the health-related impacts. Evidence suggests that all water and sanitation improvements are cost-beneficial in all developing world subregions. Moreover, India is a land of cultural heritage and rich history. Tourism generate approximately 6.6% of India’s GDP and 39.5 Million Indians are directly employed in this sector. Tourism can generate employment for up to 5% of India’s population i.e. 62.5 Million people. It has potential to generate 23 Million additional job opportunities or 2.3 Cr people will get job. I have taken 5% employment fig which is very conservative after studying tourism model of countries which focus on tourism. The biggest limitation for India to promote tourism is cleanliness. Foreign tourists are very particular about hygiene and cleanliness. Besides employment, Tourism will help bring foreign money to India which will boost India’s GDP. A clean India will help in generating employment through Tourism and boost India’s GDP.

We can make all the progress, we can make all the economic strides alongside the rich nations, but we can only go so far if we are surrounded by the smelly dirt piles and garbage. Financial and economic breakthroughs are good. However, along the way, what we really need is a change in our mentality to care for our environment, to care for our own surroundings. And, we need to realize this at personal level, sooner than later.

This project uses Global Positioning System (GPS) or the Provider-based location services of a device to determine the current position of the user so that the user can mark a place on the map as not clean. This will be forwarded to the authorities and so that the particular marker can be removed from the map after the area has been cleaned. Another part of this project is that a user can check the location of the closest dustbins on map from his position in case he/she has something to throw away. This feature promotes cleanliness and puts a break on littering.

Following are the existing systems which are similar to the specifications of our project :

B. Drawback of current System

Application takes the help of Global Positioning System or Provider based location service in correctly detecting the current location of the user so that he/she can mark the area unclean and submit his/her complaint. After the successful submission of the complaint, same is being forwarded to authorities. Authorities can remove the marker after clearing the area. Another feature of the application is to locate the nearest trashcans if user wants to dispose any waste. In this way littering can be controlled to some extend and this also encourages every citizen to contribute little towards better India. 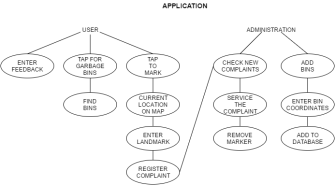 The swim lane diagram shows the two lanes of the proposed system which are the user and the administrator. The user is responsible for marking of unclean areas on the map. The proposed system also helps the user to find nearby bins to dispose something which the user wants and thus restricting the problem of littering in the country. The user may also fill up a feedback form about the complaint registered and also may file grievance complaint if the complaint has not been serviced properly and within the particular boundary of time.

The second lane in the swim-lane diagram is the administrator who is responsible for servicing of complaints as well as addition of new bin coordinates to the database of available bins.

The advantages of the proposed system are: 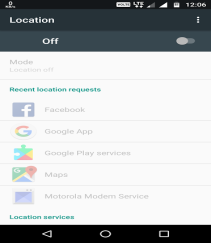 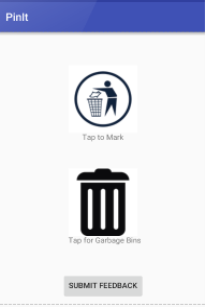 Fig (3) Launch activity of the application 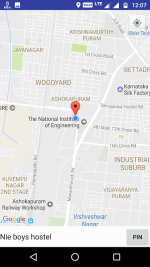 Fig (4) Getting the location coordinates of the user

4. Once the user clicks on the button captioned as “Tap for garbage bins”, shown in Fig(3) the user will be redirected to this to this activity[Fig (6)] which will load a Google Map in which the user needs to click the location enabled button on the right top corner of the activity. The code which implements the location listener interface will get the current location coordinates of the user by reading the GPS of the user’s device. When the user clicks the button named as “FIND”, the application will look into an online database and find the nearest bin coordinates from the database and show them on the map using a modified marker which will show a bin in place of a default Google map marker. The user can click on a dustbin marker according to his/her route and use the Google’s inbuilt navigation features to find the nearest route to the dustbin. The user can also toggle between different views such as Map view, satellite view etc. 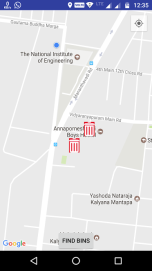 Fig (6) Getting locations of the nearest bins

5. When the user clicks on the “submit feedback” button on the first activity [Fig (3)] of the application this activity will be shown. The activity will prompt the browser on the user’s device to load a hardcoded link which will contain the feedback form. The feedback form will contain fields such as contact number, complaint ID, a few relevant questions with options which the user is required to fill the correct responses for. The unique complaint id and contact number pair is used as a verification procedure so that not anyone can fill up random feedback forms and only the unique user who filed the complaint is allowed to fill the feedback. After answering all the questions using the options provided the user can also add comment or suggestions with a predefined character limit. The feedback submitted by the user will be used to increase the quality of the services offered. 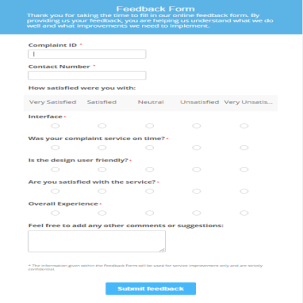 Fig (7) Snapshot of the feedback form 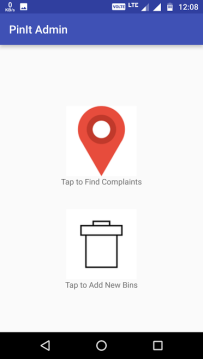 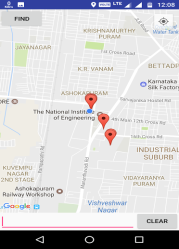 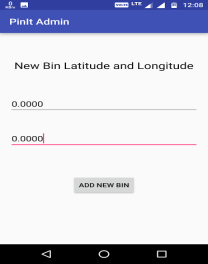