LDPC codes gained importance since its re-discovery by Mackay and Neil based on Tanner Graph. This paper presents the implementation of forward error correction soft-input, soft-output decoding process that efficiently decodes the received set of data under low signal-to-noise ratios due to which the errors are reduced and hence transmission time is greatly reduced. The implemented algorithm is less complex and does not require knowledge of signal-to-noise-ratio of the received data-path.

Error correction coding techniques came into existence after existence of channel capacity theorem by Shannon, the father of information theory in 1948 on reliable communication over noisy transmission channels. Thereafter, many coding techniques were developed for efficient coding techniques, like Hamming, Golay and many other techniques were developed. Though Gallagher in 1962 developed LDPC codes, the method employed was not optimal. Hence it was not reviewed for last 3 decades, until 1992, when a paper “Near Shannon limit error correcting coding and decoding: turbo codes” presented by Berrou, Glavieux and Thitimajshima changed the trend followed by researchers for the past 5 decades. And now, we are aiming to develop such codes through another strategy. The coding gain provided by this method is much higher when compared to other coding systems. The LDPC codes are becoming more popular because of their reduced power for transmission and less complex logic to achieve low BER’s which is very essential for reliable transmission over noisy channels.

The Encoder produces a Code-word which satisfy the condition

If R is the received data from the Transmitter then the acknowledgement of the correct data received is given by the Syndrome(S).

Since this property is very useful to reduce the calculation time if we receive the data correctly as soon as we receive data. The probability that the received data needs to be retransmitted which in the range of 10-6 to 10-8.

The receiver does not know C and E; its function is to decode C from R, and the message D from C.

The base for LDPC decoding algorithm proposed is as described by MacKay and Neil in 1997.

Following are the steps that briefly describe the algorithm

Let rj be the received vector, i.e. the data received from the Gaussian channel

The tables required for calculations are computed using the above formula. The complexity is greatly reduced and the reliability of the transmission of signal is increased.

The LUT entries used in the proposed algorithm for equation (3) and the exact value obtained will vary as shown in the figure. 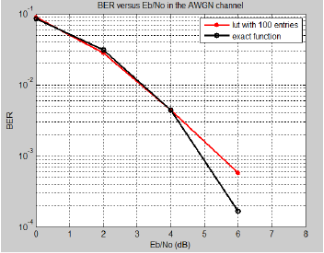 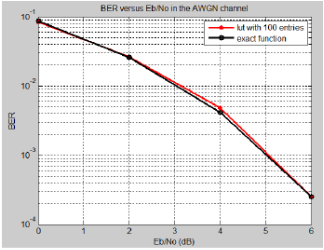 As explained above, for higher precision the number of iterations is increased to obtain the same performance of the exact equation.

In this paper we have described Low Density Parity Check (LDPC) codes and decoding of these codes using low complexity algorithms. LDPC codes are used now-a-days in communication systems that take advantage of parallelism, good error correction and high through put. This led to the new algorithm which could decode the errors and yet give similar BER performance as the complex algorithms without the knowledge of the channel noise parameters like variance. This new algorithm is based on repeated use of an antilog-sum operation, and has been simulated on the Tanner graph representation of several LDPC codes and this algorithm can be regarded as a generalized form of belief propagation, where the belief propagated is Euclidean distance estimate rather than a probability estimate. The advantages of the new algorithm are that the performance is as good as the complex algorithm provided the value of base of the logarithm is used properly; that knowledge of noise is not required and that in the simplified form the algorithm needs only additions/subtractions, comparisons and two look-up tables avoiding the use of quotients and products operations that are of high complexity in practical implementations especially using FPGA technology.