Figure 4.0 illustrate the demographic data of this research. Samples for this research consist of students of Bachelor of Applied Language Studies (Hons.) Malay Language for Professional Communication, also known as LG221 and LG241 of MARA University of Technology (UiTM), Shah Alam. Participants are at the ranging of 20 to 24 years old. The total numbers of participants are 50 students consisting of 27 male and 23 female. 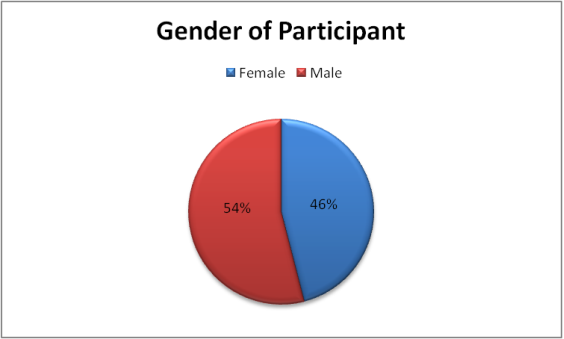 To determine the underlying factors behind both male and female students public speaking anxiety, factor analysis was accomplished on the of the 34 item in the PRPSA questionnaires. All 34 items are then characterized onto six different factors that are related to making public speaking. These six factors are as followed:

Out of 34 items in PRPSA, 12 items are put into the first factor which was labelled positive speaking perception (Factor 1). Items loading on this factor pertained to the positive feeling a person has during the preparation and actual speech presentation. Students with this kind of attitude tend to have little or no problem when giving a speech.

Besides that, six items are put into the second factor which was labelled emotional effect of speech anxiety (Factor 2). Items loading on this factor pertained to the supposed emotional consequences a person feels during the preparation of the speech, as well as when asked to give a speech.

The third factor is labelled physical effects of speech anxiety (Factor 3) with six items loaded into it that pertained to the supposed physical consequences a person feels during the preparation of the speech.

The fourth factor is labelled lack of preparation (Factor 4) and is loaded with three items from PRPSA. These three items pertained to the perceived consequences of insufficient speech preparation.

Meanwhile, the fifth factor is labelled vulnerability (Factor 5) with four items put into it. Items loading on this factor pertained to the perceived feeling of helplessness during the preparation of the speech.

Lastly, the sixth factor is labelled perfectionist (Factor 6) with three items from the PRPSA that pertained to the supposed consequences of being perfectionist.

Within these six factors of the PRPSA that has been characterized, the factor Emotional effects of speech anxiety scored the highest with a mean of 3.52. Although the result is moderate, it still shows that most students tend to have public speaking anxiety because they have a sense of nervousness together with uneasiness when giving a speech and this can negatively affect students’ speech by making them seem unsure about what they are saying.

The next factor resulting in students’ public speaking anxiety is Perfectionist with a mean of 3.13. Students who are considered themselves perfectionists tend to have a tendency to set standards that are so high that they either cannot be met, or are only met with great difficulty. Perfectionists tend to believe that anything short of perfection is horrible, and that even minor imperfections will lead to catastrophe.

This is followed by the third factor which is Vulnerability. Factor vulnerability scored a mean of 3.13. This factor shows that students think about an upcoming encounter negatively and may intensify feelings of anticipatory anxiety associated with the encounter. Besides that, speakers’ will also have depressive thoughts about their speech and this may contribute to public speaking anxiety before, during, and after a speech performance which lead to them believing they will not succeed when giving a speech.

Factor Lack of preparation is found to be factor number four with a mean of 2.93. The level of preparation determines the level of students’ success in giving speeches. Most students hardly prepare enough for their speeches. This is often because they do not start their preparation early as to why they resort to a last minute approach, which then lead to them feeling unprepared and unready for a speech.

The final factor that leads to students having public speaking anxiety is Physical effects of speech anxiety with a mean of 2.89. Speech anxiety can overwhelm the senses, the thoughts, as well as the body. Some of the common symptoms of speech anxiety include shaking, sweating, butterflies in the stomach, dry mouth, rapid heartbeat, and squeaky voice.

The first factor which is Positive perceptions towards speech anxiety is not an underlying factor to students’ public speaking anxiety. This factor is actually the opposite of it. Positive perceptions towards speech anxiety factor scored a mean of 3.34. This proves that students’ public speaking anxiety is not that serious. However these students need improvement as it is hinted that students are still not that keen towards the importance of English speech proficiencies. More importantly, it is known that the students still felt uncomfortable and unsure of their own potentials and that that they are still not capable of handling themselves during speeches.

On the other hand, to determine whether there is a difference in public speaking anxiety between male and female student, the mean value for PRPSA of each gender is distinguished. Results are as shown in Table 4.1.

The above table revealed that although both male and female students fell in the moderate level of PRPSA, female students tend to have a higher public speaking anxiety level as their mean value is bigger as compared to the male students.

On Figure 4.1, it can be seen on which aspects students, whether male or female, face their difficulties when giving a speech. This figure is based on the factors that have been deducted from PRPSA. 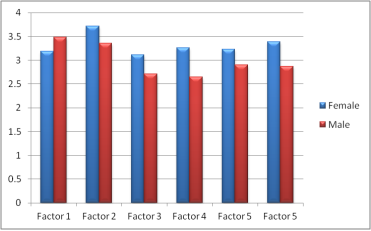 “I am in constant fear of forgetting what I prepared to say.”

From the statement above, 28 out of 50 students agreed to it with 16 of them being male students. It can be concluded that male students experienced more anxiety compared to male respondents in terms of forgetting to say things they know even though the result is quite similar.

“During an important speech I experience a feeling of helplessness building up inside me.”

For the gender differences in public speaking anxiety, it can be indicated that both male and female students are equally anxious when involve in giving speeches although the male students show less significant anxiety as compared to the female students.

Correlation between Public Speaking Anxiety and Fear of Negative Feedback

In order to determine the correlation between two variables and they are students’ public speaking anxiety together with their fears of negative feedback, Karl Pearson’s Correlation Coefficient method is being used.

The mathematical formula for computing r is:

n = number of pairs of scores

∑xy = sum of the product of paired scores

∑x = sum of the x scores

∑y = sum of the y scores

The strength and significance of the coefficient.

Results for the relationship between public speaking anxiety and fear of negative feedback were displayed in a graphical representation Figure 4.2. From the table 4.2, it can be seen that the result showed a weak correlation between the students’ public speaking anxiety and their fear of negative evaluation as it only scored 0.256. This proves that the relationship between two variables is weak and not very significant. 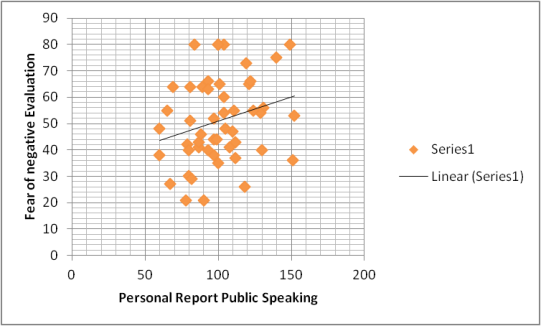 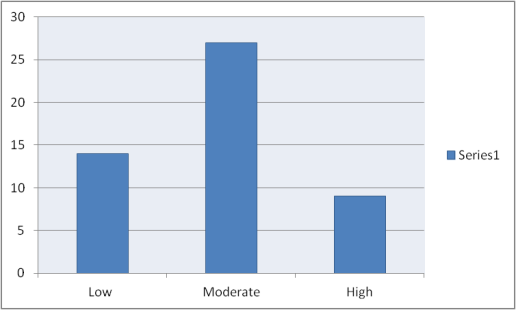 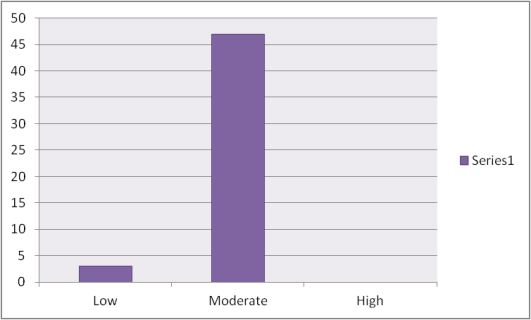