Routing protocol is the key for the quality of modern communication network. EIGRP, OSPF and RIP are the dynamic routing protocols being used in the practical networks to propagate network topology information to the neighboring routers. There have been a large number of static and dynamic routing protocols available but choice of the right protocol for routing is dependent on many parameters critical being network convergence time, scalability, memory and CPU requirements, security and bandwidth requirement etc.

This Assignment uses OPNET simulation tool to analyze the performance of RIP and EIGRP commonly used in IP network.

Initially We have Following Network. 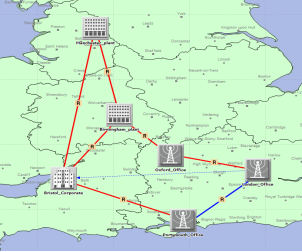 By Examining the Network we figure out that Red line indicating the Data Rate of 44.736 Mbps between network components and only Network connection between London Office and Portsmouth office has Data Rate of 64 Kbps.

Routing Information Protocol (RIP) is a distance vector dynamic routing protocol that employs the hop count as a routing metric. RIP is implemented on top of the User Datagram Protocol (UDP) as its transport protocol. It is assigned the reserved port number 520. RIP prevents routing loops by implementing a limit on the number of hops allowed in a path from the source to a destination. The maximum number of permitted hops is 15. Hence a hop count of 16 is considered an infinite distance. This hop number limits the size of networks that RIP may support. RIP selects paths that have the smallest hop counts. However, the path may be the slowest in the network. RIP is simple and efficient in small networks.

For path selection we get following result with RIP protocol

RIP is distance vector routing protocols, announces its routes in an unsynchronized and unacknowledged manner. This can lead to convergence problems. The graph is showing the time taken for routing convergence of RIP. The convergence time is high 6.975 sec that’s mean routers are finding it difficult to exchange state information. 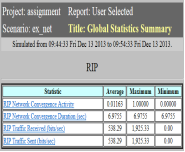 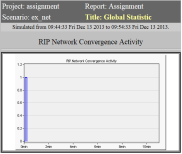 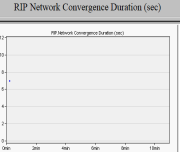 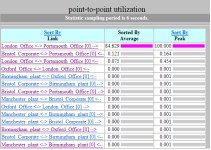 (the distance) and an interface (the vector) , RIP protocols evaluate the best path based on

distance, which can be measured in terms of hops or a combination of metrics calculated to represent a distance value. In this exercise RIP selects London to Portsmouth link and maximum utilization occurs .

The utilisation and convergence data suggests there is some queuing and blocking on the link. For example, the utilisation for the London to Portsmouth link is high i.e 84.629 therefore suggesting the link is suffering from over-utilisation. 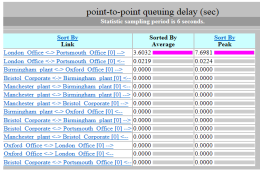 In the point to point queuing graph , the London to Portsmouth Link contains queuing delay on average 3.6032 sec , therefore suggesting there is traffic blocking or queuing on the link.

Enhanced Interior Gateway Routing Protocol (EIGRP) is a Cisco proprietary routing protocol. It is based on a new route calculation algorithm called the Diffusing Update Algorithm (DUAL). It has features of both distance vector and link state protocols. EIGRP metrics are based on reliability, MTU, delay, load, and bandwidth. Delay and bandwidth are the 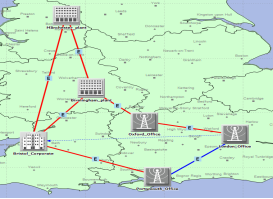 For path selection we get following result with EIGRP protocol 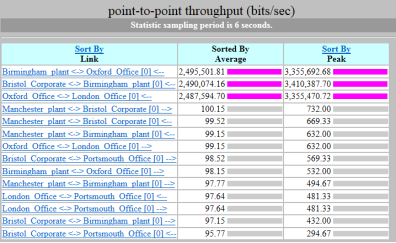 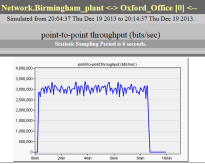 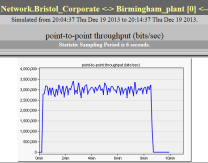 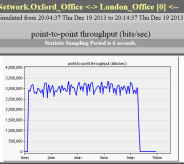 EIGRP is more efficient as compared to RIP , Graphs are showing the convergence duration very fast 0.0074427 Sec as Compared to RIP which was 6.975 Sec with same scenario. 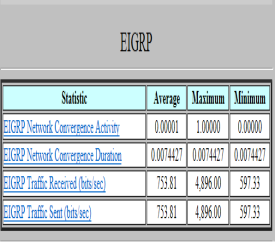 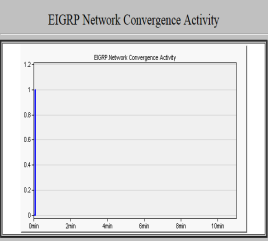 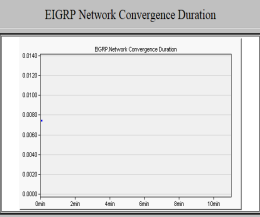 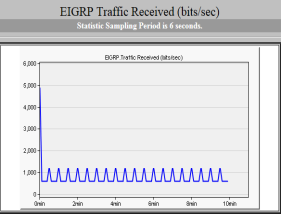 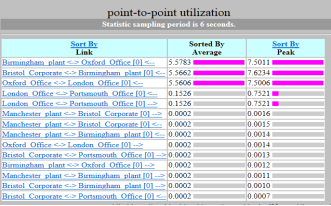 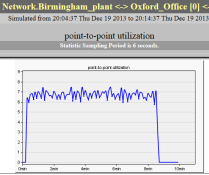 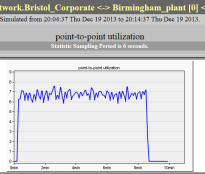 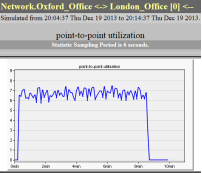 As Compared to RIP , No over utilisation occurs in EIGRP , Utilisation graphs shown above clearly that the utilisation distributed evenly over path with value for the London to Oxford is 5.5606 , Oxford to Birmingham is 5.5783 and Birmingham to Bristol is 5.5662

EIGRP has the characteristics of both distance vector and link state protocols, has improved network convergence, reduced routing protocol traffic, and less CPU and RAM utilization compared to RIP protocol.

EIGRP has very low usage of network resources during normal operation since only hello packets are transmitted. When a routing table changes, its convergence time is short and it reduces bandwidth utilization

We introduced a link Failure Scenario between Bristol corporate and Porstmouth Office after 100 Seconds and its recovery at 200 Seconds and run the RIP and EIGRP protocol over network.

In the RIP protocol the link failure after 100 sec prevented the traffic to flow; therefore when the link recovered after 200 sec a huge amount of traffic was bottlenecked on the link causing the utilisation of the London to Portsmouth to suddenly increase. Also it can be observed that during the time of the failure the RIP protocol began to reroute the traffic over the London to Oxford, Oxford to Birmingham, and Birmingham to Bristol links before the link recovered the graph is showing this small utilization on the links.

In the EIGRP Protocol, link failure event did not affect the utilisation of the EIGRP protocol because the link was not used in the routing path; The EIGRP did not use the link Portsmouth to Bristol in its path selection, so the performance of the network will be barely affected by the failure ; hence the utilisation values doesn’t change

In RIP The Convergence Duration becomes much higher as compare to old scenario before Failure , it was 6.975 before and 19.409 now , this is because routers updates their routing tables when failure occurred and recovered it takes more time period ,

In Contrast with EIGRP protocol the Convergence Duration becomes 0.012273 , much less than RIP this is because EIGRP only update the link failure routing table not the whole network , So EIGRP provides much efficient and faster way to achieve convergence.

Consider the given Network merging with another network, Picture shown below the merging Network 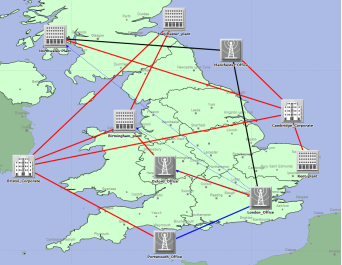 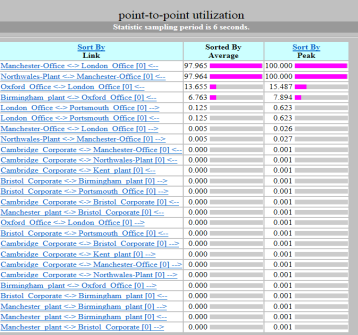 Both are approximately 97 % utilisation which is overutilization and cause serious problems to the network.

With this Observation , we come to know that one possible solution is using EIGRP protocol , as EIGRP protocol solve the over utilisation problem from our network.

The EIGRP protocol solves the Over utilization problem we have faced in RIP protocol and the resultant graph and comparison is showing this clearly with evenly distributed utilization over selected path by EIGRP.