Management tasks in most of the datacentre's is usually done over the same network that is serving production traffic. Hence, when there is a network outage in the data centre, along with production impact, servers and other network devices cannot be reached remotely and hence, physical presence in the datacentre is required. In this document, we shall propose an alternate theory to this problem. We can create an inexpensive management network among servers within the DC to handle management workloads using the existing power cabling. This needs to be noted that this network will not be serving production workloads.

Electric wires have always had the capacity to carry multiple signals with them apart from electricity. This method was exploited by many ISP's and Telecom providers across the globe to provide ADSL services which was a combination of Broadband (Internet) and Telephone (Landline) services using power cables. 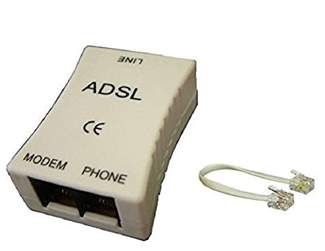 The above figure is of a commercially available Internet Phone splitter that used to be setup in an individual's house where an electric cable carrying multiple superimposed electric waves would connect to one end of the splitter and the other end would be connected to a Landline telephone and a WiFi router/modem. This technology of sending multiple signals over a electric cable is called Power-line networking and we are proposing this solution to setup a management network in a data centre. A management network will NOT be used to serve production traffic but will be used to do miscellaneous tasks within the Datacentre viz. backups and restoration, IPMI (iDRAC for Dell Servers, iLO for HP servers), OS installation, VM migrations, system monitoring etc.

Any random given datacentre would contain contain more than a dozen of network devices like routers and switches and quite a few servers. A typical network for a DC should have the following qualities:

1. Availability: The DC network ought to be constantly available at all times despite faults and failures.

2. Scalability: The DC network should be able to scale up and down at any given point as the size of the DC may increase over time. Furthermore, all devices should have access to it.

3. Deployability: The deployment needs to happen with ease and should be compatible with the existing infrastructure. [1]

Power-line Communication (PLC) permits communication of devices over a logical network connected by electric cables. To setup this network we shall be using commercially available PLC modems which unlike the switch use OFDM protocol for layer 1 and the CSMA/CA protocol for layer 2 networking. [4] Using this technique, scalability would not be an issue as the electric cabling would be present in the Data center and so would the cost relatively low as no changes need to be done to the existing Data centre's infrastructure. Below is the image of a TPLINK HyFi Intelligent Wireless PLC Modem [1]

II. WHAT IS POWER-LINE COMMUNICATION

The concept of communication via the use of power cables in not a net concept at all. Since the 1980's , electric gadgets used to send bi-directional electric signals of less frequencies to the electric grids. [9] Power cables already have the capacity to carry multiple signals of different frequencies with them. The fact that they have different frequencies means that they do not coincide with each other. This characteristic of power cables to carry data and Alternating current simultaneously is called Power-line networking/communication. [3]

This process of carrying multiple signals is possible by superimposition of data waves over electric waves. Since the transmission of the data waves happens at 3000 Hz and the transmission of electric waves happen at a frequency of 50000-60000 Hz. Since the difference between the frequencies of these two waves is huge, it is considered that the signals do not affect each other. [3]

a) The power system in a conventional DC would consist of the following:

c) PDU (Power Distribution Unit): A device that has numerous outputs and is used to distribute electric current. An equivalent of a spike guard used at home. Fig. D shows a conventional network in a DC. A study was done recently at the Hong Kong university of Science and Technology which included six servers in a PLC network, and the findings are mentioned below:

Latency: The latency among the servers in the network was about 2.2 ms which is negligible [1]

Throughput: Not more than 50 Mbps traffic was served at any given point of time [1]

Packet Loss: The packet loss rates were almost close to none. [1]

The study concluded with a comparison to a Gigabit network using a switch. The study showed the PLC networks had very less throughput and because of the noise in the network, it was highly unreliable and not suitable for fine grained and time critical tasks for eg. Load-balancing, High Availability etc. Further learnings are:

Creation of a PLC network in a DC using mere commercial PLC modems. [1]

For management network tasks for eg. backups and restoration, IPMI, OS installation etc. PLC is just fine as it gives a decent latency and sufficient throughput. [1]

Reduced cost of Equipment: With power cables across the entire Data centre, one does not need to worry about additional costs. Just a small amount of investment would be required in purchasing PLC modems. [1]

No significant amount of increase in Power consumption post using this technology. A significantly minute amount is added because of the use of PLC modems. But it is any day cheaper than buying additional network switches. [1]

Has the ability to work in Data Centres which have both AC current as well as DC current. [1]

Even after significant use of PLC networks in the study, no heating issues faced with the electric cables nor PLC modems. [1]

Easy to deploy and install without any issues as power cables are everywhere. [7]

The likelihood of this technology getting actually implemented in the year 2030 are very high as ISP's as mentioned in the Introduction are already using it across the globe. [1]

It doesn't require any specific hardware or software to be present on the system. [7]

More latency within the network as the size of the Datacentre increases. However, this can be simply solved by using network repeaters throughout the datacentre. [1]

Less throughput as compared to a Gigabit switch.[1]

There can be noise within the network because of electrical interference and hence it cannot be used for time sensitive tasks/jobs. [4]

Some older models of PLC modems will not work if they are plugged into a spike guard or a surge strip. They need to be plugged directly into the power outlet which is not feasible within a Datacentre. [5]

Older wiring in a legacy datacentre can cause performance issues.

Limited configuration options as compared to a layer 2 switch. [6]

Different brands of PLC modems may not work together. [6]

Performance increase can be done amongst PLC modems if manufactures take the initiative to create industry grade PLC modems to be used within Data Centres.

With larger networks, additional investment would need to be done as the data signals can tend to get distorted in the PLC network. Across the globe, there are thousands of villages in Asia and Africa where there is no internet. However, the governments of those regions have just managed to get electricity supply to these villages. If PLC technology is further implemented and improved at a global scale, these villages can receive an internet connection to their homes using the existing power cables and contribute towards a digital world.

A proposal was made to for this issue by folks at Ryerson University of Toronto and they proposed the following study of Broadband over Power Lines(BPL):

However, as the BPL PLC signals can get distorted post travelling for a kilometer, there are network repeaters that are setup at each power grid. Once the power cable reaches home, it can be connected to either a Wifi Router or a PLC modem which can transmit internet across all devices at home. The one of the biggest advantage for proposing BPL for providing internet to remote villages is that the infrastructure (power cables) like in the Data centre is already there and no additional costs need to be incurred by the government for the same.

In this paper, we have discussed about what PLC network is all about and a review of the study of a PLC network with 6 nodes was done. The performance comparison was made with the conventional network and a conclusion was drawn that PLC networks weren't as performance oriented as the conventional network created using Gigabit switches and hence shall be not suitable for a production network within a Datacentre. However, be that as it may, it seems to be more than sufficient in terms of performance and availability for creating a management network within a Datacentre using network repeaters. Furthermore, the advantages and disadvantages of using PLC networks in the Datacentre were also discussed in detail.

An alternate application of PLC networks was also discussed in brief using which governments of poorer nations / developing countries can use this approach to provide their citizens with a basic internet connection.

[3] HOW DOES THAT WORK? POWERLINE NETWORKING [Online], Available at: https://www.ingenia.org.uk/getattachment/Ingenia/Issue-70/H OW-DOES-THAT-WORK-Powerline-networking/How-does-that-work-70.pdf(Accessed 7th April, 2019)