2 – Why business should engage with media during crisis?

3 – What strategies are successful during crisis?

Organizations have always lived crises, some economic, others policies, more common administrative and internal, although many of them without if it is aware. Currently, the speed with which information is sent and received and with the development of the media, much of the attention is focused on organizations and their actions because the population is perceived as an integral part of the social process that organizations develop.

Crises are not merely problems or conflicts that happen daily in organizations. Crisis is an event that involves failure, which generates general distress and affects relationships. It is a fact that happens suddenly threatening the organizational image, business and may result in large financial losses.

In this essay, it will be discussed why it is important for business to engage with the media during crisis. Next the strategies that are successful in public relations for businesses during such times will be explored. In the end, two recent news stories which centred on crisis for different business will be commented.

2 – Why business should engage with media during crisis’

A significant threat to the business that can impact negatively if not controlled is considered crisis. The threat can have negative consequences for the organization, for the industry and for the stakeholders in general. Three related threats are created by the crisis: the safety of the public, the financial loss, and reputation damage. For example, flight and industrial accidents can have serious injuries and deaths as well. Financial loss can be created due to the operations break causing a decrease in the market share or due to the decreased in purchase intention (Coombs, 2007). Dilenschneider (2000) stated that all crises will affect the company’s reputation to some extent.

When a company faces a crisis, the management have to do and say something to the public. This is called crisis response. In this case the Public Relations (PR) has an important duty by helping the organization to reach the public with its message. The response needs to be very quick, accurate and consistent.

According to Fearn-Banks (2011) an organization has to prove to its customer and to the general public as well that the negative image is not a fact.

Therefore, it is really important that the business engage with the media during a crisis as soon as possible. The media is the best way to reach a wide variety of public and stakeholders very fast. The message spread out quickly and to a great amount of people. Probably some non-targets will receive the message; however, the most important is the speed and reach of the message.

According to Dolphin (1998) a good message sent to the stakeholders can create an opportunity to make the organization’s image better. Even in a bad disaster a good message has a beneficial effect.

It is also important for the business to engage with the media because when a company respond to the stakeholders about what happened it is a way of improve the corporate image and create a relationship with them. The best way to explain the crisis is using the media engagement (Barton, 2001).

Besides, the engagement with the media can show that the organization is responsible and is trying to do the best for those who have been affected. The message has to be accurate and consistent in order to improve the corporate image.

3 – What strategies are successful during crisis? 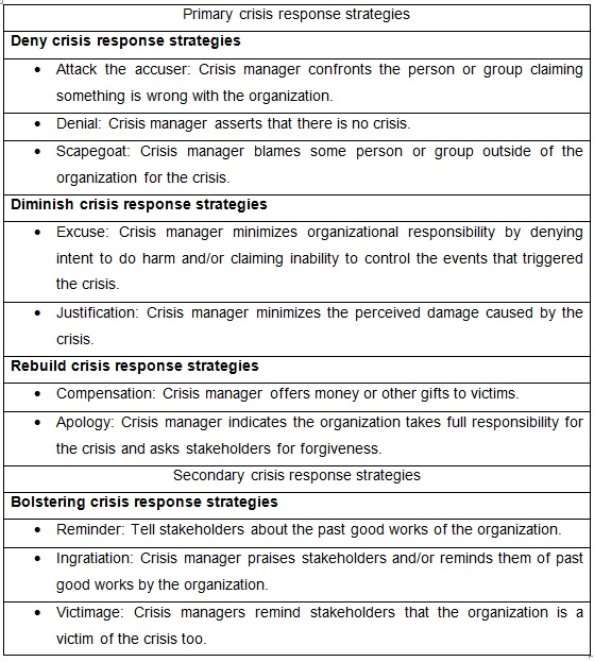 In order to assess the reputational problem of a crisis, managers should follow a process based in two steps. The first one is to define the crisis type considering the way that the media and stakeholders are describing the crisis. Coombs and Holladay (2002) create a list of crises types according to the threat each one offer. See the table 2 below. 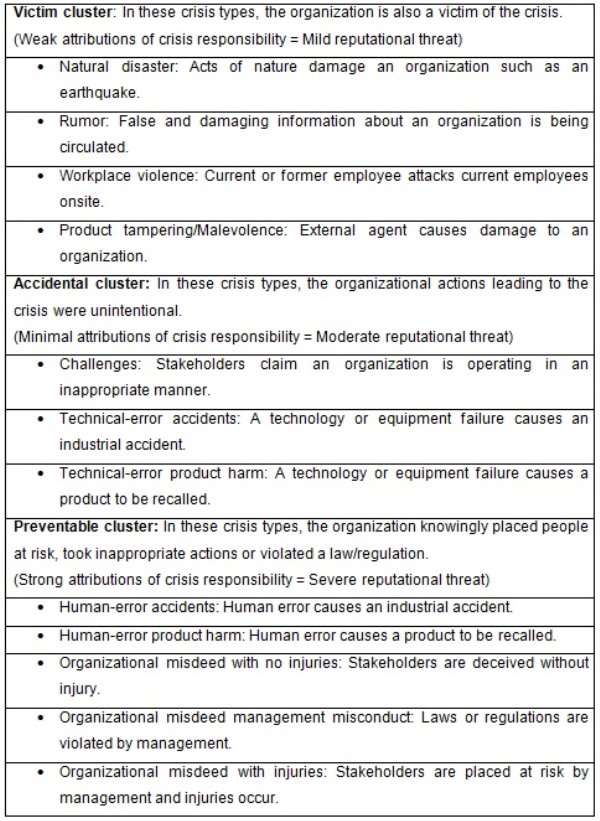 The second one is to inspect the previous reputation and important point of crisis history. In case of the organization had a negative reputation before, the threat can be enhanced. Reputation is considered an important asset for the company and it is very valuable and very important to protect. A crisis can probably affect the reputation with the negative word-of-mouth and it will decrease purchase intention. However, the reputation strategies will assist to reduce this probability (Coombs 2007).

Several recent new stories which centred on a crisis for different businesses can be used as an example to highlight the communications strategy. Two recent new stories will be analysed. The first one is about the Barilla Pasta and its chairman, Guido Barilla, for his antigay comments. The second one is about the Costa Concordia Cruise and its captain, Schettino, for do not follow the navigation system causing a serious accident.

The crisis started in September 2013. Having said that gay couples never will do advertising campaigns for Barilla, the president of the Italian pasta maker, Guido Barilla, apologized through media. The announcement was made after the statement had negative repercussions around the world and netizens started a campaign to boycott the products of the brand on social networks. The crisis type of the action taken by Guido Barilla can be classified as organizational misdeed management misconduct. According with the table 2 seen before, this crisis type is considered a preventable cluster because in that situation the organization knew that was taking an inappropriate action.

Of course all the disorder could have been avoided if Barilla had not made the statement to the Italian radio “La Zanzara”. However, since a problem of this nature occurs, there are ways of minimizing the impact. The company took a primary crisis response strategy. The rebuild crisis response, apology, was used to indicate that the organization takes the full responsibility and ask stakeholders for forgiveness.

Barilla was quick to respond to the crisis. The company post press releases on their official website and a video apology on company Facebook page. The retraction and apology from Barilla represent fundamental attitudes. It was necessary that he said he was not well understood and acknowledge the mistake. These cases it is important to accept the error and enhance the brand does not want to leave a bad image.

The speed with which the message of the President of Barilla was posted on Twitter less than 24 hours after his interview with radio was another point where the company did the right thing.

Have chosen Facebook and Twitter to rule was also a hit from the company. This is because the message first came to followers of the brand, which were probably inside the controversy. Knowing where relaying retraction is essential. It has to be directed to the right people, because they take it to those who still do not even know of the incident, will only arouse the curiosity of those people to the fact. The chairman also met some different LGBT organizations to apologize once again.

In general, the crisis situation was well controlled by the organization.

In the year of 2012, on the night of January 13, a disaster occurred with one of the Costa Concordia cruise ship in Italy. It hit a rock and started to sink with 3,206 passengers and 1,023 crew on board. The commandant was Captain Schettino and the cruise was supposed to travel around the Mediterranean sea, including ports of Savona, Marseille, Barcelona, Palma, Cagliara, and Palermo. They are not absolutely sure that the Captain has not followed the navigation system. However, they assure that if this task was followed it would show clearly the dangerous that they were approaching. Schettino said “I have to take responsibility for the fact that I made a judgment error. This time I ordered the turn too late.” Then, at 22:54 on that night, the captain gave the order to the crew and passengers to abandon the ship.

This tragedy was classified, by the Costa Concordia Full Investigation Report, as a very serious accident with dead or missing of 32 people. Also more 157 were injured, and from this number 20 were admitted to the hospital. In addition at the end they had total loss of the ship.

With regard of the classification of the type of this crisis, it can be said that is a Human error accident (see table 2). This identification came, because as said before if the captain had followed the navigation system accordingly, this tragedy could be avoided. Also they said that the procedure to abandon the ship did not follow the Decision Support System and the “general emergency” alarm was given late.

Under these circumstances, after 5 days of the accident, the company’s CEO tweeted : “I gave my personal assurance that we will take care of each & every one of our guests, crew and their families”. And some days after the CEO gave to the passengers that were on board, a 30% of discount on future trip cruises with the company. In addition, neither the CEO nor the Costa executives appeared in the pear of Giglio, the place where the ship sank, to speak with the survivors or to check the situation directly.

In conclusion it can be said that the company Carnival did not know how to deal with the Concordia ship accident. As can be expected the physical appearance of corporate executives at the scene of the occurrence can be considerable significant. Also such attitude is crucial to prove the corporation’sinvolvement and benevolence toward the victims.

To conclude, organizations have always faced a crisis. Sometimes economic, others policies or more common administrative and internal. Crisis is an event that disrupts the relationship and the normal business activities resulting in financial losses.

Business has to engage with media very quickly because it is the best way to reach a wide variety of public and stakeholders very fast and it is the way of improve the corporate image and create a positive relationship with the stakeholders. Business has to identify the crisis type and after choose one of the several crisis response strategies that are successful in public relations to handle with the crisis.

Dilenschneider, R. L. (2000). The Corporate Communication Bible: Everything you need to know to become a public relations expert. New Millennium.

For the recent new stories