Abstract — The Demand of Mobile Communication systems is increasing day by day. New concepts and methods are necessary which required the need for new Technologies to satisfy the demand of this world of network. Smart Antenna system is one of those, which reduces the co-channel interference and maximize the user capacity of communication system, By shaping and locating the beam of the antenna on the mobile or the target thus decreasing interference to other users. The Main purpose of smart antenna system is the selection of smart algorithms for adaptive array. By using beam forming algorithms the weight of antenna arrays can be adjusted to form certain amount of adaptive beam to track corresponding users automatically and to minimize interference arising from other users by introducing nulls in their directions. Thus interferences can be suppressed and the desired signals can be extracted. Many algorithms are introduced due to advancement in technology. Every algorithms has different convergence characteristics and complexity of algorithm, according to our need we use particular algorithm in communication system.

To overcome the above problem of the communication system the Smart antenna introduced. Smart Antenna system combines an antenna array with a digital signal-processing capability to transmit and receive in an adaptive manner. Such a configuration technically enhances the capacity of a wireless link through a combination of diversity gain, array gain and interference reduction. Increased capacity translates to higher data rates for a given number of users or more users for a given data rate per user.

In other manner, the system which can automatically change the directionality of its radiation patterns in response to its signal environment. By this manner, increase the performance characteristics (such as capacity) of a wireless system. All elements of the 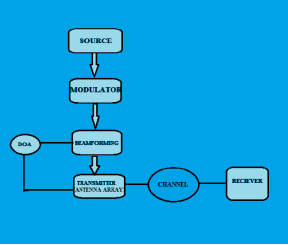 adaptive antenna array have to be combined in order to adapt to the current channel and user. A Smart antenna is therefore a phased or adaptive array that adjusts to the environment that is, for the adaptive array, the beam pattern changes as the desired user and the interference move and for the phased array the beam is steered or different beams is selected as the desired user moves. This weight adaptation is the “smart” part of the smart antenna system. It is possible to investigate a wide range of beam forming algorithms without the need to modify the system hardware for every algorithm. For this, now we are focusing on improving the performance of the beam forming algorithms rather than on designing new hardware, which is very expensive and time consumption. There are many algorithms for beamforming concept ,Every algorithm has its own merits and demerits ,according to our need we use that algorithm which satisfies our need,which are given below:-

This algorithm was first developed by Widrow and Hoff in 1960. Shahera HOSSAIN et al.(2008)[ ] proposed that LMS is a gradient based technique where in a quadratic performance surface is assumed. The performance surface that is cost function can be established by finding the Mean Square Error (MSE). The cost function is a quadratic function of the weight vector w. The minimum of the performance surface is reached when the MSE tends to its minimum value & this is made possible by finding out the gradient of MSE with respect to weight vectors & equating it to zero. The Weights of adaptive antenna are adjusted in the negative direction of the gradient to minimize the error. In LMS, the weights are updated using,

μ=Step size that determines the speed of convergence of LMS algorithm.

The weights here will be computed using LMS algorithm based on Minimum Squared Error (MSE).

step size μ is a positive real-valued constant which controls the size of the incremental correction applied to the weight vector as we proceed from one iteration cycle to the next.

The performance of the algorithm depends on the step size parameter, which controls the convergence speed. The LMS algorithm is initiated with an arbitrary value W(0) for the weight vector at n= [1], [6], [23], [25].

Whereas λmax is the maximum eigen value of the matrix R.

The Response of the LMS algorithm is determined by three principal factors step-size parameter, number of weights, and Eigen value of the correlation matrix of the input data vector. The LMS Algorithm has many drawbacks which are solved by other algorithm.

And the time average estimate of the co-relation vector is,

The SMI weights for kth block of length K as

From equation (4) it is seen that the weights of the antenna array will be updated for each incoming block of data.

Shahera HOSSAIN et al.(2008)[4] proposed ,the Normalized least-mean-square (NLMS) algorithm, which is also known as the projection algorithm, is a useful method for adapting the coefficients of a finite-impulse response (FIR) filter for a number of signal processing and control applications. It can persist over a wide range of step-sizes. Theoretically, LMS method is the most basic method for calculating the weight vectors. However, in practice, an improved LMS method, the Normalized-LMS (NLMS) is used to achieve stable calculation and faster convergence. The NLMS algorithm can be formulated as a natural modification of the LMS algorithm based on stochastic gradient algorithm

n ï€«1 with the square Euclidean norm of the input vector xï€¨nï€©ï€ at iteration n. The final weight vector can be updated by,

Where the NLMS algorithm reduces the step size μ to make the large changes in the update weight vectors.This prevents the update weight vectors from diverging and makes the algorithm more stable and faster converging than when a fixed step size is used. Equation ( ) represents the normalized version of LMS (NLMS), because step size is divided by the norm of the input signal to avoid gradient noise amplification due to x(n) [ ]

Sometimes x(k) which is the Input signal becomes very small which may cause W(K + 1) to be unbounded. However, to avoid this situation; σ which is a constant value is added to the denominator which made the NLMS algorithm be described as

we can conclude that NLMS has a better performance than LMS algorithm.

Susmita Das [8]proposed that the configuration of CMA adaptive beamforming is the same as that of the Sample Matrix Inversion system except that it requires no reference signal. It is a gradient-based algorithm that works on the theory that the existence of interference causes changes in the amplitude of the transmitted signal, which otherwise has a constant envelope (modulus). The minimum shift key (MSK) signal, for example,is a signal that has the property of a constant modulus .The weight is updated by the equation

where µ is the step-size parameter(n) is the input vector,and

In Recursive least square (RLS) algorithm, the weights are updated by the following equation.

Where, K(n) is referred to as the gain vector and ζ (n) is a priori estimation error which is given by the equation:

Ali Hakam et al.(2014) proposed that the main aim of the developed Variable Step Size (VSS) NLMS algorithm is to replace the fixed step size μ that is used in NLMS by a variable one. This is to avoid a trade-off issue between convergence rate and steady-state MSE. In this algorithm a large step size is used in the initial stages to speed the rate of convergence and a smaller step size is used near to the steady state of the Mean Square Error (MSE) to obtain an optimum value. To achieve this, μ is multiplied by P(k) which is randomly chosen from the uniform distribution [0 1]

and each time of the N iteration times. Then to control the variable step value, it is multiplied by a curve function that is

Substituting the variable step size (10) to the conventional fixed step size NLMS algorithm (8), the proposed algorithm is shown as:

Use of adaptive antenna in existing systems will reduce power consumption and interference while enhancing spectral density in wireless system which is the need of wireless communication systems.

Smart Antenna systems are antennas with intelligence and the radiation pattern can be varied without any mechanically changed. The principle reason for the growing interest in smart antenna systems is the capacity increase and low power consumption. Smart antennas will increase the SIR by simultaneously increasing the useful received signal level and lowering the interference level.