Introduction: Increasing number of children with autism spectrum disorder is 1 case per 110 Students is a great challenge for education system (1). Difficulty in engagement in class tasks, low attention span, and inappropriate behaviors are common in these students, which interfere with student’s ability to participate in the educational mainstream (2).

One reason that children with ASD have limited success in educational improvement with some intervention strategies is that these strategies do not address the sensory issues that may underlie the disruptive behavior (Ayres, 1972; Dunn, 2000). In an extensive research on 200 children with autism, %95 had difficulties in sensory modulation. Physiological need for proper sensory stimulation leads to spending most of student time on stereotype and repetitive movements to adjust their sensory system. Therefore, their attention would not be concentrated on learning and assignments in class. Greenspan and Wieder argued that the decrease in sensory processing may resulted in social isolation and inattention to class tasks (2).Viola and Noddings stated that children with low sensory sensibility require additional sensory stimulation to accomplish the tasks which require attention and concentration (3). Therefore, one of the prominent approaches to address the behavioral problems in these children is sensory integration approach.

Sensory integration approach includes integration of three essential sensory systems: the proprioceptive, the vestibular, and the tactile systems. These systems, regulate the awareness of the body in space, joint and limbs positions, control sensations of gravity and movement, and perceives the sense of touch (4). Sensory Integration theory is focused on these special key sensory systems which are useful in person’s interpretation and application of sensory information. Proper sensory integration is a gate to successful educational learning through successful application of sensory and perceptual systems which would lead to forming vital skills for doing on task behaviors (4). Occupational therapists who work in school often use sensory techniques to increase students’ levels of attending, on-task behavior, and performance in the classroom. Many clinicians perceive these approaches to be successful in promoting functional classroom behavior. According to previous findings, 99% of occupational therapists use sensory integration techniques (5). Smith and Miller had been in contact with 292 occupational therapists in 1992 and found that Sensory Integration based-therapy was the most common applied technique among all of them (6). The effects of proper sensory integration, improve students ability to educational achievements and success by goal directed use of sensory and perceptual systems. This method can lead to success in learning (Gilman). Furthermore, formal research conducted on sensory-based interventions has supported this belief (Schilling, 2004; Schilling & Schwartz, 2004; Schilling, Washington, Billingsley, & Deitz, 2003).

Hemmingsson and Borel in their investigations emphasized on lack of environmental modification in the classroom that directly refers to the limitation of student’s engagement. So, lack of proper changes in environment can lead to restriction in learning. Furthermore, previous emphasis in pediatric occupational therapy has been on modifying the individual’s behavior with less emphasis placed on changing the environment, but focus is now shifting to ergonomic and sensory modifications to promote academic success (Asher, 2010). Various sensory-based strategies, including the use of alternative seating devices, have been examined by researchers and in many cases have been found to promote functional classroom behavior (Fertel-Daly, Bedell, & Hinojosa, 2001; Schilling et al., 2003; Schilling & Schwartz, 2004; Zissermann, 1992). Two of these functional methods are the using of balls and air cushions rather than common chairs. The use of therapeutic balls have been lead to marked improvements in the in-seat behavior and legible word production, in school age children with attention deficit hyperactivity disorder (ADHD; Schilling, 2004; Schilling et al., 2003) and to increase in engagement and in-seat behavior of preschoolers with ASD (Schilling & Schwartz, 2004) (7). Clinicians have been using dynamic seating systems such as the Disc ‘O’ Sit cushion for many years to assist students to increase their attention span. While clinical evidence that these systems can lead to desired results, but very little research has been completed and published to support their use.

Sitting on a ball allows the child to pay more attention to activities while receiving stimulation in a passive form, rather than seeking stimulation from disruptive activities. Gamache-Hulsmans (2007) stated that students said they feel better when sitting on ball chairs. Students also felt more comfortable and said their backs did not hurt when sitting. The ball chairs are soft compared to regular classroom seats and are more fun to sit on (3).

To what extent, dynamic seating chairs will effect on attention to on task behaviors and in-seat behavior? Therefore, in this research, the effects of sitting on ball and air cushion were investigated. With regards to thousands of special students with difficulty in sitting and classroom performance, these devices may be optional selection for solving the mentioned class behavior problems.

Data collection: Gilliam Autism Rating Scale-Second Edition (GARS II) and Vineland testes were given and were used to examine social and communication skills of students in the first and final of research for all students of class. To assess the students’ class behavior, staff was instructed to give no additional feedback on students' sitting behavior either positive or negative throughout the duration of the study. But, if a student exhibited behavior that could be potentially harmful to him, peers, or the staff must have been prevented by staff. To remove any novelty effects, students were introduced with stability balls and air cushion instead of their chairs for 2 full days, before baseline data collection.

Therapy balls: The selected therapy balls to be used in classroom use, had 55-cm-diameter ('n' Sit ball by …) with five little feet to prevent it from moving or rolling when used as a sitting ball. Therapy balls were individually fitted with air pressure into the ball (at different degrees of inflation) that confirm the student could sit comfortably with his feet flat on the floor with knees and hips flexed at 90 degrees.

Air cushion: The Disc ‘O’ Sit cushion is a round and widely available. The Disc ‘O’ Sit, are instability cushions, strong enough to sit. It is designed to fit on a classroom chair and provide movement while seated (7).

1. Participant 1, speak with himself slowly and repeatedly with low attention and cannot tolerate sitting on chair.

Participant 2 an 8-yr-old boy, he has low level endurance for performing occupation and sitting. He was hyperactive.

Participant 3 an 8-yr-old boy, he has visual perceptual problem with low attention and endurance.

Each child’s data are presented in separate graphs in Figure

(A) Total number of times that Hossin was on seat each phases. 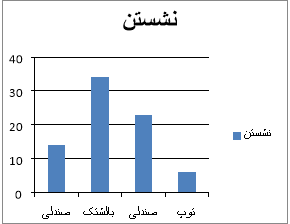 (B) Total number of times that Hassan was on seat and engaged each session. 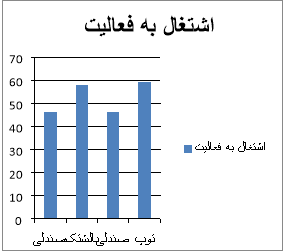 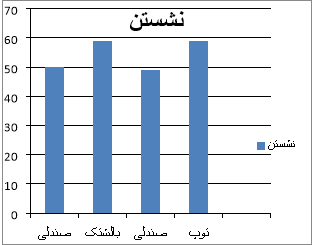 (C) Total number of times that Parsa was on seat and engaged each session.

(D) Total number of times that Amir was on seat and engaged each session.

Each child demonstrated a unique response to the use of the therapy ball chair and air cushion.

Conclusions: This investigation suggests that dynamic seating in the classroom, increases in-seat behavior & on task behavior for children with ASD. However no one type of seating was found appropriate for all children with ASD. For some forms of classroom behavior, the use of dynamic seating appears proactive, serving as a positive behavior support strategy to assist in creating an opportunity for learning.

3.Horgen KM, Kathryn M. Utilization of an Exercise Ball in the Classroom:

Its Effect on Off-task Behavior of a Student with ADHD [thesis]: University of Wisconsin; 2009.

5.Tunstall H.R. Effects of Alternative Seating on the Academic Engagement of Children With Autism 2010.