When a person thinks about fast food, often, the first name that comes to mind is McDonald’s.  McDonald’s has been a company since Ray Kroc purchased a hamburger franchise from the McDonald brothers back in 1961 for $2.7 million (History:McDonald’s, 2019). Kroc knew how to grow a business, quickly taking McDonald’s international in 1967 and becoming a household name.  In fact, in today’s world, Ronald McDonald and the Golden Arches of McDonald’s are more recognizable than the Christian Cross, with a 96% identification rate amongst children, only second to Santa Clause (Fast Food Nation, 2011).  This kind of brand recognition has enabled McDonald’s to not only be the top fast food company in the food business, but a leading company in the business world.

McDonald’s company values, objectives and strategies are being tested in today’s market.  While striving to best serve their customers quality service and food, the demands of today’s society are requiring large changes to the business.  These values that McDonald’s puts forth are broad enough to capture these sorts of changes while still laying out a general plan for the way they will deal with these issues.  They have even taken things a step further and outlined on their own site how they strive to work with current trends of conservation and modernization.  These values hold true for the company not only domestically, but also on a global scale.  The commitment to customer service and quality food is as equally strong on the global level.  McDonald’s continues to reassure their commitment to customers, investors and employees equally.

While McDonald’s has been a leading company for many years, it has seen a decline in some of the most recent years.  In 2011 Subway passed McDonald’s for the most worldwide locations (Jargon, 2011).  Casual fast dining restaurants like Five Guys, Shake Shack, In and Out Burger, Chipotle, Panera and Qdoba seem to strike a chord with the current generation that makes up a large segment of consumers, Millennials.  In fact, McDonald’s went from a 50% market share of fast food burger restaurants in 2010 to only 17% in 2016 (Dess, McNamara, Lee, Eisner, 2019).

One telling statistic is how the company has steadily decreased in revenue over the past three years, going from $27.4 billion in 2014 to only $24.6 billion in 2016.  This can lead to two conclusions, either McDonald’s is starting to fall in their business strategy or other companies are catching up.  Another telling statistic is the fact that the Big Mac, considered the flagship sandwich of McDonald’s, has only been tried by 20% of Millennials.  The restaurant had its first ever quarterly loss in 2002 which led to stocks dropping in value and a reduction in the per shares earning growth (Dess et al, 2019).

While there were numerous struggles in the following years, McDonald’s has seemed to rebound recently.  Third quarter numbers were recently reported for McDonald’s and there is reason for hope.  Projections were reached and exceeded by the company in the third quarter of 2018.  Wall Street was expecting the earnings per share to be $1.99 when, it was $2.10.  Likewise, revenue was expected to be $5.32 billion and the actual revenue was $5.37 billion (Whitten, 2018). This would seem to indicate a positive trend even though these numbers are slightly lower than the previous year.  This decline is being attributed to the fact that McDonald’s is putting large amounts of money into revamping their restaurants with features like self-order kiosks and delivery services. 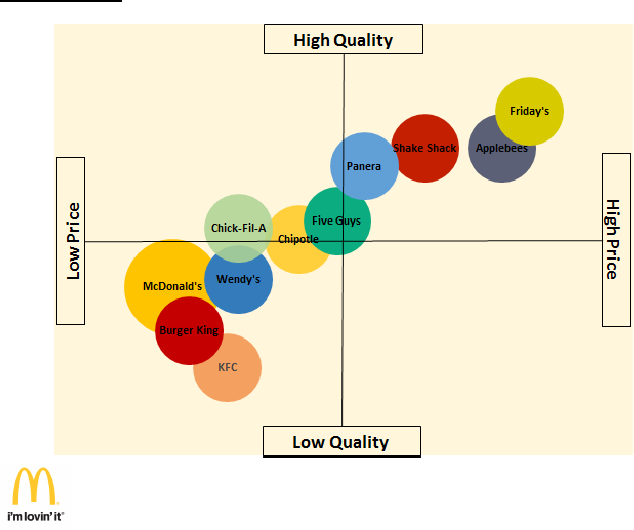