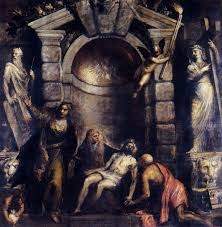 Tiziano Vecellio’s painting of the Titian was known as one of his greatest paintings and it was also one of his last as he died one year after it was finished. The painting was created in 1575 in Venice when a major plague was going around and Titian painted it as a confession so that he and his son, Orazio, may survive the plague. Sadly though he died a year later from the very thing he prayed he would not be stricken with. (Wikipedia)

The Pieta is an oil painting that is on canvas. It is a Christian depicting the dying Christ being held in the arms of Mary. Christ and Mary are surrounded by a man in red who is attempting to touch Christ. They are also surrounded by angels, another woman and 2 statues. The elements of art that you can see in this painting starting off are the shapes. The shapes of the painting consist of circles, triangles and rectangles. The most prominent ones are the rectangles as the rectangles surround Christ and Mary and border the whole painting. The second most prominent shapes are the circles and they are the heads of all the figures that are around the border of the painting and the ones who are surrounding Christ. The shapes are very organic and don’t stand out and blend within the painting. The next element of art is the colors in the painting. The main colors of the painting is brown and a bronze color. Both of these colors appear in the painting at varying degrees. The secondary colors that appear are that of a slight shade of blue and an almost unnoticeable red. The rest of the background and borders of the painting are painted by a slight hue of grey. The middle of the painting above May holding Jesus is a tomb and the inside is a very noticeable gold. Jesus also is a very pale white and has gold aurora around his head. This is a complimentary Color wheel as the red and blue contrast each other and the greys and golds also contrast each other. This creates a beautiful tension of the piece dividing it in half for left and right. This piece has no texture at all as the painting is painted by oil painting. (Pieta). The Depth in this painting is emphasized by the tomb behind Jesus. It is further emphasized by the statues on the left and right and the shadows that fall behind them. The lines in this painting are very organic and draw attention diagonally towards the center. Many of the lines behind Christ are curved and the ones above are sharp corresponding to the shapes.

The Principles of design in this painting include balance, variety, unity and contrast. The contrast is only really the colors and the division of the middle. The red and blue, the gold and grey and the division of the middle of Christ in the middle, Mary on the left and the man on the floor on the bottom right. This painting is very symmetrical for the most part with contrasting statues, angels and people around the painting. Where you often look first is in the middle with the pale Jesus and Mary holding him. You then linger around the center and look at the angels and then the statues. There is more visual weight of color and the strongest color in the middle above Jesus. The variety aspect of this painting includes the different angels, statues and engraving that surround Jesus and border the painting. This gives a very appealing look to the painting and it gives symbolism as the angels represent good and they are all around Jesus. The most interesting texture in the painting has to be the gold tomb behind Jesus. The design of unity in this painting is with the angels and the statues being the same and have the same color and both of them border the painting. The negative space in the painting is behind the statues and is made interesting by highlighting the tomb as more bright and draws attention away from the negative spaces. All of these design principles help construct and emphasize the painting even more.

The Painting is about Mary holding a dying Jesus near his tomb. It is a Christian painting that was meant to be put in a church but Titian died before he could put it in the church. The painting does give you emotional feelings. The meaning of the art was a sort of confession from titian to god so that he and his child may survive the plague that was going around in Italy (Wikipedia). The way he did the confession was by painting Mary holding Jesus and he dies. Hi confession must have been that he was probably not a good enough Christian and he probably feared that god would punish him so he painted one of the most emotional and tragic events in human history, the death of God’s son. Although this a very sad scene and is the death of the son of God, I feel very peaceful when I look at this painting. He painted the colors so that Jesus has a golden halo around his head and that symbolizes that he is the special person in the painting and  is important ( Wikipedia).  Behind Jesus and Mary is a tomb that has gold on the underside of it. That represents he is of high royalty and is to be buried as such. The angels on the sides also help emphasize that Jesus is very important. The whole painting is to symbolize that Jesus is the son of God and is very important, Titian painted this painting so that it is Jesus’s final moments and they will be peaceful.

The two art theories that would be best at analyzing the meaning and effect this painting has on people’s faith and religion would be the Formal and Contextual art theories. They are best because we could use formal to see his former inspirations and what caused him to focus on Christian paintings. We could then use the Contextual theory to analyze what all his Christian / non- religious paintings mean and the effect they had on the public and the Church. The Church back then was very powerful and art was very appreciated by it (Wikipedia). This Painting ultimately, was a confession to God and was a painting to honor and respect Jesus. Titian painted his final moments as beautiful and peaceful surrounded by all who he loved.

Titian painted the Beautiful and majestic painting Pieta as a confession to god so that he and his son may survive the plague that was affecting Venice. Titian left the Pieta unfinished at his unfortunate and untimely death in 1575. It was completed a year later by a fellow artist who respected his art style and copied it. The Titian Is on display at the Gallerie dell’Accademia in Venice.