Is art history neglecting the value of an object? Is it only important to understand how we see art, instead of what makes up its creation? A classmate’s crystal tower (Fig. 1) can be a contemporary example of how one can experience the materiality of an object. It is unknown of who manufactured this object or how it was found except for its main purpose to inhibit spiritual qualities. With this in mind, it can be noted that there are many scholarly sources that investigate artworks by observing it visually rather than what materials make up an artwork. This paper will examine how this crystal object correlates to the importance of material culture despite being highly overlooked in art history. We will refer to the various methodologies of Michael Yonan’s essay Toward a Fusion of Art History and Material Culture Studies when discussing the object’s form in relation to logic and how different methods of analyzing can suggest its meaning.

In order to discuss the crystal’s value within the context of material culture, one must first thoroughly analyze it in order to discover its historical meaning. In Jules David Prown’s essay, he mentions the three modes of descriptive analysis: substantive analysis, formal analyses and formal analysis.[1] The crystal’s height is at least three inches, an inch of width and appears to have six sides and these physical dimensions contribute to the substantive analysis. For the crystal’s formal analysis, we can discuss what happens when we rotate the object. At first glance, it is a hexagonal prism that extends to a pointed top. Each side is a smooth texture with a different pattern with the green, purple and white. This can determine the object’s rarity since these colours are often found in fluorite crystals. Hence, it can be said that this object is common. This interaction of touching and moving this object allows the viewer to gain more of a connection with it rather than just by looking. However, this current connection is different from the object’s relationship with the owner. The historical context behind this crystal has served as a personal momentum passed down by the owner’s grandfather. This leads to the formal analyses of the object’s purpose since this was used privately to heal the mind and bring balance into one’s life. With this information, the crystal may have been used to heal the previous owners at a certain point. This can prove how our current relationship with this object is not equal to how it has been previously used in the past.[2] We can only describe the object on what we see, touch and analyze it historically, however, we do not hold that same experience and emotions in comparison to the owner’s connection to it. By using these methods of analyzing an object can contribute to at least understanding the importance of material culture through its sensory qualities, emotional response and its background knowledge.[3]

To relate the crystal object in the context of art history, it would be considered as part of the “decorative arts” which are undervalued compared to the “high arts”.[4] This is because art history prioritizes the visual component instead of the materiality when interpreting art.[5]However, Aristotle believes that art does not only have to been seen but to be able to experience its structure and being.[6] This object can be interpreted in Aristotle’s philosophy of how every object contains matter and form,[7] which assumes the two types of logic that Yonan discusses taken from Prown’s essay; material and semantic.[8] The material logic is related to physical qualities of the crystal such as its shape that has six sides, its height of three inches, the smooth texture, and that it is heavy in weight. The crystal also gets its logic from the type of crystal used to construct it.[9] This is determined by different tones of green, purple and white which could indicate that it is a fluorite crystal. The semantic logic of this crystal is how the material of fluorite is modified to suggest meanings and beliefs.[10] For instance, the crystal’s function of healing and spiritual properties. The fluorite crystal serves a personal use for the owner which is derived from its healing properties. When it is cleansed and used in a ritual, it can aid one of manifestation and can be placed in a specific location. With this analysis of material and function in relation to logic, it can be said that an art object should not only focus on how it represents something but also recognize that its entity is made from matter and form.[11]

By examining the crystal object, it is understood that by using Prown’s three modes of analysis helps determine its use in a historical setting by describing its sensory qualities, its emotional effect on someone and its background information. The crystal is also in relation to Aristotle’s theory of not only prioritizing it as we see it but rather how we experience its being in matter and form. Art historians prefer interpreting art in the context what the two-dimensional surface can represent. They do not focus on how its material and what type of material makes up that surface. If material culture is ranked on the same hierarchy as visual culture was in the context of art history, then all art can be perceived and interpreted in a new light. 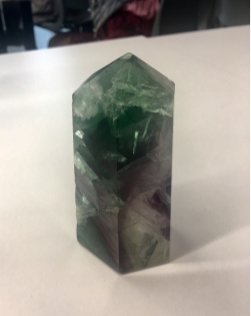 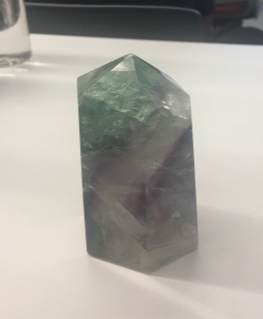 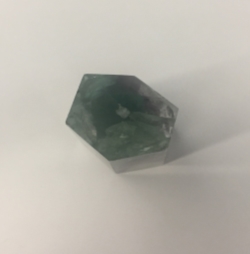 [2] Yonan. “Toward,” 242. Prown acknowledges that our current sensory relationship to an old object is not equal to how that object was perceived by its past owners and users. Thus, its history with the previous owners distinguishes our relationship with it.

[3] Yonan. “Toward,” 242. Prown recognizes how objects engage with interpretive perceivers and highlight their physical dimensions through sensory qualities, intellectual responses, and emotional effects.

[4] Yonan. “Toward,” 234-235. Often art historians employ the term to describe objects traditionally understood as the “decorative arts” such as ceramics, metalwork, woodwork, glassware and so forth. The “high arts” including architecture, painting and sculpture was highly regarded for its visual and aesthetic qualities. The art-craft hierarchy places painting and monumental sculpture at the apex of art-historical classification, with other sorts of creations viewed as meaningless.

[5] Yonan. “Toward,” 238. Materiality has rarely been formulated as an essential component of interpretation, and this is because art history has persistently privileged the visual aspects of art over the material. Much art-historical writing continues to undervalue materiality as a component of its scholarly mission.

[6] Yonan. “Toward,” 246. Yonan explain’s Aristotle’s ideology about how matter and form makes up any object and its structure is enable to be for what it is. Form makes the object a thing in the first place and is, therefore “analogous to the idea, concept or design of being”.

[7] Yonan. “Toward,” 245. Yonan uses Aristotle’s idea of how matter and form are always present in things, and to constitute a thing, matter and form must assume a structure, an organizing principle, design, composition, or logic.

[8] Yonan. “Toward,” 244. Yonan mentions how objects have a logic that can exist on two levels. One is material: how the raw stuff was amassed, put together, combined, or otherwise altered to make a finished thing. The second logic is semantic. The ways in which materials are combined or modified into things allocate to them meanings that are culturally determined, and mutable over time and space.

[9] Yonan. “Toward,” 244. The author uses a wooden bowl as an example in this context. It gets part of its structural logic from the wood used to construct it, and some of its final qualities are inherent to the original material, like the wood’s grain, density, and hardness.

[10] Yonan. “Toward,” 244. The formal qualities of an object relate to each other in ways that suggest relationships, connections, and discrepancies. These may reveal unstated or otherwise suppressed beliefs or assumptions, and they may just as easily be in contradiction to a culture’s hegemonic beliefs. In this case, this idea can correlate to spirituality within the context of crystals.

[11] Yonan. “Toward,” 246. Aristotle’s believes that “art is not exclusively a representation of something else (although it can and often does represent), but is also a structured entity composed of matter and form.” Furthermore, the object does not need to represent anything, or it can represent it in many ways, or in a single way.