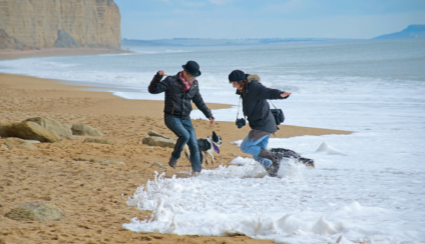 The term ‘landscape’ refers to the way of making sense of the world through culture, standing back viewing from afar and also as we live and work within. Landscape itself can be produced by histories, understandings and values and form, playing a significant role in expressing power relations. It brings together ‘culture’ and ‘nature’ describing a way of viewing land and physical properties of land itself (Oxford Dictionaries | English, 2018).Representation is a process of associations of visual images and language with cultural practices and classes of society to produce meanings about these groups and practices, exercising power and create inequality between these social groups (Oxford Dictionaries | English, 2018).

Figure 1.1 portrays a photograph taken on the southern east coast, in a village of Burton Bradstock featured on the national trust handbook in 2017 (National trust, 2017). This photo conveys the organisations principal interests as well as portraying the message of ‘to go outside, explore and build memories’ (National trust, 2017). The National trust is known for conserving large country houses, parks and gardens formely belonging to high members of society, whereas this image isn’t fitting with their usual conservations. Its purpose as a registered charity is ‘The preservation for the benefit of the Nation of lands and tenements (including buildings) of beauty or historic interest and, as regards lands, for the preservation of their natural aspect, features and animal and plant life. Also the preservation of furniture, pictures and chattels of any description having national and historic or artistic interest’ (National Trust, 2005).This image is significant as it captures the natural and social interactions and how they work together as It isn’t focused on the physical setting, people or animals in it. Therefore the message portrays how we see ourselves in the landscape, building on the message of ‘to go outside, explore and build memories’ facilitating our explorations. The fact that people are pictured in this image (figure 1.1) interlinks environment and society as people are using the landscape around them (environmental)

to build memories which is social. The aims of the National trust have linked environment and society through the natural and cultural heritage of landscape conservation, holding the largest private landscape value in the UK, managing the Lake District (c.25%) and the Peak District National Park (c.12%).The coastline of Britain has a cultural significance for the British Isles, separating the Isles from mainland Europe and has iconic markers such as the Chalk cliffs on the southern coast. Linking the environment of the Jurassic coastline with society, it is known for providing fossil evidence identifying the geological history of the isles comparing the principles of Charles Darwin’s theory of evolution. This brings together stories concerning geology, evolution and national identity.

Human life is also helpful in understanding nature, even though nature is indicated to separate from humans, due to the association with the National Trust image (Figure 1). Photo sharing websites speak to the audience through visual language. Landscape isn’t just referred to the area around us but has another meaning in day to day society. Microsoft office uses ‘portrait’ and ‘landscape’ orientation to set out a page. In this insistence, landscape refers to the proportions, the relationship between height and width.

Why is focusing on the process of representation helpful in understanding environment–society relations?

Representation is where something stands symbolically for something else. Focusing on representation is helpful in understanding environment-society relations as it can produce and circulate particular meanings in a cultural context. Culture is concepts that overlap and interconnect to share values, meanings and practices generated in the world to communicate with each other and make sense of the world today. (Oxford Dictionaries | English, 2018). Cultural entanglements are the way cultural processes, such as representation and discourse entangle social and environmental processes to produce cultural forms such as the idea of landscape, anticipating weather and creative imagination of environmental futures. The idea of cultural relativism is that it is impossible to view different systems of cultural practice based on forms of cultural representations such as images or objects that carry different meanings in different places and times. Therefore, cultures can’t be considered greater or lesser than each other due to cultural meaning existing in relative terms. An example of representation in a cultural context would be using ‘woman’ to stand for nature, exercising power in the construction and circulation of the meanings and how it can be turned into inequalities Culture communicates similarities and differences between social groups, identified through cultural practices such as gendered differences in dress, ‘we are able to build up a shared culture of meanings and thus construct a social world which we inhabit together’ (Hall, 1997a).

It is continually shifting and developing in varied ways and over time. For Hall, the power expressed through this ‘cultural authority’ and the transmission of differences into inequalities occurs through a process called hegemony where a particular group forges a dominant position in seeking to establish cultural superiority. However, what is crucial to the understanding of hegemony is the way that this dominance is constantly fought for and negotiated, it is never stable and always contested. In this context, authority is maintained through creating the illusion of stability and order by a dominant group or, as Hall puts it, ‘hegemony is a form of power based on leadership by a group in many fields of activity at once, so that its ascendancy commands widespread consent and appears natural and inevitable’ (Hall, 1997b).Stuart Hall (1997) states that ‘culture – as a process, a set of practices […] is concerned with the production and the exchange of meanings.

Nature has many meanings that contradict and relate to each other, particularly in the relationship between nature and humans. It can be seen as a system of laws outside human control but influence and constrain human actions (laws of nature) but can be central to our existence (human nature) (Oxford Dictionaries | English, 2018).This use of representation to challenge a dominant separation of nature and culture highlights the value of a more emotive connection to the natural where the environment is something we are situated within rather than apart from.

Landscapes in media can be the main subject of radio and tv programs, however a significant amount of programs use landscape to tell stories about people, place and wildlife Landscapes in these programs are used as a representation to convey meanings to actions and words of those in the stories as the National trusts image (figure 1). Representations of landscapes connect us to them, such as images of family farms and aristocratic estates are central to the way people are imagined through landscape (Butcher and Morris 2015). Countryfile (BBC 1) is a perfect example of the way representations of landscape are used on television. Representations of weather through the use of imagery varies in appearance and setting whether it being through maps or landscape paintings. Paintings and drawings helped Joseph Mallord William Turner and John Constable record cloud patterns (Thornes, 2008).Meteorologists today work with satellite images that Turner and Constable would have been interested by, recognising creative skill required to re work complex images for rapid communication to mass audiences in broadcast weather forecasts.

Identifying discourse in climate change: burning fossil fuels by humans has raised the levels of CO2 and other greenhouse gases in the atmosphere causing environmentally damaging temperature rises. Counter acting discourse on climate change is in which greenhouse gas emissions caused by humans play little or no role in what is seen as natural processes that will rebalance itself with time. This portrays that discourses can be multiple, holding less or more influence.

It is clear that through the cultural processes of representation, discourse, environment and society have become deeply interrelated. We have attempted to share our understandings of our environments through a range of representations including art, film, literature and weather maps, at the same time imbuing them with a raft of meanings that demonstrate our interpretations of wider social and environmental relations. These representations have contributed to and reflect wider discourses or systems of knowledge, for example ‘natural sciences’ such as meteorology, through which we endeavour to make sense of the world. They can also produce powerful affective responses in us, shaping how we think about and act towards each other and our environments.