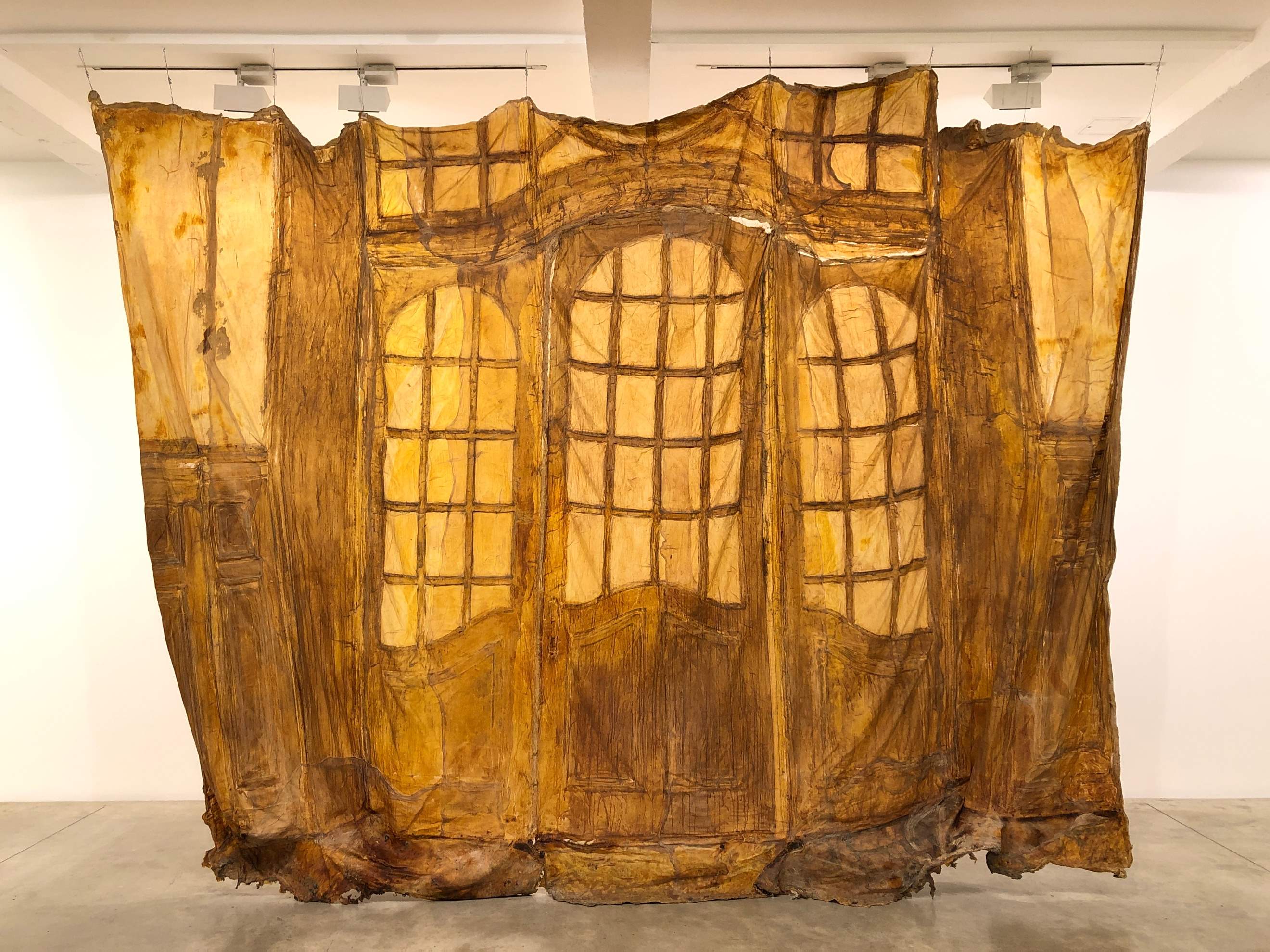 Heidi Bucher used latex and textile to present the past to the present. By casting Bellevue psychiatric clinic near Lake Constance in Krenzligen, she brings up the memories and history to people from a place had been abandoned. ‘It isn’t just the past. Past and present and everything- it’s one world. And people from today and yesterday come together. It’s all one thing.’ (Heidi Bucher, 1978). Other than the content itself, as a conceptual art, by the act (production of the work) and the fade of material are also as one.

A glass portal from the architecture Bellevue psychiatric clinic- a building which is in danger of disappearing, was present to show the relation between space, people and time. Seeing a life size 2D surface the Bellevue psychiatric clinic let visitor to illusion a 18th century private psychiatric clinic is just right in front of you. But in fact, the psychiatric clinic had already reconstructed into commercial space and residential area, which is no longer exists and be seen again. Heidi Bucher used an image-like or sculpture to bring modern people back to the past, to let people who have connections and the history happened in it to be unforgotten. Hence, to connect people now with the people in the past by memories, histories and imaginary with the reproduce of a disappeared building. The material makes the work ghost and fabric-like, which makes you imagine when the wind blows, the work will follow. Also, the transparency and the architectural design gives people a sense of memory and solemnity. ‘Bucher’s process invariably preserved a haunting imprint of an architectural surface or an object which was simultaneously both a physical encapsulation of and a liberation from the memories these things held for her.’ (Laura Cumming, 2018). What we can see physically, is just an old building, but what it’s trying to say is that a place/ space can have a different meaning for different people, and she is trying to share those different memories, escape, clear or capture. ‘She thus made it clear how strongly the human body remains bound up with architectonic reality, and how memories, obsessions, dreams are materialized in the surface of interior space.’ (Karen Marta, Simon Castets, 2014, p.11). In this work, artist present a psychiatric clinic in front of the audience. When considering psychiatric clinic, most of the people will think of poor and sad stories that happened inside, ‘A psychologically occupied space that represents control and the exercise of power in the sense of meant by Foucault: a place where the human being is naked, reduced to his skin, and exposed to total surveillance.’ (Karen Marta, Simon Castets, 2014, p.59) In her work, people cannot share the same experience, but the memories and the sense of powerlessness in others’ situation. Perhaps, in the meaning of the space, people can find their own memories of their past. A work as memory.

Everyone would have a place that meaningful to them and want to keep an object inside or remember the space well with they leave. Heidi Bucher chose to use latex to take the outlook of an architecture surface. By using latex, a material that easy to fragile and discolor because of its susceptible to oxygen. It would become darker and browner as time pass, which become like shrouds. After she applied latex, she torn away the ‘skin’ from the original building. Meanwhile, latex is a material that good to depict texture and have a strong tension when pulling away, it also peeled off some color pigment, sand and wood which show the traces of the building itself and the memories of people. 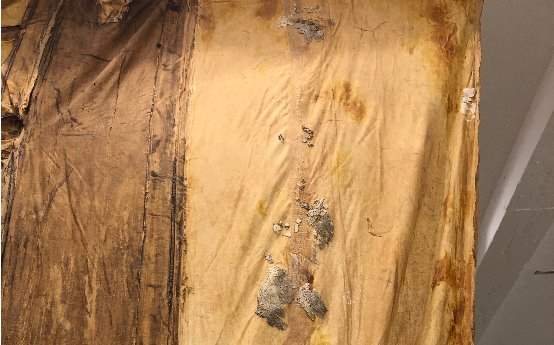 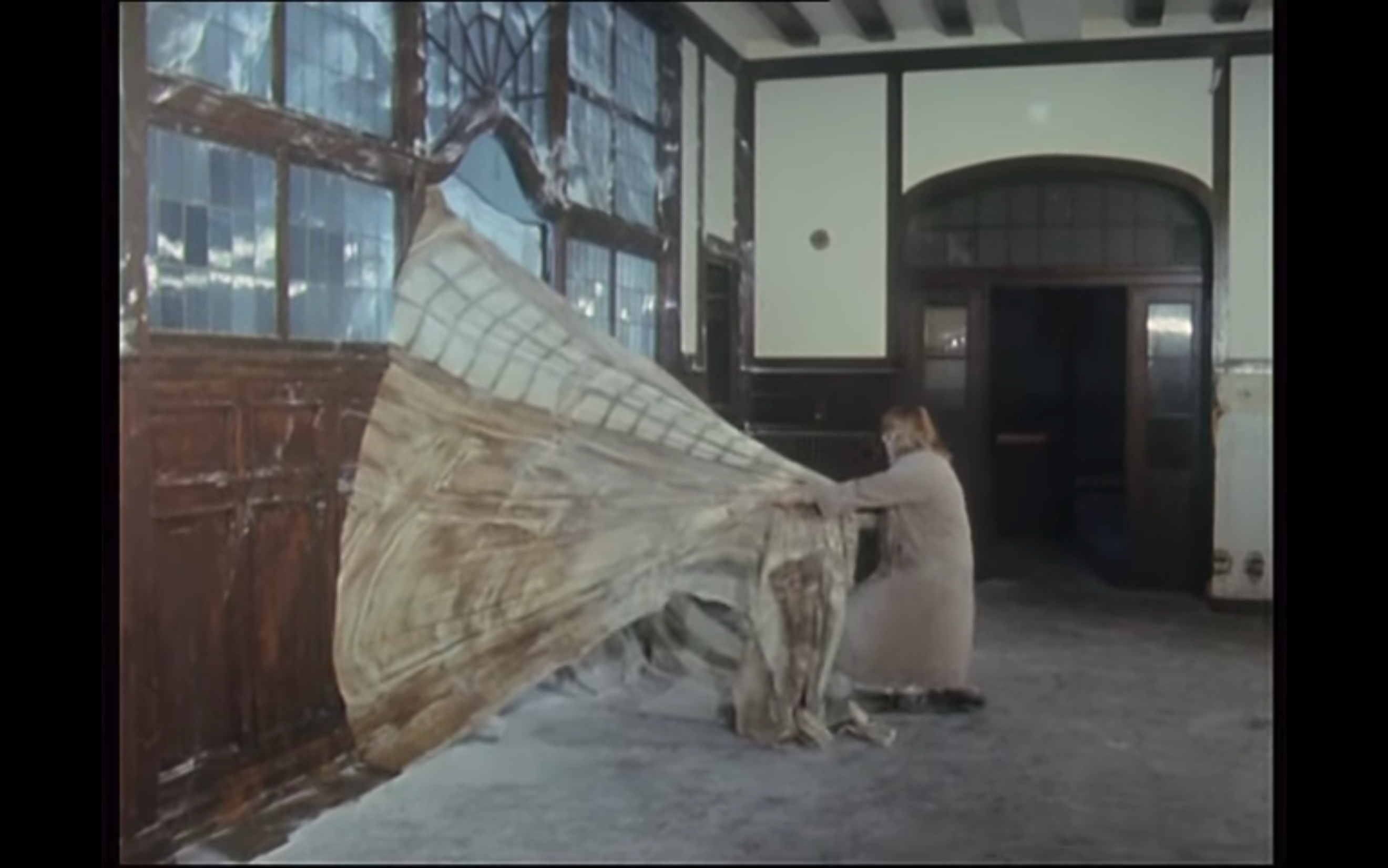 In the film, we can see that the tension of the ‘skin’ and Heidi Bucher is pulling it very hard. It almost explaining people try hard to take away something with them in a space to not forget it. “To create her skinnings, Bucher first covered her chosen surface with gauze, pressed liquid latex into it, then when it was almost dry she peeled it off” (Parasol unit, 2018). It explained why when the work is hanging on the wall, it shows a sense of overhang by its own force and strength, so to give people a sad and untouchable feeling. But because of the fragility of the material, it is not long lasting, the work will fade away one day. ‘I’m not sure whether Bucher’s performance is one of embalming or exfoliating, of holding on or letting go’ (Amy Sherlock, 2014, Frieze). When the day the work fade, everything would be gone, both the work and the traces it peeled from the building, and other way to understand the work is that Heidi Bucher may want to clear the trace of the building, taking away the sad memories that happened in the space, to give a new life of the building and the people. 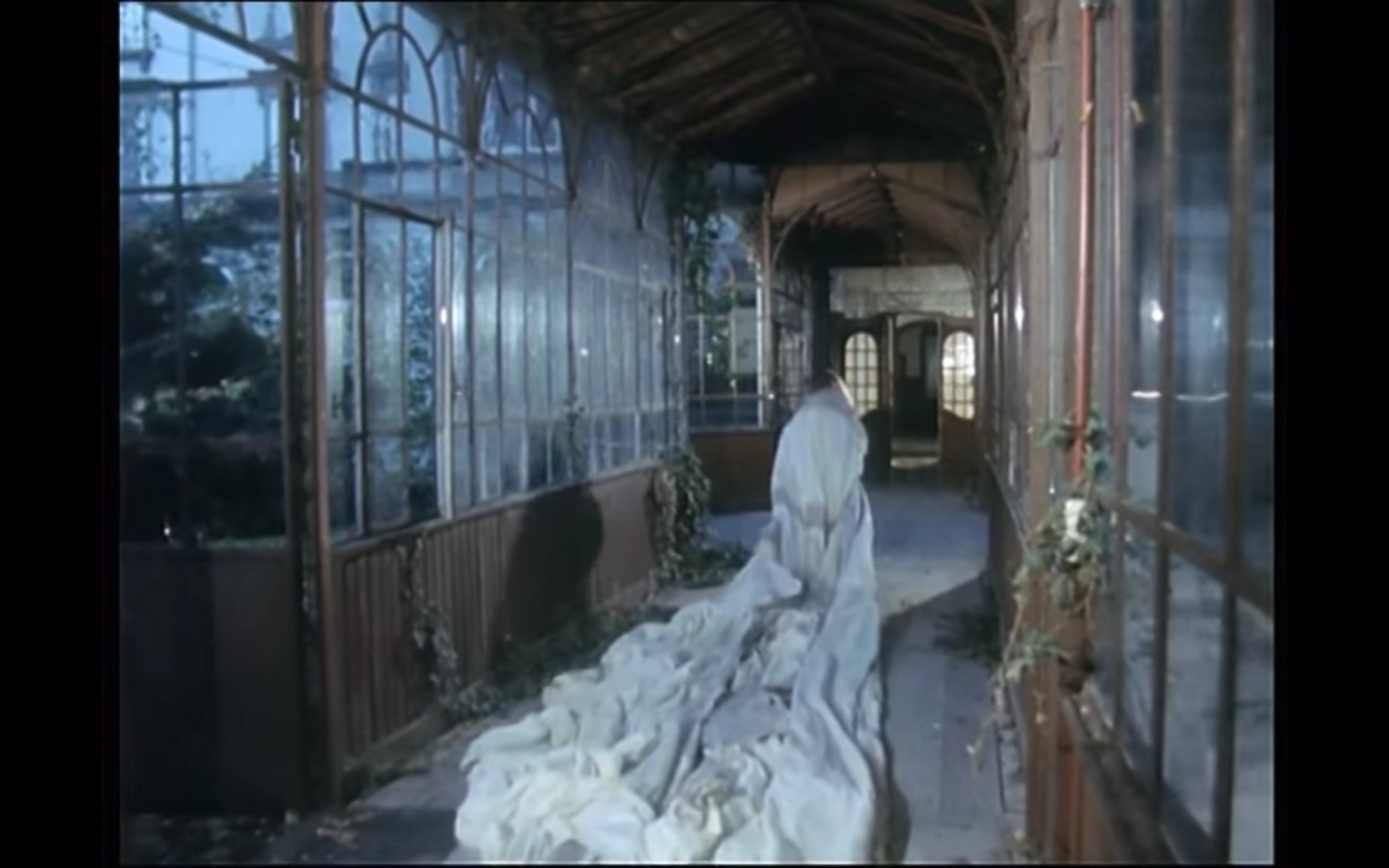 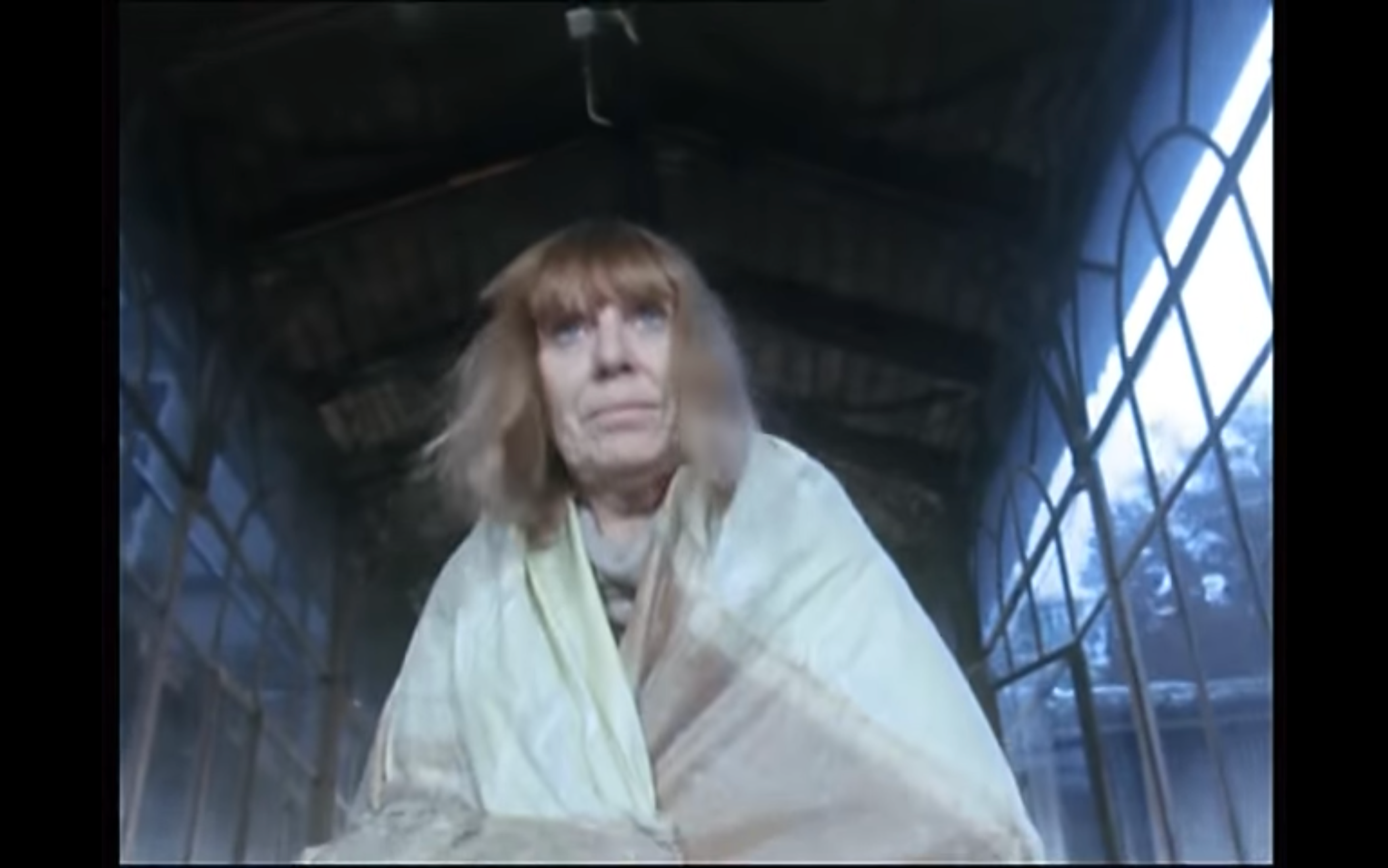 In the film, when Heidi Bucher taking away the ‘skin’ her face is strong and no hesitation, keeping walking forward, it makes me believe that she wants to ‘clean’ and free the space- the trace of past. Bring away the traces of people and clean the evidence and the sad memories that they were here before. Sense of keeping it, but because of the materiality, it would fade, and everything in the space include the history, feelings and memories will fade and slowly forget.

Kleines Glasportal, Bellevue Kreuzlingen is a physical work made by textile and latex, but it is just a part of the work, what makes the work complete is the action of Heidi Hucher peel off the ‘skin’, the physical work and the fading of the latex and the work. ‘A quintessentially “Conceptual” manner disregarded time and space limitations’ (Lippard, L, 1997, p.15). A work without time and space limitation become a whole for the work. By taking the ‘skin’, the action, of the historical building to a gallery space, showing people the history and the time- fade of the work because of its materiality. The work keep change in its own, which is an important process of the work, presenting the history of the work and the meaning of forgetting by time in content by the work fades in the future. ‘Through this slow decay, Bucher brings us closest to the provisional nature of memory that she was trying to describe. As we carry our past around with us, it creases and crinkles, losing its shape, little by little, along the way.’ (Imogen Greenhalgh, 2018, Studio International). As the artist passed away, I feel that she knows the work will soon ‘pass away’ with her, and the memories of the space as well. The people who have relation with the space is no longer exist, the work and the building itself will become less meaningful for people in the future. A sense of letting go of the history. A beauty of incapable of the work, memory and the history. Do Ho Suh, an artist who is also taking the outlook of buildings and objects to discover the concept of a space, both physical and emotionally. He measures all parts of the space and remake it by silk and metal armature. 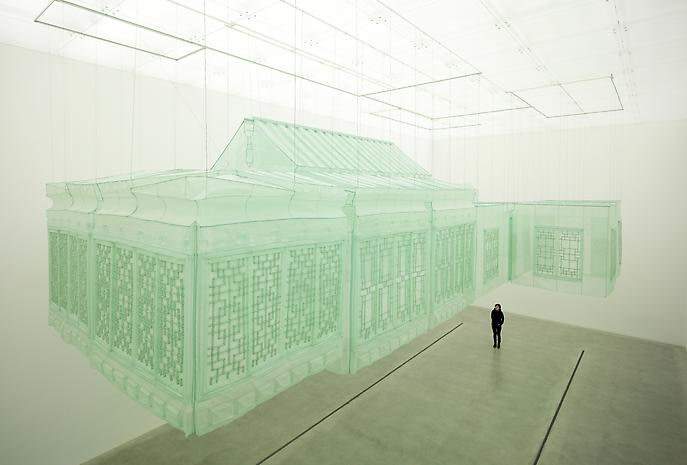 The transparency, the theme and the display, are like Heidi Bucher’s work, but the difference between them is that Do Ho Suh’s work will remain unchanged in time, which can be preserve forever, just like time stops in a moment. Whereas, Heidi Bucher’s work keep changing every moment, the color and texture of the work is unperceivable because of the material. The material and the content matches perfectly and even make it sublimate. The place disappeared, the memory is disappearing, and the work will be disappeared, it is all a process and as one.

One thing that worth to notice about the work is that it will slowly fade away as the artist wanted to by the materiality. As people will have a feeling with the work as they stay together for a long time, but one day it will fade away and disappear, like life. Some people want to preserve it unchanged, but the aim of the work itself is to change and disappear. There is contradiction but also a beauty of evanescent. From the time of the work ‘finished’ to now, its already 30 years. A historical building from the 18th century, maybe there are still some people who can relate with it physically. But imagine 50 years later, everything would be changed, no one can ever relate to the building anymore. ‘A related notion, also designed to avoid the isolation of art from the “ordinary” world.’ (Lippard, L, 1997, p. 8) Perhaps, the world does not need the work anymore, it may be better for a sad history and memory to be forgotten. Other than keeping the memory and space physically, it is better to be kept in mind. It is just a concept. The work is progressing with time, and itself.