The famous Mexican painter Frida Kahlo created the Autorretrato con Mono y Perico painting. This portrait was painted in 1942 and is part of the Contemporary Art from Mexico. The measurements of the painting are 21” x 17”. This is Frida’s self-portrait and she included her dearly loved pets. The spider monkey, named Fulang Chang, was a gift from her husband Diego River, a contemporary Mexican artist. The Amazon parrot used in the portrait was named Bonito. Frida used Óleo sobre fibra dura, which means Oil on Masonite, to paint her self-portrait. The colors that she used on her portrait are bright and joyful.[1] Those bright and joyful colors presented her emotional state at the very moment of her life. This portrait was temporarily displayed at the Houston Museum of Fine Arts. It is part of a spotlight gallery talk, which one can explore the 20th century, renowned Mexican artist Frida Kahlo and Diego Rivera. This exhibition was temporality displayed at the Museum of Fine Arts, Houston, Modern and Contemporary, Masterworks from the Malba, Fundación Costantini.[2] This exhibition was temporarily displayed in order for art lovers, students and teachers to learn more from the 20th-century Mexican artist like Frida Kahlo and Diego Rivera.

Magdalena Carmen Frida Kahlo y Calderon was her full name but everyone knew her as Frida Kahlo. She came to the world on July 6, 1907. She was born in her parents’ house called “La Casa Azul” (The Blue House) which is located in the city of Coyoacan in Mexico City. At the age of six, she contracted polio, and her left right leg thinner than the other one. The Bus accident and polio changed Frida’s life incessantly. That is why you will always see Frida wearing long skirts or dresses in her portraits in order to disguise that. She suffered from a dislocated right foot and shoulder. She also suffered from a broken collarbone rib, spinal column, and foot. Her recovery journey in a full body cast lasted for about three months. Frida eventually recovered from the post-traumatic bus accident. She was able to walk again with a limp. Even though she recovered, she would still have a great pain for the rest of her life. While she was in bed recovering, her love for painting grew. In 1925, she was forced to drop out of the Preparatoria, where she studied art.[3] Kahlo also received some training from her father, Guillermo.[4] Guillermo, who was a photographer and an amateur watercolorist.[5] Frida was an astute observer; she would observe many of the leading trends of the 1920s.[6] Children’s art and some early points of Surrealism were included in the leading trends.[7] The Contemporáneos also inspired Frida, which was a more intimate approach to art making and provided an alternate view of the modern city.[8]

Frida has suffered most of her life, due to polio and the bus accident. In August 1929, Frida married Diego Rivera, who was a famous Mexican mural painter. Her marriage with Diego Rivera was not always rainbows and flowers. Her relationship with Diego was stormy because of his infidelity.  At times, they were passionate with each other and other times it was the opposite. Another major issue they faced was that Frida could not have any children and that was a major issued in their marriage.[9] Frida wanted children and Diego did not want children because of his career, it required him to do a lot of traveling. Diego was not worried about having children since he already had children from his previous marriage. Diego Rivera influenced most of Frida’s portraits. Through her portraits, she paints based on her emotions. She always painted reality and never dreams. Most of her portraits are self- portraits and are based on events that she was going through at the moment or events that she had suffered in the past.[10] Her portraits always have Mexican symbols presents, such as indigenous people and feminism.[11] The themes displayed in her portraits were pain and passion. Most of Frida’s portrait are about herself because she often felt alone and painting was her way of expressing her deep emotions.

The Autorretrato con Mono y Perico painting represent her aspect in life. Bonito the Amazon parrot and Fulang Chang the spider monkey surround her. Since Frida was incapable of having children, animals were considered substitution for kids. The portrait was done with rigorously controlled strokes throughout the portrait, except in the feathers of the parrot and the fur of the monkey.[12] The direct frontal presentation of the model that Frida did is part of the 19th-century portraits.[13] The colors that she used on her portrait are bright and joyful because that is where her emotional state was. At this point in life, Frida was happy. Frida’s work was not officially Surrealist, but the movement liberated her to discover her inner fears and desires.[14] To be able to explore her personal experience instead of public issues. [15]

Frida was influenced by the indigenous Mexican culture for the use of bright colors including dramatic symbolism. In her portrait, she portrayed Fulang Chang and Bonito as solicitous and affectionate symbols. Even though, the monkey is considered to be an emblem of lust in Mexican mythology. The bushy leaves behind Frida represent her love for the gardening that she maintained at her house, La Casa Azul. The portrait shows her thick bushy eyebrows, which were her trademark. On the portrait, you can see that she tied up her hair in an elegant braid to show off her graceful neck.

Frida Kahlo painted herself the way she was in real life and what was happening in her life at the very moment. All of her portraits were based on her personal life experience, starting from the bus accident and even painting herself in her deathbed. My overall experience of visiting the Museum of Houston Fine arts was remarkable. I do wish they created more exhibitions on Frida’s portraits in order to be able to admire and study more about them. Within those twenty minutes of the spotlight talk, I learned so much about Frida’s personal life. I was fortunate enough to have been able to visit this exhibition a couple of years ago. The exhibition was successful because I learned what inspired Frida to paint and her reasons behind her portraits. I was able to view Frida’s portraits up close. I was so amazed and moved on the stories behind the portraits. I have always been a fan of Frida’s portraits because of the amazing tragic stories behind them. Frida did not care about how she looked and did not care about other people’s opinion. Frida had her own personality. This portrait really got attention, The Autorretrato con Mono y Perico because she really loved her animals and the colors she used on it. In her portrait, you can tell how important her animals were to her. Since Frida was not able to have any children, she loved her animals, as they were actually her own children. 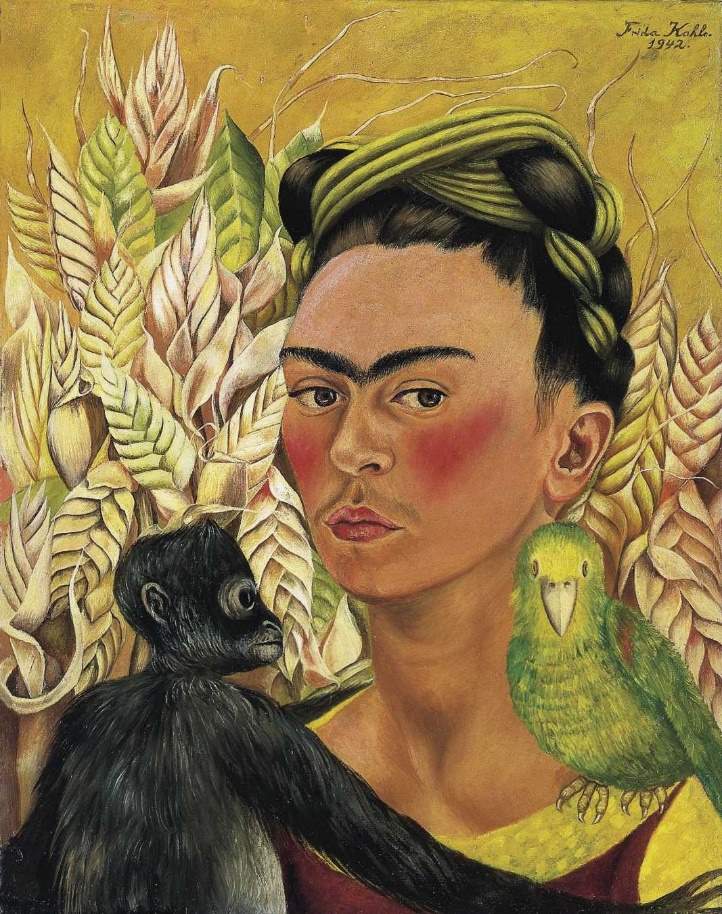