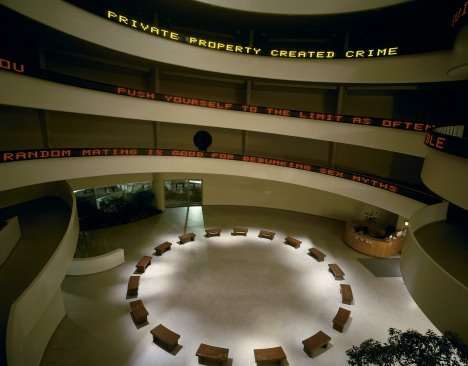 Untitled is a piece of art by Jenny Holzer that was located in the main lobby of the Solomon R. Guggenheim museum in 1989. Selections of phrases are presented in LED lights that follow the spiral ramp, drawing the eye gradually upwards. Constantly moving and changing, the sentences are presented in a variety of colors and fonts in all capital letters. On the floor below are marble benches arranged in a circle which have additional phrases etched into them. From every angle, the viewer is given a new statement to read. The phrases Holzer included make stances about several areas of interest, for example political, social, and personal. In figure 1, the top level of electronic text reads “PRIVATE PROPERTY CREATED CRIME”. This sentence exemplifies her style of writing, which involves making bold claims that are a matter of opinion. Holzer’s writings, as well as the materials she uses to present them, are designed to make the viewer react strongly, causing them to call into question what is presented to them as “truth” on a daily basis.

Holzer uses her materials to make a comparison to the media. By using LED lights as her method of expressing her writing, Holzer shows that her message is for the public. LEDs are familiar to most people because we see them in everyday life. In cities they are used to display the names of hotels, restaurants, casinos, and other businesses. They can also be found on buildings to inform breaking news, or advertise products. Viewers can react to her phrases similarly to the way they would react to a headline news story. Underneath the LEDs are seventeen marble benches with her texts etched on the tops and sides of them. The benches contrast the LED boards because instead constantly changing; they are static and have a sense of permanence. While the physical structures Holzer uses are important, the messages written on them are what Holzer uses to provoke further thought.

The content of Holzer’s work is significant because it provokes thought. Her piece in the Guggenheim included texts from several of her past collections of writings. The collections she chose from were Truisms, Inflammatory Essays, The Living Series, The Survival Series, Under a Rock, and Laments. “Truisms”, which she wrote in the late 1970s, is a body of one-liners, slogans, and aphorisms. The stances they take are difficult to categorize because it seems like they come from a variety of perspectives. The intentions of the “Truisms” are not clear, but they all act to surprise the reader. For example, MONEY CREATES TASTE and AN ELITE IS INEVITABLE are thought provoking, but do not demand action from the reader. This aspect of her work will change in later writings.

Holzer’s next body of writing was called “Inflammatory Essays”. In this series, her phrases were more forceful and assertive than “Truisms”. The essays are aggressive from beginning to end, and are sequences of private thought. At times her statements contradict each other, for example the beginning of one of her essays reads “DON’T TALK DOWN TO ME. DON’T BE POLITE TO ME.” According to Terry Barrett, “The essays show how language, truth, force, and power can pervert each other” (Barrett 1994, 60). In other words, this way of writing serves to confuse the reader, and possibly make them question what is presented to them as “truth”.

The difference between “Truisms” and her later collections “Living” and “Survival” is that the intentions of her work become clearer. Although the texts in these series do not have a unifying purpose, many of them act to advertise, instruct, or cause emotional reactions. Several phrases in “Survival” provoke fear and uncertainty. For instance, THE BEGINNING OF THE WAR WILL BE SECRET, and YOU ARE TRAPPED ON THIS EARTH SO YOU WILL EXPLODE suggest that the future will be dangerous.

“Under a rock” is written from the perspective of someone who has experienced or witnessed dark crimes, such as murder and terrorism. The collection is made up of gory and disturbing descriptions that involve pain. This is a similar theme to her other collection, “Laments”.

“Laments” is Holzer’s most political collection of phrases. For this series, she uses her imagination to create voices for innocent lives lost in the AIDS epidemic happening at the time. According to Paula Geyh, “In Laments, Holzer sought to give voice to the final thoughts of the dead, to give them a chance to say what they couldn’t say”(Geyh 2002, 178). It is significant that this is her first series in which she uses the pronoun “I”. Instead of writing from an outsider’s perspective, this series is much more based on an individual. She used her anger about the death toll of the disease to make a political statement that there was no good reason for that many people to die.

Untitled at the Guggenheim was a display of language that publicized Holzer’s private thought. She demonstrates a variety of perspectives in her writing that details the human condition. Her materials she used to present her writing gave her work a sense of importance to the public. The exhibit was designed to provoke thought and emotions. The unifying theme in all of the texts that are a part of Holzer’s exhibit is that they impose reactions on the viewer, making them rethink what they believe to be “truth”.