Explain how and why the choices Ai Weiwei makes in his artmaking practice are shaped by his experiences. 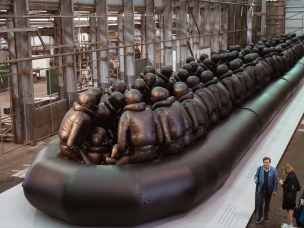 From the age of 62, Ai Weiwei is now known as one of the most influential Chinese artists living today. Weiwei was born on May 18th 1957 in Beijing china with his parent’s. He focuses on sculpture, photography and installation for his main artworks. Because of how Weiwei lived his life, he is able to express himself through these pieces of art, some examples being ‘law of the journey’(2017, reinforced PVC with aluminium frame, 60 x 6 x 3 m.) and ‘Sunflower Seeds’(approx. five metres in diameter.)  The change of culture and politics around him would have also varied, expanding on the backstory of his unusual artworks.

One of Weiweis’ most famous art installations, ‘law of the journey’ reflects on the refugee crisis, by the imposing 60m long rubber boat, crammed with 300 faceless humans wearing life vests. His experience focused on advocating the refugee human rights crisis, displays the love and compassion for people who have gone through being forcibly displaced from their homes. Ai Weiwei states “In dealing with refugees we’ve lost our very basic values. In this time of uncertainty, we need more tolerance, compassion and trust for each other, since we are all one, otherwise humanity will face an even bigger crisis.”

As well as his father, Weiwei became exiled following the 2008 earthquake in Sichuan from pressuring the government, leading an investigation to uncover the names of 5000 children who had died from the lack of infrastructure and negligence from the government. From these protests Weiwei was brutally beaten and placed in jail. After this situation, Weiwei had never felt safe in china since, now living in berlin. His emotional connection towards the refugees’ conditions encouraged him to travel to 40 different camos around the world, therefore being awarded with a professorship in berlin.

In the industrial trails of cockatoo island, Weiwei presents his art across multiple locations.

Weiweis, ‘Law of the Journey’, 2017, creates a loud statement by using a large black boat crowed with refugees. This work symbolises the massive humanitarian crisis going on around the world with issues such as refuges going unnoticed. The rubber made for the boat was also fabricated in a chinses factory that also manufactures the precarious vessels used by thousands of refugees attempting to cross the Mediterranean Sea.

Weiweis art installation is joined with a wall of pictures taken by the IPhone on Weiwei upcoming documentary, ‘human flow’. This documentary is accompanied by the artwork, to also highlight the issues of human displacement. Weiweis love for the refugee crisis and his passion for art is beautifully displayed within the piece to warn viewers. Weiwei states that “there is no refugee crisis, but a human crisis” in response to the current humanitarian disaster plaguing the world. Because of this progressive structure rebuilding the most rare acts of human decline, Weiwei pays a powerful tribute to the tragedy that humans are able to put each other in, when wanting the eternal desire of a steady home and sense of belonging. ‘Cube Of Tea’ (67.0 × 60.0 × 60.0 cm) is another amazing piece of art conceptualized by Ai Weiwei. It is made from pure compressed tea, lying on a wood plank. Tea has played a massive role in Chinese history, dating back hundreds of years. One of the most famous, being the Boston Tea Party revolt of 1773, opposing the British Parliament’s tax on tea. Pu’er Tea especially was considered a high-priced commodity, trading for more than $500 a gram. This artwork of tea can be seen to symbolise the complicated relationship between Britain and china, resulting in the two massive opium wars.

Another of Ai Weiwei most memorable art installations is his 2010 ‘sunflower seeds’. This artwork is made from 10 million handcrafted porcelain sunflower seeds placed in a mountain-like fashion. The artwork weighs 10000kg and takes up ten cubic metres in the Tate Modern, Turbine Hall in London. Although the piece can look ‘borning’ the artist had set forth to make it perfect. By doing this, Weiwei requested 2 different layouts for the work.  The first configuration was made in a continuous rectangular or square field to a depth of ten centimetres. By doing this, the ‘bed’ of seeds is confined at all sides. The second configuration is including nothing but the sunflower seeds, which is installed by carefully pouring the seeds from above to form the shape. Any uneven edges can be adjusted by hand at the time of installation. 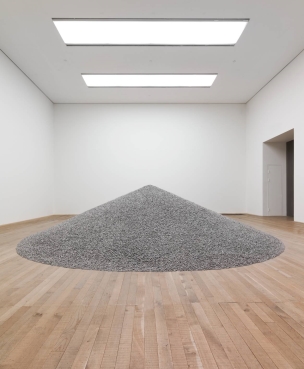 The manufacturing of the sunflower seeds was conducted in the city of Jingdezhen in northern Jiangxi, a region of China south of Beijing. With Jingdezhen being famous for their high-quality porcelain production, they were each handmade and individually crafted in a large-scale factory with a special kind of stone from a particular mountain in Jingdezhen.

The sunflower seeds symbolise the cultural revelation in china around the 1960s and 70s. It was often used as a visual metaphor to describe the country’s communist leader chairman Mao (1893–1976) and, more importantly perhaps, the whole population. Ai Weiwei examines the difference between the complex and simple, the leader and the follower, self and society. This is contrasted in the art piece as every single seed is handmade and individually handcrafted, therefore prompting a deeper thought towards the ‘made in china’ phrase usually implying that something is mass produced.

The mountain of seeds facing the viewer from every angle provokes the thought between an individual living in a mass produced, rapidly transforming society. ‘Sunflower seeds’ explores the viewers mind and how change and difference radically controls outlook on society, as well as prompting the audience to promote individuality.

Ai Weiweis thought-provoking mind-set of bettering the world is displayed beautifully throughout his artworks. Shaped by his past, the underlying techniques that are imbedded in his installations create thought provoking intentions that are made to twist peoples mind. His dramatic actions highlight the widening gap between the ideal and the real in Chinese society.